Microgrid Media - Distributed, Renewable, and Microgrid News. Building Microgrid. How To Build A Microgrid. While developed countries have enjoyed access to reliable electricity for nearly a century, energy access across the world remains one of the greatest challenges of our time. 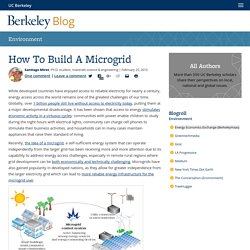 Globally, over 1 billion people still live without access to electricity today, putting them at a major developmental disadvantage. It has been shown that access to energy stimulates economic activity in a virtuous cycles: communities with power enable children to study during the night hours with electrical lights, community can charge cell phones to stimulate their business activities, and households can in many cases maintain appliances that raise their standard of living.

Recently, the idea of a microgrid, a self-sufficient energy system that can operate independently from the larger grid has been receiving more and more attention due to its capability to address energy access challenges, especially in remote rural regions where grid development can be both economically and technically challenging. 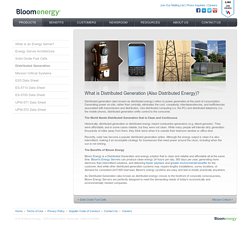 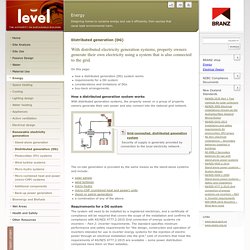 Building Microgrid. How Microgrids Work. This week we’re celebrating the launch of a new series on Energy.gov: How Energy Works. 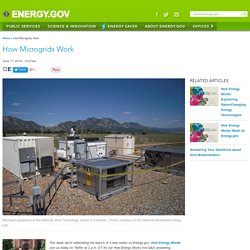 Join us today on Twitter at 2 p.m. ET for our How Energy Works live Q&A answering everything you want to know about microgrids. Use #HowEnergyWorks to submit questions and follow the live discussion. What is a microgrid? A microgrid is a local energy grid with control capability, which means it can disconnect from the traditional grid and operate autonomously. General Microgrids. A microgrid is a discrete energy system consisting of distributed energy sources (including demand management, storage, and generation) and loads capable of operating in parallel with, or independently from, the main power grid. 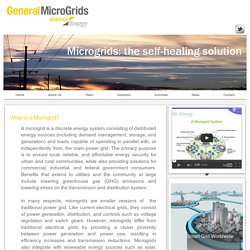 The primary purpose is to ensure local, reliable, and affordable energy security for urban and rural communities, while also providing solutions for commercial, industrial, and federal government consumers. Benefits that extend to utilities and the community at large include lowering greenhouse gas (GHG) emissions and lowering stress on the transmission and distribution system. In many respects, microgrids are smaller versions of the traditional power grid. Microgrid. Microgrid is a localized grouping of electricity sources and loads that normally operates connected to and synchronous with the traditional centralized electrical grid (macrogrid), but can disconnect and function autonomously as physical and/or economic conditions dictate.[1] By this way, it paves a way to effectively integrate various sources of distributed generation (DG), especially Renewable Energy Sources (RES). 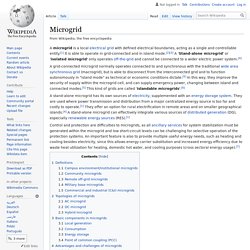 It also provides a good solution for supplying power in case of an emergency by having the ability to change between islanded mode and grid-connected mode. On the other hand, control and protection are big challenges in this type of network configuration,[2] which is generally treated as a hierarchical control. Definition[edit] Galvin Electricity Initiative. Microgrids are modern, small-scale versions of the centralized electricity system. 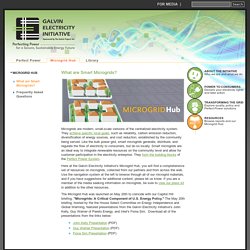 They achieve specific local goals, such as reliability, carbon emission reduction, diversification of energy sources, and cost reduction, established by the community being served. Like the bulk power grid, smart microgrids generate, distribute, and regulate the flow of electricity to consumers, but do so locally. Smart microgrids are an ideal way to integrate renewable resources on the community level and allow for customer participation in the electricity enterprise.

They form the building blocks of the Perfect Power System. Here at the Galvin Electricity Initiative's Microgrid Hub, you will find a comprehensive set of resources on microgrids, collected from our partners and from across the web. The Microgrid Hub was launched on May 20th to coincide with our Capitol Hill briefing, "Microgrids: A Critical Component of U.S. Microgrid Definitions. Below are the definition wordings from the U.S. 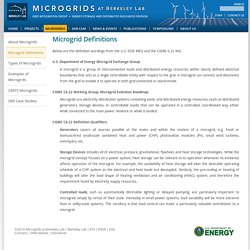 DOE MEG and the CIGRE 6.22 WG. U.S. Department of Energy Microgrid Exchange Group: A microgrid is a group of interconnected loads and distributed energy resources within clearly defined electrical boundaries that acts as a single controllable entity with respect to the grid. A microgrid can connect and disconnect from the grid to enable it to operate in both grid-connected or island-mode. Building Microgrid. A microgrid is a localized grouping of electricity sources and loads that normally operates connected to and synchronous with the traditional centralized grid (macrogrid), but can disconnect and function autonomously as physical and/or economic conditions dictate. 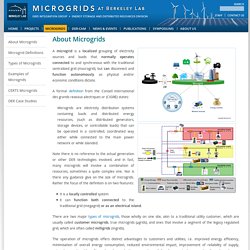 A formal definition from the Conseil international des grands réseaux électriques or (CIGRÉ) states: Microgrids are electricity distribution systems containing loads and distributed energy resources, (such as distributed generators, storage devices, or controllable loads) that can be operated in a controlled, coordinated way either while connected to the main power network or while islanded. Note there is no reference to the actual generation or other DER technologies involved, and in fact, many microgrids will involve a combination of resources, sometimes a quite complex one. Nor is there any guidance give on the size of microgrids. Rather the focus of the definition is on two features: Related Links: