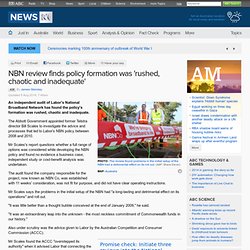 The Abbott Government appointed former Telstra director Bill Scales to investigate the advice and processes that led to Labor's NBN policy between 2008 and 2010. Mr Scales's report questions whether a full range of options was considered while developing the NBN policy and found no evidence a business case, independent study or cost-benefit analysis was undertaken. The audit found the company responsible for the project, now known as NBN Co, was established with 11 weeks' consideration, was not fit for purpose, and did not have clear operating instructions. NBN Co pricing under spotlight. Build a business case: developing custom apps NBN Co is considering revising its wholesale pricing model, and has approached the industry for comment. 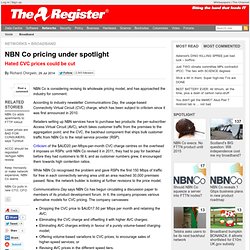 According to industry newsletter Communications Day, the usage-based Connectivity Virtual Circuit (CVC) charge, which has been subject to criticism since it was first announced in 2010. Netflix fail proves copper NBN leaves Australia utterly 4Ked. I ran into my friend Tom the other day. 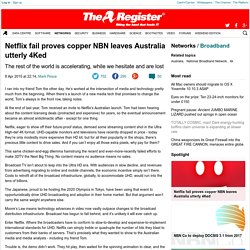 He’s worked at the intersection of media and technology pretty much from the beginning. When there’s a launch of a new media tech that promises to change the world, Tom’s always in the front row, taking notes. At the end of last year, Tom received an invite to Netflix’s Australian launch. Tom had been hearing about the content licensing deals (protracted and expensive) for years, so the eventual announcement became an almost anticlimactic affair - except for one thing. Netflix, eager to show off their future-proof status, demoed some streaming content shot in the Ultra High-def 4K format. Submarine Cable Map. SEA-ME-WE 3. SEA-ME-WE 3 or South-East Asia - Middle East - Western Europe 3 is an optical submarine telecommunications cable linking those regions and is the longest in the world, completed in late 2000. 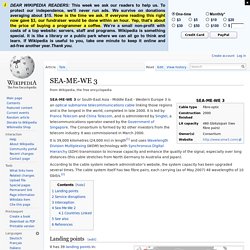 It is led by France Telecom and China Telecom, and is administered by Singtel, a telecommunications operator owned by the Government of Singapore. The Consortium is formed by 92 other investors from the telecom industry. It was commissioned in March 2000. It is 39,000 kilometres (24,000 mi) in length[1] and uses Wavelength Division Multiplexing (WDM) technology with Synchronous Digital Hierarchy (SDH) transmission to increase capacity and enhance the quality of the signal, especially over long distances (this cable stretches from North Germany to Australia and Japan). 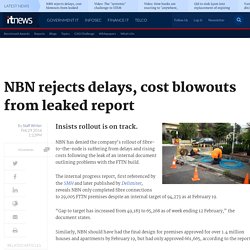 The internal progress report, first referenced by the SMH and later published by Delimiter, reveals NBN only completed fibre connections to 29,005 FTTN premises despite an internal target of 94,273 as at February 19. “Gap to target has increased from 49,183 to 65,268 as of week ending 12 February,” the document states. Similarly, NBN should have had the final design for premises approved for over 1.4 million houses and apartments by February 19, but had only approved 661,665, according to the report. It attributed the gaps to power and supply issues as well as a number of completions under review. 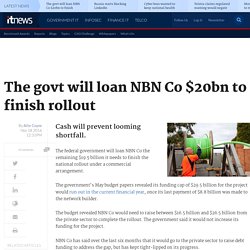 The government's May budget papers revealed its funding cap of $29.5 billion for the project would run out in the current financial year, once its last payment of $8.8 billion was made to the network builder. NBN boss Bill Morrow denies Government 'rescue' loan. Updated NBN Co chief executive Bill Morrow says the $49 billion project is rolling out on time and on budget, despite having to secure a special loan from the Federal Government late last year. 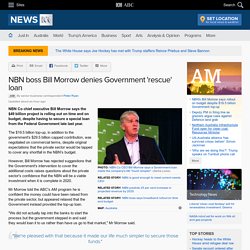 NBN Co won't say how many ADSL users will end up on satellite - Telco/ISP - iTnews. NBN Co has refused to disclose how many premises with existing ADSL connections will be offered only satellite services in future, revealing what users have now is “not so much a driver of NBN’s technology choice”. 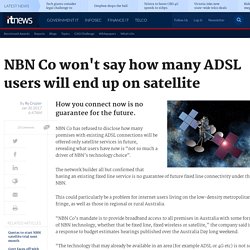 The network builder all but confirmed that having an existing fixed line service is no guarantee of future fixed line connectivity under the NBN. This could particularly be a problem for internet users living on the low-density metropolitan fringe, as well as those in regional or rural Australia. “NBN Co’s mandate is to provide broadband access to all premises in Australia with some form of NBN technology, whether that be fixed line, fixed wireless or satellite,” the company said in a response to budget estimates hearings published over the Australia Day long weekend. NBN Co will expand FTTC to 1 million premises - Telco/ISP - iTnews. NBN Co will bring fibre-to-the-curb technology to an extra 300,000 premises, expanding its FTTC footprint to 1 million homes and businesses. 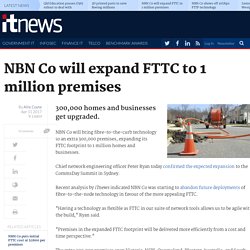 Chief network engineering officer Peter Ryan today confirmed the expected expansion to the CommsDay Summit in Sydney. Recent analysis by iTnews indicated NBN Co was starting to abandon future deployments of fibre-to-the-node technology in favour of the more appealing FTTC. "Having a technology as flexible as FTTC in our suite of network tools allows us to be agile with the build," Ryan said.

"Premises in the expanded FTTC footprint will be delivered more efficiently from a cost and time perspective. " The extra 300,000 premises span Victoria, NSW, Queensland, Western Australia, and South Australia, he said. But before NBN Co scales up the FTTC rollout, it will first pilot its deployment and test its processes, systems, and operations of the distribution point units that house the FTTC equipment in the street.

Nbn™ gets its wish: Australian ISPs' performance to be rated. Doesn't go far enough ...that compel them to advertise typical internet speeds users will experience at peak times, rather than theoretical headline speeds. 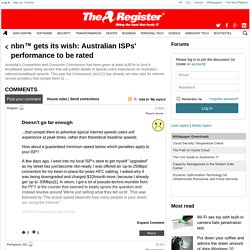 How about a guaranteed minimum speed below which penalties apply to your ISP? A few days ago, I went into my local ISP's store to get myself "upgraded" as my street has just become nbn-ready.