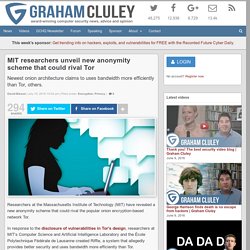 In response to the disclosure of vulnerabilities in Tor's design, researchers at MIT’s Computer Science and Artificial Intelligence Laboratory and the École Polytechnique Fédérale de Lausanne created Riffle, a system that allegedly provides better security and uses bandwidth more efficiently than Tor. Zuckerberg's Internet.org aims to bring Internet to the world.

Mark Zuckerberg has formed a global partnership with a group of tech companies that aims to bring affordable Internet access to the world. 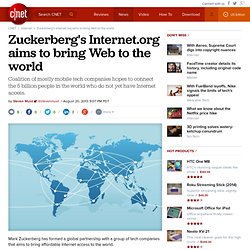 The Facebook chief executive announced Tuesday that the social network has partnered with the likes of Ericsson, Nokia, and Samsung to form Internet.org, which aims to deliver the Internet to the 5 billion people in the world without access. "Everything Facebook has done has been about giving all people around the world the power to connect," Zuckerberg said in a statement. "There are huge barriers in developing countries to connecting and joining the knowledge economy. Internet.org brings together a global partnership that will work to overcome these challenges, including making internet access available to those who cannot currently afford it. " Chief among those goals is providing affordable access, including making mobile connectivity more affordable. Focusing on mobile access seems key for the initiative's success. Dustin Moskovitz, founder of Facebook and Asana, wants to see the end of the work email.

The Quiet Before the Next IT Revolution. 512KDay: How the internet just BROKE under its own weight. Boost IT visibility and business value Yesterday, 12 August, 2014, the internet hit an arbitrary limit of more than 512,000 routes. 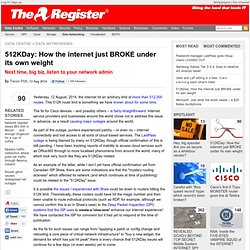 How will you pay for the internet of the future? How much is Facebook worth? 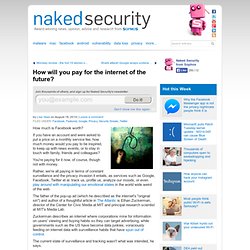 If you have an account and were asked to put a price on a monthly service fee, how much money would you pay to be inspired, to keep up with news events, or to stay in touch with family, friends and colleagues? You're paying for it now, of course, though not with money. TheExplodingWhale.com. 16 Searches You Can Run on Wolfram Alpha That Don't Work on Google. Privacy is starting to seem like a very 20th-century anomaly. Chet Kanojia Starry CEO interview. Tim Stenovec/Tech InsiderChet Kanojia at Starry's launch earlier this year. 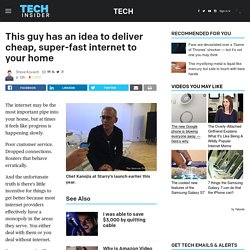 The internet may be the most important pipe into your home, but at times it feels like progress is happening slowly. Poor customer service. Dropped connections. We bet your firm doesn't stick to half of these 10 top IT admin tips. IT is perceived in mixed ways by users. 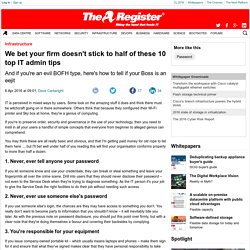 Some look on the amazing stuff it does and think there must be witchcraft going on in there somewhere. Cloudflare vs Tor: Is IP Blocking Causing More Harm than Good? Onename. Keybase. Is There a Safe Way to Transmit Confidential Data and Documents? 2015 was a bad year for data security—it started and ended with a series of high-profile cybersecurity attacks. 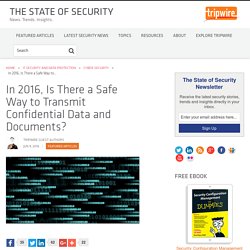 No industry was spared, from health-care disasters (think of the CareFirst BlueCross BlueShield breach in May 2015) to financial organizations, from higher-education entities and federal markets to even the security industry itself (with the hacking of LastPass, a password management tool). Service opened on new Asia Pacific cable - Telco/ISP - iTnews. A new 10,900 kilometre cable system connecting the major economies in East and South East Asia has officially been completed seven years after the project commenced. 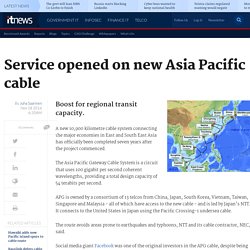 The Asia Pacific Gateway Cable System is a circuit that uses 100 gigabit per second coherent wavelengths, providing a total design capacity of 54 terabits per second. APG is owned by a consortium of 13 telcos from China, Japan, South Korea, Vietnam, Taiwan, Singapore and Malaysia - all of which have access to the new cable - and is led by Japan's NTT. It connects to the United States in Japan using the Pacific Crossing-1 undersea cable. Catching up with the guy who stole Half-Life 2’s source code, 10 years later. At 6am on May 7, 2004, Axel Gembe awoke in the small German town of Schönau im Schwarzwald to find his bed surrounded by police officers bearing automatic weapons. 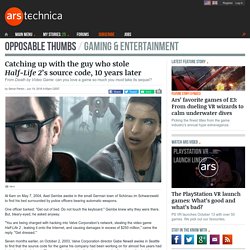 One officer barked: "Get out of bed. Do not touch the keyboard. " From file-sharing to prison: A Megaupload programmer tells his story. Soon after the domain was registered in Hong Kong, the now-defunct Megaupload.com grew into one of the world's most popular file-sharing sites. 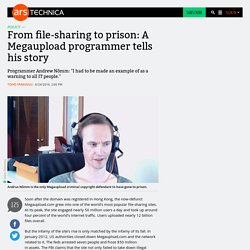 At its peak, the site engaged nearly 50 million users a day and took up around four percent of the world's Internet traffic. Users uploaded nearly 12 billion files overall. But the infamy of the site's rise is only matched by the infamy of its fall. In January 2012, US authorities closed down Megaupload.com and the network related to it. The feds arrested seven people and froze $50 million in assets. In total, seven men associated with the site were arrested and indicted on 13 charges (including copyright infringement and money laundering). Will the MOAB (Mother Of all AdBlockers) finally kill advertising?