Why Morgan Stanley Is Betting That Tesla Will Kill Your Power Company. Shaping the Fourth Industrial Revolution by Klaus Schwab. Bypassing the Bankers - William D. Cohan. Matt Chase One of the more hopeful consequences of the 2008 financial crisis has been the growth of a group of small companies dedicated to upending the status quo on Wall Street. 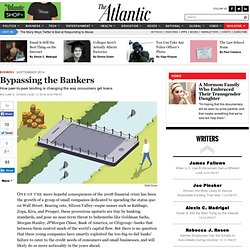 Bearing cute, Silicon Valley–esque names such as Kabbage, Zopa, Kiva, and Prosper, these precocious upstarts are tiny by banking standards, and pose no near-term threat to behemoths like Goldman Sachs, Morgan Stanley, JPMorgan Chase, Bank of America, or Citigroup—banks that between them control much of the world’s capital flow. But there is no question that these young companies have smartly exploited the too-big-to-fail banks’ failure to cater to the credit needs of consumers and small businesses, and will likely do so more noticeably in the years ahead. At the forefront of the group is Lending Club, a San Francisco–based company founded in 2007 by Renaud Laplanche, a serial entrepreneur and former Wall Street attorney. Worker fired for disabling GPS app that tracked her 24 hours a day [Updated]

(This story has been updated with comments from the plaintiff's attorney.) 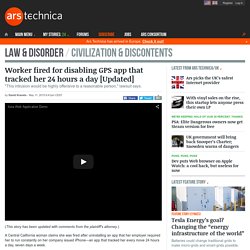 A Central California woman claims she was fired after uninstalling an app that her employer required her to run constantly on her company issued iPhone—an app that tracked her every move 24 hours a day, seven days a week. Plaintiff Myrna Arias, a former Bakersfield sales executive for money transfer service Intermex, claims in a state court lawsuit that her boss, John Stubits, fired her shortly after she uninstalled the job-management Xora app that she and her colleagues were required to use. According to her suit (PDF) in Kern County Superior Court: After researching the app and speaking with a trainer from Xora, Plaintiff and her co-workers asked whether Intermex would be monitoring their movements while off duty. 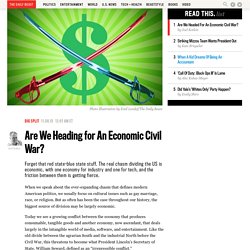 The real chasm dividing the US is economic, with one economy for industry and one for tech, and the friction between them is getting fierce. When we speak about the ever-expanding chasm that defines modern American politics, we usually focus on cultural issues such as gay marriage, race, or religion. But as often has been the case throughout our history, the biggest source of division may be largely economic. The world economic order is collapsing and this time there seems no way out. Short Selling: What Is Short Selling? The Economics of Jane Austen. Is EM turmoil the third wave of the financial crisis? Goldman thinks so. Emerging markets aren't just suffering through another market rout -- it's a third wave of the global financial crisis, Goldman Sachs said. 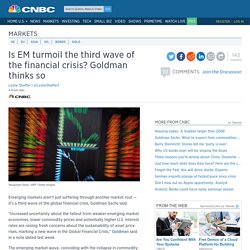 "Increased uncertainty about the fallout from weaker emerging market economies, lower commodity prices and potentially higher U.S. interest rates are raising fresh concerns about the sustainability of asset price rises, marking a new wave in the Global Financial Crisis," Goldman said in a note dated last week. The emerging market wave, coinciding with the collapse in commodity prices, follows the U.S. stage, which marked the fallout from the housing crash, and the European stage, when the U.S. crisis spread to the continent's sovereign debt, the bank said.

Read More Asia's mighty market bounceback Concerns that the U.S. Federal Reserve would raise interest rates for the first time in nine years spurred a massive outflow of funds from emerging markets, including Asia's, recently. The last 30 years of global economic history are about to go out the window. From outside, the Butcherei Lindinger looked like any of the other kink shops in Schöneberg, Berlin’s historic gay district. 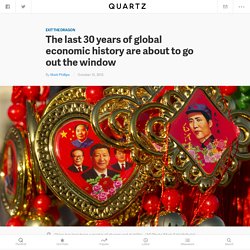 One mannequin in the window was accessorized with a ball gag; another wore what appeared to be a leather diving mask of sorts, connected to a metal leash. Inside, the store was brightly lit, its walls lined with leather jackets, vests, pants, and harnesses. Shiny steel sex toys shone on a shelf. A glass case held items I couldn’t quite identify, but which looked medical in nature. (A urine bag was apparent thanks to its label.) I had spent the previous few days covering Berlin Fashion Week, and had seen some impressive shows, to be sure. The end of capitalism has begun.

The red flags and marching songs of Syriza during the Greek crisis, plus the expectation that the banks would be nationalised, revived briefly a 20th-century dream: the forced destruction of the market from above.

For much of the 20th century this was how the left conceived the first stage of an economy beyond capitalism. Banks exploit your personal data to stave off competitors. There is a legal question over customers' privacy. 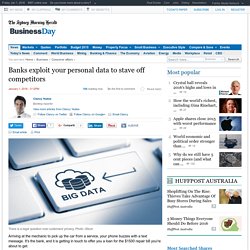 The Death of Bank Products has been greatly under-exaggerated. Since 2005 I’ve been predicting the decline of branch banking. 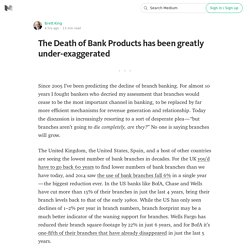 For almost 10 years I fought bankers who decried my assessment that branches would cease to be the most important channel in banking, to be replaced by far more efficient mechanisms for revenue generation and relationship. Gated content millennials mobiles money. Are we witnessing the end of globalization?

It starts with a woman. 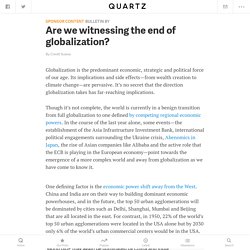 She’s beautiful, and wears an exquisite shimmering gold dress. GEOFF DAVIES. Brexit, Trump and a Rigged System. Part 1 of 2. Life-supporting Economies, Quality of Life, Enduring Society, Australia, Gaia. Most of us do not want the world our society has become. 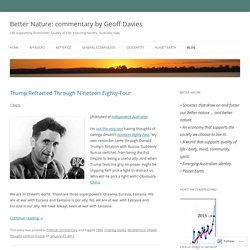 Theconversation. Research shows that the human brain is biased in favour of making safe choices. This is part of the drive behind “securitisation”, where the financial sector turns risky debt into “safe” debt by pooling assets together or carving out the safe bits. But this debt may not be as safe as we think. And as individual traders load up on “safe” debt, they are putting us collectively at risk of another financial crisis.

This exact scenario has led to previous financial crises. ALLAN PATIENCE. Is globalization ending? It is the fashion to declare that globalization is coming to an end. Evidence for this includes: nationalism being on the rise; protectionist policies making a come-back; borders being slammed shut; populist politicians multiplying at rabbit-like rates.