Five Totally Believable Things Car Makers Must Do To Thwart Hackers. How hackers could slam on your car's brakes - Aug. 1, 2014. NEW YORK (CNNMoney) A report shared exclusively with CNNMoney shows that the 2014 Jeep Cherokee, 2015 Cadillac Escalade and 2014 Toyota Prius were the most 'hackable' of 20 car models reviewed by automotive security researchers. 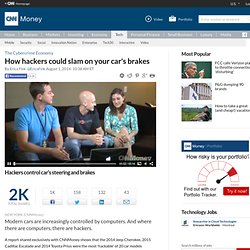 Why you’ll never drive your car with a joystick. The very earliest automobiles used tillers to control their steering, but by the turn of the century the nascent car industry settled on using a wheel to control the steering, perhaps taking inspiration from boats. 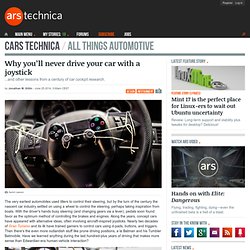 With the driver's hands busy steering (and changing gears via a lever), pedals soon found favor as the optimum method of controlling the brakes and engines. Along the years, concept cars have appeared with alternative ideas, often involving aircraft-inspired joysticks. Nearly two decades of Gran Turismo and its ilk have trained gamers to control cars using d-pads, buttons, and triggers. Then there's the even more outlandish stuff like prone driving positions, a la Batman and his Tumbler Batmobile. Have we learned anything during the last hundred-plus years of driving that makes more sense than Edwardian-era human-vehicle interaction? At first glance, the answer is no, not really. US feds want cars conversing by 2017. New US cars and light trucks will soon be equipped with crash-avoidance vehicle-to-vehicle (V2V) communications systems, says the US Department of Transportation's National Highway Traffic Safety Administration (NHTSA). 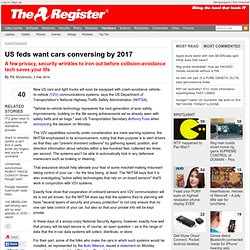 "Vehicle-to-vehicle technology represents the next generation of auto safety improvements, building on the life-saving achievements we've already seen with safety belts and air bags," said US Transportation Secretary Anthony Foxx when announcing the decision on Monday. The V2V capabilities currently under consideration are mere warning systems, the NHTSA emphasized in its announcement, noting that their purpose is to alert drivers so that they can "prevent imminent collisions" by gathering speed, position, and direction information about vehicles within a few hundred feet, collected ten times per second. The systems won't be able to automatically kick in any defensive maneuvers such as braking or steering. Potholes abound on the road to car-to-car communication.

Early on the last morning of CES, I found myself in a Las Vegas parking lot signing a liability waiver. 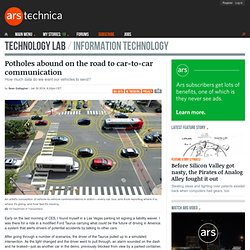 Self-HEALING BATTERY could make electric cars practical at last. Stanford researchers say they have cracked a key problem holding back lithium-ion batteries: which might make the next generation of phones, e-cars and other battery powered equipment a whole lot better. 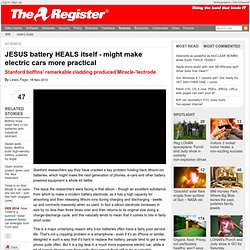 The issue the researchers were facing is that silicon - though an excellent substance from which to make a modern battery electrode, as it has a high capacity for absorbing and then releasing lithium ions during charging and discharging - swells up and contracts massively when so used. In fact a silicon electrode increases in size by no less than three times over and then returns to its original size duing a charge-discharge cycle, and this naturally tends to mean that it comes to bits in fairly short order. Car Dealers Complain To DMV About Tesla's Website. Concern Mounts Over Self-Driving Cars Taking Away Freedom. Google. General Motors. Tesla. Prepare for the part-time self-driving car. Welcome to Ars UNITE, our week-long virtual conference on the ways that innovation brings unusual pairings together. 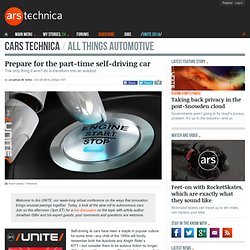 Today, a look at the slow roll to autonomous cars. Join us this afternoon (3pm ET) for a live discussion on the topic with article author Jonathan Gitlin and his expert guests; your comments and questions are welcome. Whoops: The Self-Driving Tesla May Make Us Love Urban Sprawl Again. Ariel Zambelich / WIRED Elon Musk announced last week that the Model S will feature “autopilot,” an ability to take over for the driver in limited situations. 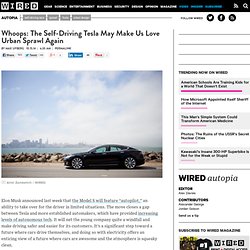 The move closes a gap between Tesla and more established automakers, which have provided increasing levels of autonomous tech. From efficiency to airflow, it’s a golden age for racing tech in our driveways. Why do car companies go racing? 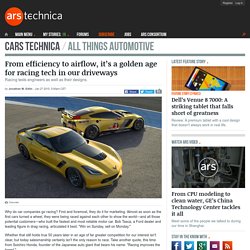 First and foremost, they do it for marketing. Almost as soon as the first cars turned a wheel, they were being raced against each other to show the world—and all those potential customers—who built the fastest and most reliable motor car. Bob Tasca, a Ford dealer and leading figure in drag racing, articulated it best. "Win on Sunday, sell on Monday. " Whether that still holds true 50 years later in an age of far greater competition for our interest isn't clear, but today salesmanship certainly isn't the only reason to race. Considering the source, maybe that's just post-hoc marketing justification. If you want to actually win on Sunday, you have to design, engineer, and build a car that’s better—for the given set of rules—than everybody else who turns up.

This insistence on standardized parts often stems from a goal to keep costs in check. Eric Bangeman The Corvette Z06 street car... BMW Patches Security Flaw That Let Hackers Open Doors. BMW has issued an update to close a security flaw that could have allowed hackers to open the doors of more than two million vehicles. 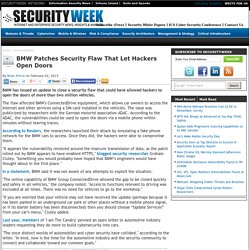 The flaw affected BMW's ConnectedDrive equipment, which allows car owners to access the Internet and other services using a SIM card installed in the vehicles. The issue was publicized by researchers with the German motorist association ADAC. GM to test Cisco technology for sharing road safety spectrum.