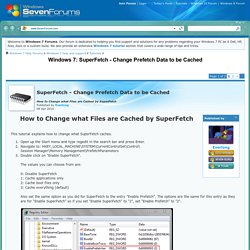 I set them each to 2, to 0 with Superfetch on, disabled, whatever. No matter how I set them it uses nearly half my ram as Standby. Not only that, but if I run no swap file, it pops up Out Of Memory dialog when I have 800 MB on Standby. Deleting files in prefetch folder. How To View Superfetch Cache Contents in Windows 7. Superfetch is one of the reason that makes you feel Windows 7 runs faster and smoother than any of its predecessor, and that’s why you shouldn’t disable it in any case. 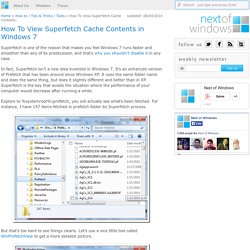 In fact, Superfetch isn’t a new idea invented in Windows 7. It’s an enhanced version of Prefetch that has been around since Windows XP. It uses the same folder name and does the same thing, but does it slightly different and better than in XP. Superfetch is the key that avoids the situation where the performance of your computer would decrease after running a while. Explore to %systemroot%\prefetch, you will actually see what’s been fetched. But that’s too hard to see things clearly. Highlighting any application listed at the top shows you the detail files opened by that application at the bottom. You can also generate a HTML report that gives you a full list of what’s been superfetched. SuperFetch advanced settings? Choosing Apps and Files it. I've had issues with SuperFetch since first installing Vista around 12 months ago. 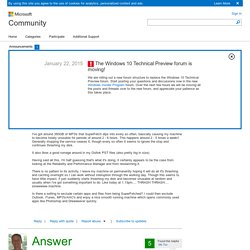 It's now becoming unbearable and highly irritating. I've got around 350GB of MP3's that SuperFetch dips into every so often, basically causing my machine to become totally unusable for periods of around 2 - 6 hours. This happens around 2 - 5 times a week!! Generally stopping the service ceases it, though every so often it seems to ignore the stop and continues thrashing my disk. It also likes a good rumage around in my Outlok PST files (also pretty big in size). Having said all this, i'm half guessing that's what it's doing, it certainly appears to be the case from looking at the Reliability and Performance Manager and from researching it. Why does Win 8.1 still enable Superfetch on my SSD? AnandTech Forums. Windows - Any solid reason to turn off Superfetch and Prefetch for SSD? Hyperlink. Ottimizzazione SSD_-_ SSD empowering. 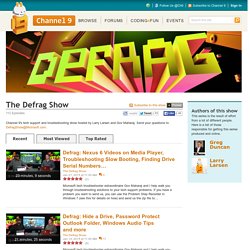 Hyperlink. Ottimizzazione SSD_-_ SSD empowering. Attenzione. SuperFetch: How it Works & Myths. SuperFetch is a technology in Windows Vista and onwards that is often misunderstood. 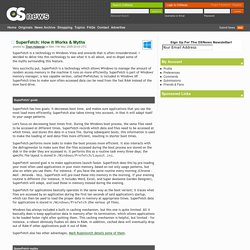 I decided to delve into this technology to see what it is all about, and to dispel some of the myths surrounding this feature. Very succinctly put, SuperFetch is a technology which allows Windows to manage the amount of random access memory in the machine it runs on more efficiently. SuperFetch is part of Windows' memory manager; a less capable version, called PreFetcher, is included in Windows XP. SuperFetch tries to make sure often-accessed data can be read from the fast RAM instead of the slow hard drive. SuperFetch' goals SuperFetch has two goals: it decreases boot time, and makes sure applications that you use the most load more efficiently. Let's focus on decreasing boot times first. SuperFetch performs more tasks to make the boot process more efficient. SuperFetch' second goal is to make applications launch faster. SuperFetch also has other advantages, Mark Russinovich details some of them. How to find prefetch files in windows 8. should i delete the prefetch. 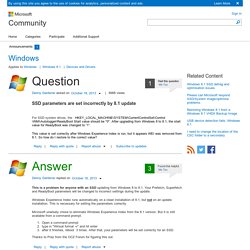 Your Prefetch, Superfetch and ReadyBoot parameters will be changed to incorrect settings during the update. Windows Experience Index runs automatically on a clean installation of 8.1, but not on an update installation. Microsoft unwisely chose to eliminate Windows Experience Index from the 8.1 version. Open a command prompttype in "Winsat formal -v" and hit enterafter it finishes, reboot 3 times.

Thanks to Praz from the OCZ Forum for figuring this out. For SSD system drives, the HKEY_LOCAL_MACHINE\SYSTEM\CurrentControlSet\Control\WMI\Autologger\ReadyBoot Start value should be "0". Can you not just change the number in regedit?? On my system the WEI would not complete in 8.0... PowerShell Incident Response. I am currently working on a PowerShell module that will provide a remote forensic capability for forensicators and incident responders alike. 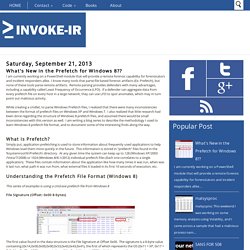 I know many tools that parse file based forensic artifacts (Ex: Prefetch), but none of these tools parse remote artifacts. Remote parsing provides defenders with many advantages, including a capability called Least Frequency of Occurrence (LFO). If a defender can aggregate data from every prefetch file on every host in a large network, they can use LFO to spot anomalies, which may in turn point out malicious activity. Superfetch enabled on my SSD? What is New in Windows Application Execution? One of the great pleasures of performing Windows forensics is there is no shortage of application execution artifacts. 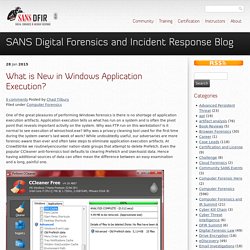 Application execution tells us what has run on a system and is often the pivot point that reveals important activity on the system. SSD parameters are set incorrectly by 8.1 update. SSD services - Superfetch, Prefetch, Optimalization and ReadyBoot on. Hi, I don't know about any of those suggestions... other than the fact that the newer SSDs and Win 8\8.1 do most of that automatically... 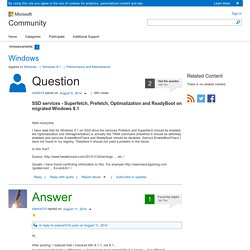 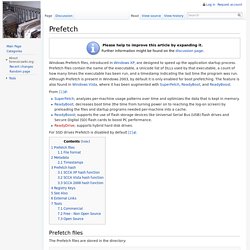 Prefetch files contain the name of the executable, a Unicode list of DLLs used by that executable, a count of how many times the executable has been run, and a timestamp indicating the last time the program was run. SuperFetch. SuperFetch is a performance enhancement introduced in Microsoft Windows Vista to reduce the time necessary to launch applications. SuperFetch works with the memory manager service in Windows to analyze memory usage patterns over time to determine the optimal memory content for a given user for a date or time of day. This differs from the Prefetch technique used in Microsoft Windows XP, which preloads data into memory without analyzing usage patterns. Pages of applications that are used most frequently overall. Pages of applications that are commonly used when resuming: After extensive hibernation (for example, first thing in the morning). After shorter periods of sleep or hibernation (for example, after lunch).

Prefetched pages are added to the system’s standby page list, which has been reorganized and redesigned to retain useful data in memory over longer periods of time.