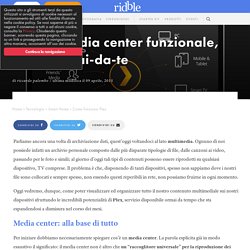 How to Set Up a Home Media Server You Can Access From Any Device. Local media servers have gone out of style. 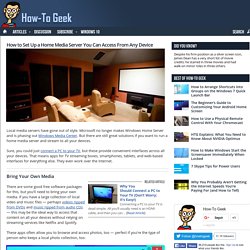 Microsoft no longer makes Windows Home Server and is phasing out Windows Media Center. But there are still great solutions if you want to run a home media server and stream to all your devices. Sure, you could just connect a PC to your TV, but these provide convenient interfaces across all your devices. That means apps for TV streaming boxes, smartphones, tablets, and web-based interfaces for everything else. They even work over the Internet. Building & Configuring the Ultimate Plex Media Server. Enough overview, it’s time to start building. 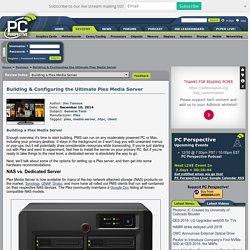 PMS can run on any moderately powered PC or Mac, including your primary desktop. It stays in the background so it won’t bug you with unwanted menus or pop-ups, but it will potentially draw considerable resources while transcoding. If you’re just starting out with Plex and want to experiment, feel free to install the server on your primary PC. But if you’re ready to take things to the next level, a dedicated server is absolutely the way to go. Next, we’ll talk about some of the options for setting up a Plex server, and then get into some hardware recommendations. NAS vs. Plex Media Server is now available for many of the top network attached storage (NAS) products on the market. With Plex on a NAS, you can store your media right on the NAS alongside the server software, and have everything run off of one relatively small package. 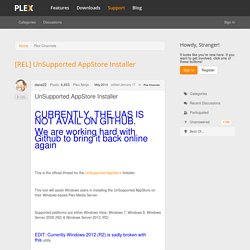 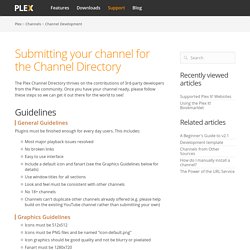 Once you have your channel ready, please follow these steps so we can get it out there for the world to see! Guidelines General Guidelines Plugins must be finished enough for every day users. This includes: Most major playback issues resolvedNo broken linksEasy to use interfaceInclude a default icon and fanart (see the Graphics Guidelines below for details)Use window titles for all sectionsLook and feel must be consistent with other channelsNo 18+ channelsChannels can't duplicate other channels already offered (e.g. please help build on the existing YouTube channel rather than submitting your own) Graphics Guidelines. Creating a plex channel from a youtube video? : PleX. How do I manually install a channel? The code for a Plex channel is contained within a directory named with a ".bundle" suffix. 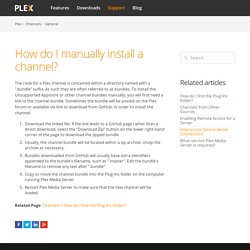 As such they are often referred to as bundles. To install the Unsupported Appstore or other channel bundles manually, you will first need a link to the channel bundle. Sometimes the bundle will be posted on the Plex forum or available via link to download from GitHub. Plex Plug-ins. Adding Streaming Channels to Plex : PleX. Supported Plex It! Websites. Using the Plex It! Bookmarklet. Plex It! 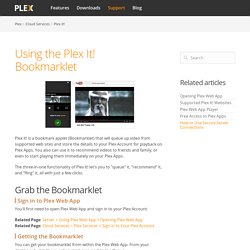 Is a bookmark applet (Bookmarklet) that will queue up video from supported web sites and store the details to your Plex Account for playback on Plex Apps. You also can use it to recommend videos to friends and family, or even to start playing them immediately on your Plex Apps. The three-in-one functionality of Plex It! Let's you to "queue" it, "recommend" it, and "fling" it, all with just a few clicks. Grab the Bookmarklet. It! Dailymotion issue - Plex Forums. Plex Metadata Agents. Untitled. 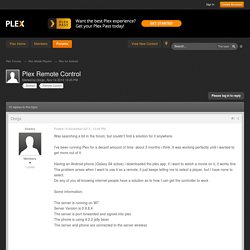 As player (for movies and TV series) I have a fairly recent Samsung smart TV that connects to the NAS and displays the folders I've defined for media in Synology's Media Server app. This is cool (a "latest" folder for TV shows for example) but it's a very basic interface: no thumbnails. So far this plays almost anything I've tried (avi, mkv, mp4) and external subtitles too. I also have a Samsung Galaxy tab3 tablet, with the BubbleUPnP app installed to play-to (or cast, or fling to, or use as remote for) the TV, This app also has the basic folder style interface, but it does play-to all movie types plus subtitles, and as added bonus it displays a seek bar that actually works! - which is missing in the TV's interface. I've been looking to get a better interface ever since I moved from a media center to a NAS set-up. The app does not need any clients or apps on the TV. Scanners & Agents. Media Preparation. Agents. Agents are used to first match your media with on-line databases then fetch information like posters, plot synopsis, etc. 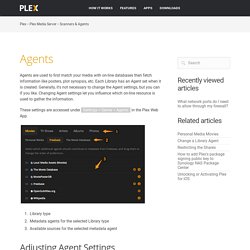 Each Library has an Agent set when it is created. Generally, it's not necessary to change the Agent settings, but you can if you like. Changing Agent settings let you influence which on-line resource is used to gather the information. These settings are accessed under in the Plex Web App. Library typeMetadata agents for the selected Library typeAvailable sources for the selected metadata agent Adjusting Agent Settings. 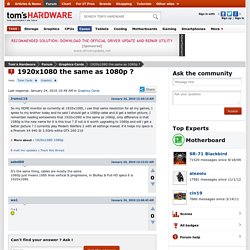 Which means all 1920x1080 pixels are updated in a single pass(Odd & Even Lines). 1080i means Interlace Scan. Which means odd and even lines(horizontal lines) of the 1920x1080 are updated alternately. The effective scan rate is 30HZ. 1080P and 1080I have the same 1920x1080 pixels. 1920x1080 defines the pixel matrix of the screen (i.e. 1920 vertical pixels and 1080 horizontal pixels). HDMI cables are rated base on its category or compliance to HDMI specifications. Below is the path for HDMI information and it includes HDMI cable rating and capability. As i stated HDMI cables are not the same. HDMI 1.3 cable will provide you with the best cable bandwidth for your PC or HDTV. Higher desktop resolution (i.e. 1080P) is always better. Abstract. Server Settings. Merge or Split Items. Merging Items If you have several different versions of the same Movie (maybe a SD and HD version), you can combine them to a single item.

A Plex App will either automatically select the one that suits the device best (SD for a phone, for example) or let you choose which one to play. To Merge two or more items: Open the Library that contains the items you wish to merge.Click the button to enable multi-select.Click on the posters of the items you want merged to select them.Click the button.Click on to confirm the merge and the items are merged. The Merged item now has a number badge that indicates how many items are included.

Note: The first item you select is what all selected items will be merged into. Split Apart Items In some cases "Merged" items can be split apart to reveal the individual items. Transcoder server settings. How to configure plex CentOS6. Now you’ve installed Plex, the next thing to do is configure it! This tutorial will cover how to configure and add media libraries to Plex. A certain amount of technical/hardware knowledge is required for the “transcoding” portion of this tutorial, as you need to know how powerful your server specifications are in correlation to how well your server can transcode.

I will post my own personal recommendations but no configuration will necessarily be perfect, as it also depends on the resolution of the content hosted on your media server and the amount of people using it. ATTENTION INFO.

PLEX: Movies. ATTENTION INFO. TIP: A quick hack to rename seasons. Source Link. Corsair4 comments on [Guide] Plex and Anime. A guide to combining movies and series in a single library and getting the correct metadata. Converting ISO, Video_TS, and Other Disk Image Formats. Plex does not support the use of ISO, IMG, Video_TS, BDMV, or other "disk image" formats. If you wish to use those with Plex, you should convert them to a compatible format. Related Page: Why are ISO, VIDEO_TS, and other Disk Image Formats Not Supported?

There are two broad strategies for converting disk image formats into something much more compatible: Remux the content. Remuxing is quick and retains the full quality of the original source, but the resulting files can be quite large (anywhere from 2GB to 50GB, depending on the source).Transcode the content. There is no single correct choice here. Remux the Content One of the easiest ways to remux your content is to use the MakeMKV application. Related Page: MakeMKV WebsiteRelated Page: Quick GuideRelated Page: MakeMKV FAQ Transcode the Content Handbrake There are lots of applications available to convert and transcode content. You can also see the ffmpeg info below for additional suggestions that can be used. Don Melton's Transcode Script. Handbrake Alternatives? - Plex Forums.