Alignment Options: differences, why and when to use? (Page 1) — GParted — GParted forum. Allignment cylinder mib none. Partition Alignment - Thomas-Krenn-Wiki. ﻿Partition alignment is understood to mean the proper alignment of partitions to the reasonable boundaries of a data storage device (such as a hard disk, solid-state drive (SSD) or RAID volume). 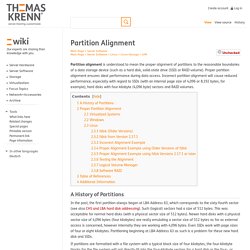 Proper partition alignment ensures ideal performance during data access. Incorrect partition alignment will cause reduced performance, especially with regard to SSDs (with an internal page size of 4,096 or 8,192 bytes, for example), hard disks with four-kilobyte (4,096 byte) sectors and RAID volumes. A History of Partitions In the past, the first partition always began at LBA Address 63, which corresponds to the sixty-fourth sector (see also CHS and LBA hard disk addressing). Such (logical) sectors had a size of 512 bytes. GPT fdisk Tutorial. By Rod Smith, rodsmith@rodsbooks.com Last Web page update: 7/27/2017, referencing GPT fdisk version 1.0.3 This Web page, and the associated software, is provided free of charge and with no annoying outside ads; however, I did take time to prepare it, and Web hosting does cost money. 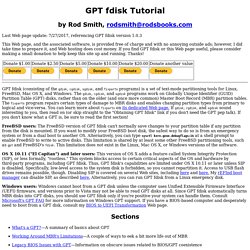 If you find GPT fdisk or this Web page useful, please consider making a small donation to help keep this site up and running. Thanks! GPT fdisk (consisting of the gdisk, cgdisk, sgdisk, and fixparts programs) is a set of text-mode partitioning tools for Linux, FreeBSD, Mac OS X, and Windows. FreeBSD users: The FreeBSD version of GPT fdisk can't normally save changes to your partition table if any partition from the disk is mounted. OS X 10.11 ("El Capitan") and later users: This version of OS X adds a feature called System Integrity Protection (SIP), or less formally, "rootless. 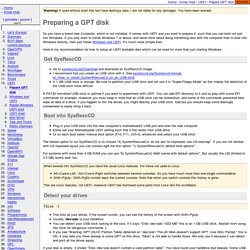 If used without brain this text here destroys data. I am not liable for any damages. You have been warned. So you have a brand new Computer, which is not installed. It comes with UEFI and you want to prepare it, such that you can boot not just into Windows. Get SysRescCD Go to sysresccd.org/Download and download an SysRescCD image. Boot into SysRescCD Plug in your USB stick into the new computer's motherboard's USB port and start the new computer.

When booted into SysRescCD you have the usual Linux features. Detect your drives. Aligning SSD Partitions. Do you have a brand new SSD? 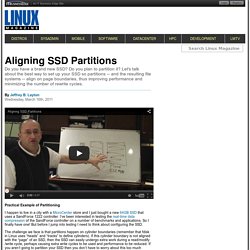 Do you plan to partition it? Let's talk about the best way to set up your SSD so partitions -- and the resulting file systems -- align on page boundaries, thus improving performance and minimizing the number of rewrite cycles. Practical Example of Partitioning I happen to live in a city with a MicroCenter store and I just bought a new 64GB SSD that uses a SandForce 1222 controller. I’ve been interested in testing the real-time data compression of the SandForce controller on a number of benchmarks and applications. Linux SSD partition alignment tips. Yes, this is another post on the internet about properly aligning your SSD partitions on Linux. 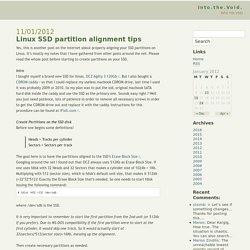 It’s mostly my notes that I have gathered from other posts around the net. Please read the whole post before starting to create partitions on your SSD. Intro I bought myself a brand new SSD for Xmas, OCZ Agilty 3 120Gb. But I also bought a CDROM caddy so that I could replace my useless macbook CDROM drive, last time I used it was probably 2009 or 2010. So my plan was to put the old, original macbook SATA hard disk inside the caddy and use the SSD as the primary one. SSD Tweaks in Linux and Aligning Partitions. December 21, 2010 I was recently given a shiny new ThinkPad T510 at work with nearly identical specs to my MacBook Pro, including a solid state drive (SSD). 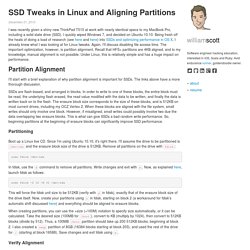 I quickly wiped Windows 7, and decided on Ubuntu 10.10. Being fresh off the heals of doing a load of research (see here and here) into SSDs and optimizing performance in OS X, I already knew what I was looking at for Linux tweaks. Again, I'll discuss disabling file access time. The important optimization, however, is partition alignment. Using the New GUID Partition Table in Linux (Goodbye Ancient MBR) In How to Upgrade Your Linux PC Hardware we learned about choosing Linux-compatible components, and some great Linux commands for probing hardware without opening the box. 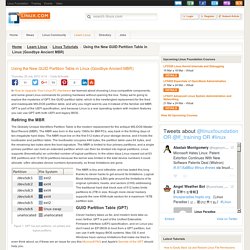 Today we're going to explore the mysteries of GPT, the GUID partition table, which is the newfangled replacement for the tired and inadequate MS-DOS partition table, and why you might want to use it instead of the familiar old MBR. GPT is part of the UEFI specification, and because Linux is a real operating system with modern features you can use GPT with both UEFI and legacy BIOS.

Retiring the MBR The Globally Unique Identifiers Partition Table is the modern replacement for the antique MS-DOS Master Boot Record (MBR). The MBR was born in the early 1980s for IBM PCs, way back in the thrilling days of ten-megabyte hard disks. Untitled. These are the steps I followed to install Arch Linux on my SSD. 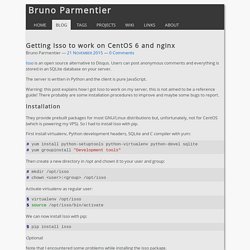 There are two partitions: /dev/sda1 for /boot and /dev/sda2 for the rest of the system. The last one is encrypted with dm-crypt and formatted in Btrfs. The first one stays unencrypted as it is needed by the BIOS to boot the system (although it seems possible to have it encrypted too, but I didn't try). Hyperlink. Prepare SSD for Linux Ubuntu.