Superior replacement for standard Quick Launch. XWidget and XLaunchpad Homepage - Powerful Widget Engine with visual widget editor. Cairo - Windows Shell Alternative - Home. Emerge Desktop. Dark Glass TNG The goal of this Theme was to highlight as many Emerge Desktop features as possible without overloading the screen: all current applets are included, there is some transparency in the applets and menus, there is a mouse over effect, and the top icon on the bottom emergeLauncher launches a second instance containing a Live Folder with the user’s Quick Launch items. 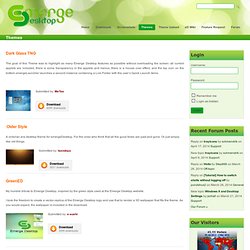 Submitted by: MeToo Older Style A victorian era desktop theme for emergeDesktop. For the ones who think that all the good times are past and gone. Emerge Desktop. Emerge Desktop. Applets[edit] Most of the Emerge Desktop applets are capable of being run as both standalone as well as being integrated, however the core applet (emergeCore) must be running in order for each applet to communicate with another in the suite. 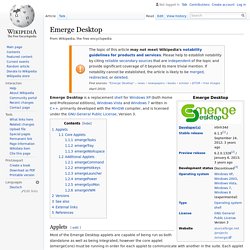 Each applet is aimed at replacing or extending a functionality of the default Windows shell and offers various configuration and visual customization features. Core Applets[edit] StandaloneStack » Chris'n'Soft. ObjectDock: Software from Stardock Corporation. WinCustomize Personalize your dock with downloadable skins. 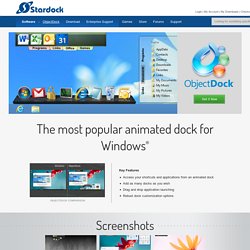 LiteStep. LiteStep is a Windows Shell replacement for Windows 9x and up, licensed under the terms of the GNU General Public License (GPL). 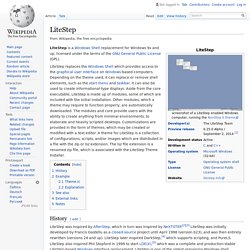 LiteStep replaces the Windows Shell which provides access to the graphical user interface on Windows-based computers. Depending on the theme used, it can replace or remove shell elements, such as the start menu and taskbar. It can also be used to create informational-type displays. Aside from the core executable, LiteStep is made up of modules, some of which are included with the initial installation. Other modules, which a theme may require to function properly, are automatically downloaded. History[edit] Example[edit] Theme.rc[edit] No Start Orb for Win7 by Mr-Ragnarok on DeviantArt. Removes the Windows Start Button.

ATTENTION INFO. Tweaker. After years of development, I decided to release an all-in-one application which will include most options available in my free Winaero apps and extend it as much as possible. 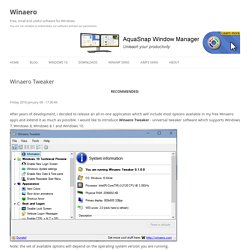 I would like to introduce Winaero Tweaker - universal tweaker software which supports Windows 7, Windows 8, Windows 8.1 and Windows 10. Note: the set of available options will depend on the operating system version you are running. Version 0.5.0.4 is released, see the change log below. Follow. Windows 10 - get smaller window titlebar and reduce window buttons. Many users are not happy with the default appearance of window title bars in Windows 10. 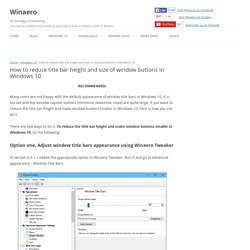 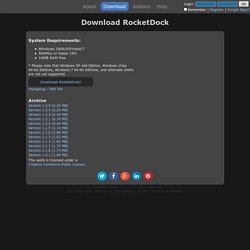 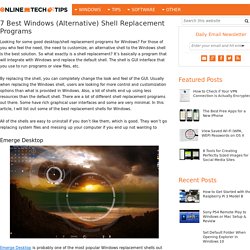 For those of you who feel the need, the need to customize, an alternative shell to the Windows shell is the best solution. So what exactly is a shell replacement? It’s basically a program that will integrate with Windows and replace the default shell. The shell is GUI interface that you use to run programs or view files, etc. By replacing the shell, you can completely change the look and feel of the GUI. All of the shells are easy to uninstall if you don’t like them, which is good. Five free application launchers to make a better Windows desktop - TechRepublic. I cannot tell you how many desktops I see during the day awash in icons. 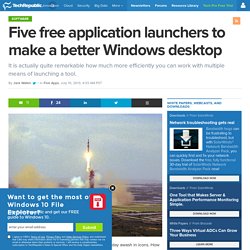 How end users manage to get anything done is amazing. When I have to work on one of those desktops, I wind up having to scan through the multitude of icons to get anything done. For those clients, I tend to recommend third-party launchers - at least to get their application shortcuts set in such a way that the software they need to use can be quickly launched - or at least better organized. This blog post is also available as a TechRepublic Screenshot Gallery. Though many may scoff at the idea of adding launchers to the Windows 7 desktop - it's actually quite remarkable how much more efficiently you can work with multiple means of launching a tool. Five Apps 1. The Best Application Launchers and Docks for Organizing Your Desktop. Is your desktop so cluttered you can’t find anything? 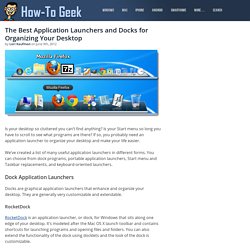