Beginner's guide to Tasker, part 0: How to go about learning Tasker. Pocketables has turned into a major hub for Tasker content over the last year, and there are currently more than a hundred Tasker articles on the site, including a huge beginner’s guide. 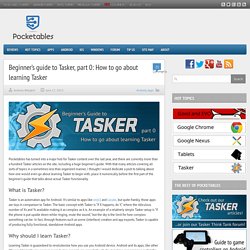 With that many articles covering all sorts of topics in a sometimes less than organized manner, I thought I would dedicate a post to talking about how one would even go about learning Tasker to begin with, place it numerically before the first part of the beginner’s guide that talks about actual Tasker functionality. What is Tasker? Tasker is an automation app for Android. It’s similar to apps like on{x} and Locale, but quite frankly, those apps are toys in comparison to Tasker. The basic concept with Tasker is “if X happens, do Y,” where the ridiculous number of Xs and Ys available making it as complex as it is. Why should I learn Tasker? Learning Tasker is guaranteed to revolutionize how you use you Android device. How long will it take me to learn Tasker?

That depends on what your goal is. I need help! Beginner's guide to Tasker, part 1: Tasker basics. Update: This is the original first part of the beginner’s guide, and it covers Tasker from the viewpoint of the now old UI that’s only used on pre-ICS Android devices. 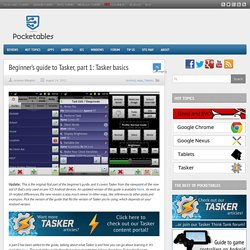 An updated version of this guide is available here. As well as UI-related differences, the new version is also much newer in other ways, like references to other posts and examples. Pick the version of the guide that fits the version of Tasker you’re using, which depends on your Android version. A part 0 has been added to the guide, talking about what Tasker is and how you can go about learning it. It’s available here. Beginner's guide to Tasker, part 1.5: Tasker basics (New UI) Back in 2012, I wrote a beginner’s guide to Tasker that currently consists of 7 parts. 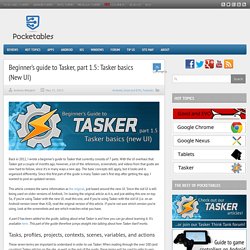 With the UI overhaul that Tasker got a couple of months ago, however, a lot of the references, screenshots, and videos from that guide are now hard to follow, since it’s in many ways a new app. The basic concepts still apply, but it looks and is organized differently. Since this first part of the guide is many Tasker user’s first stop after getting the app, I wanted to post an updated version.

This article contains the same information as the original, just based around the new UI. Since the old UI is still being used on older versions of Android, I’m leaving the original article as it is, and just adding this one on top. Beginner's guide to Tasker, part 2: Variables. In the first part of this guide I covered the basics of Tasker, and mentioned that I would go more into variables and scenes later on. 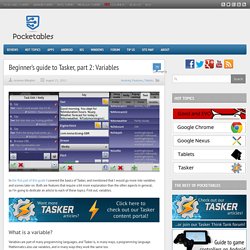 Both are features that require a bit more explanation than the other aspects in general, so I’m going to dedicate an article to each of these topics. First out, variables. What is a variable? Variables are part of many programming languages, and Tasker is, in many ways, a programming language. Mathematics also use variables, and in many ways they work the same too. A variable is essentially a virtual text file. When a variable is used anywhere in Tasker, Tasker will replace the variable with whatever the value (content) of the variable is when it executes whatever the variable is used in. Why use variables? The purpose of variables is to have a way to store information in a dynamic way. To fully understand the purpose of using variables, you first need to know about the different ways that you can change the value (contents) of a variable.

Exceptions. Beginner's guide to Tasker, part 3: Scenes. In the first part of this guide, I covered Tasker basics, and in the second part, variables. 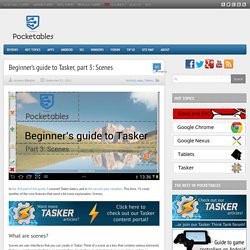 This time, I’ll cover another of the core features that need a bit more explanation: Scenes. What are scenes? Scenes are user interfaces that you can create in Tasker. Beginner's guide to Tasker, part 4: Variable data processing. With the basics, variables (in general), and scenes now all covered, it’s time to dig into something a bit more specific: Processing data using Tasker variables. 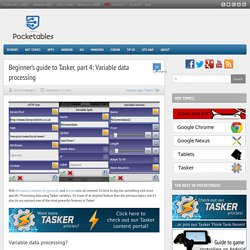 It’s more of an implied feature than the previous topics, but it’s also (in my opinion) one of the most powerful features in Tasker. Variable data processing? I’m kinda making up terms here, but it’s as good a term for this aspect of Tasker as anything. By variable data processing, I’m referring to how you can work with data stored in variables, extracting information from it, creating your own contexts, and so on and so forth. I have multiple profiles and tasks that use this in my Tasker, and some of them have been posted on this site before. Data sources To really understand the power of variable data processing you first have to realize how many potential data sources there are out there. It’s also important to understand the difference between what you see and what a computer sees. Reading data into variables HTTP Get Action 3: Beginner's guide to Tasker, part 5: Tips & tricks. The previous four parts of this guide have been thorough, but this is Tasker – thorough only covers a small corner. 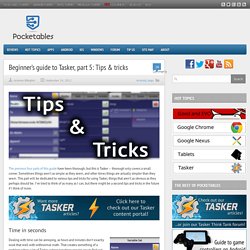 Sometimes things aren’t as simple as they seem, and other times things are actually simpler than they seem. This part will be dedicated to various tips and tricks for using Tasker, things that aren’t as obvious as they perhaps should be. I’ve tried to think of as many as I can, but there might be a second tips and tricks in the future if I think of more. Time in seconds Dealing with time can be annoying, as hours and minutes don’t exactly work that well with withnormal math. The solution is to use the smallest measurement of time we use normally: Seconds. Beginner's guide to Tasker, part 6: AutoRemote. The previous 5 parts have showed how much there is to know about Tasker itself, but that’s only half the story. 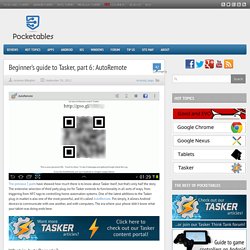 The extensive selection of third party plug-ins for Tasker extends its functionality in all sorts of ways, from triggering from NFC tags to controlling home automation systems. One of the latest additions to the Tasker plug-in market is also one of the most powerful, and it’s called AutoRemote. Put simply, it allows Android devices to communicate with one another, and with computers. The era where your phone didn’t know what your tablet was doing ends here. What is AutoRemote? Mobile devices can communicate with one another, but in ways designed with the user in mind. It does, however, not do so entirely on its own. Getting started with AutoRemote AutoRemote can be had from Google Play for $1. 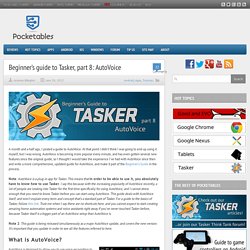 At that point I didn’t think I was going to end up using it myself, but I was wrong. AutoVoice is becoming more popular every minute, and has even gotten several new features since the original guide, so I thought I would take the experience I’ve had with AutoVoice since then and write a more comprehensive, updated guide for AutoVoice, and make it part of the Beginner’s Guide in the process. Note: AutoVoice is a plug-in app for Tasker. This means that in order to be able to use it, you absolutely have to know how to use Tasker. I say this because with the increasing popularity of AutoVoice recently, a lot of people are looking into Tasker for the first time specifically for using AutoVoice, and I cannot stress enough that you need to know Tasker before you can start using AutoVoice.

Note 2: This guide is being released simultaneously as a major AutoVoice update, and covers the new version. What is AutoVoice? Download: Google Play.