Compass. GPS. AndroCopter - use your smartphone as an autopilot ! Hi all, I would like to present my latest project, a scratch-built quadcopter with a special autopilot: an Android smartphone ! 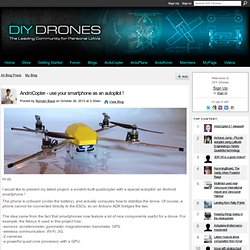 The phone is onboard (under the battery), and actually computes how to stabilize the drone. Of course, a phone cannot be connected directly to the ESCs, so an Arduino ADK bridges the two. The idea came from the fact that smartphones now feature a lot of nice components useful for a drone. For example, the Nexus 4 used in this project has: -sensors: accelerometer, gyrometer, magnetometer, barometer, GPS. For the moment, I can fly it manually from a laptop, with a XBox gamepad. All the source code can be found on Google Code, in case someone is interested. I would love feedback! Ardupilot goes into the water Part 9. Yes i know! 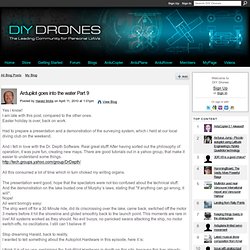 I am late with this post, compared to the other ones. Easter holiday is over, back on work. Had to prepare a presentation and a demonstration of the surveying system, which i held at our local diving club on the weekend. And i felt in love with the Dr. Depth Software. All this consumed a lot of time which in turn choked my writing organs. The presentation went good, hope that the spectators were not too confused about the technical stuff. And the demonstration on the lake busted one of Murphy´s laws, stating that "If anything can go wrong, it will".

Nope! All went boringly easy: The ship went off for a 30 Minute ride, did its criscrossing over the lake, came back, switched off the motor 3 meters before it hit the shoreline and glided smoothly back to the launch point. Stop dreaming Harald, back to reality. I wanted to tell something about the Autopilot Hardware in this episode, here it is: 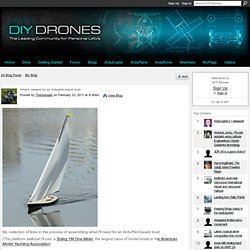 Powerboat with Arduino. Auto Pilot for Tiny Yacht. You are misunderstanding what the GPS actually does. 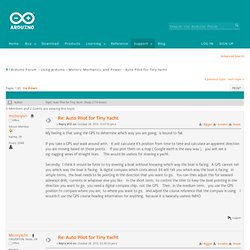 The GPS device does not know which way you are holding it ( unless it also has some kind of compass device inside it, some do. A GPS device inherently calculated its position. Thats all. It estimates its position roughly once a second, with an uncertainly of 2 or 3 metres. Any estimate of the direction in which you are going, is based on the difference between successive position estimates, and GPS does this quite poorly. Here's why. But if you are walking down the street at normal speed, or in a very small boat, the successive position estimates are closer together than the uncertainty of each estimate. Arduino Autopilot. Thanks for the info Coding Badly. 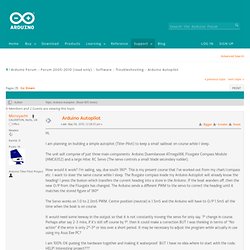 In the past I've used Basic stamps BS-1 and BS-2 for steer searchlight beams around the sky. I just used the controllers to output step pulses (PULSEOUT) and used external drivers connected to larger stepper motors. I wrote sequences for the beams to move across the sky and also manual Joystick control. A LONG time ago! GPS Guided Trans-Atlantic Robot Boat. Home . 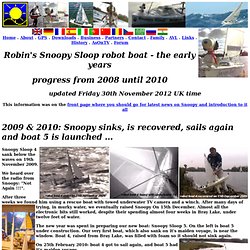 About . GPS . Downloads . Business . Partners . This information was on the front page where you should go for latest news on Snoopy and introduction to it all Snoopy Sloop 4 sank below the waves on 19th November 2009. We heard over the radio from Snoopy: "Not Again !!! ". After three weeks we found him using a rescue boat with towed underwater TV camera and a winch. Almost all the electronic bits still worked, despite their spending almost four weeks in Bray Lake, under twelve feet of water. The new year was spent in preparing our new boat: Snoopy Sloop 5. On 25th February 2010: boat 4 got to sail again, and boat 5 had it's maiden voyage.

Boat 5 uses the same sails as boat 4 which is a standard IOM class model (International One Metre). Boat 5 is longer, at 5 feet (1.52 metres) and has a double keel. Here is the much heavier, Snoopy Sloop 3, originally intended to be Robin's first boat capable of going to sea. Sailboat Autopilot Design for ArduPilotMega. We just finished up modeling sailboat dynamics and implemented a controller. 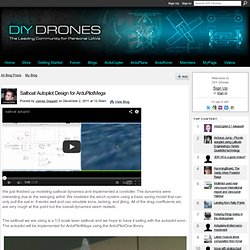 The dynamics were interesting due to the swinging airfoil. We modeled the winch system using a basic spring model that can only pull the sail in. It works well and can simulate irons, tacking, and jibing.