Eqentia Content Curation, Monitoring, Aggregation and Re-publishing for the Enterprise. Paper.li. Summary of Your Social News Feeds - Summify. Storify · Make the web tell a story. Home - Bag The Web. Keepstream - Organize your tweets with curation. Create stories from Tweets. - Chirpstory. Has Been Acquired By Infochimps! / Keepstream. By – September 7, 2011 Posted in: Company News. 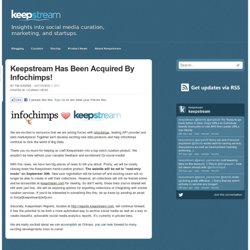 Redux. Told Through The Photos Of Regular New Yorkers. They Don't Call It The News Feed For Nothing: 1-In-3 Americans Use Facebook As A News Source. Whether they mean to or not, nearly one out of every three Americans (30%) receive their news via the Facebook News Feed according to a new study by Pew Research Center. 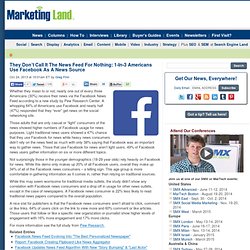 A whopping 64% of Americans use Facebook and nearly half (47%) responded that they “ever” get news on the social networking site. Those adults that are only casual or “light” consumers of the news showed higher numbers of Facebook usage for news purposes. Light traditional news users showed a 47% chance that they use Facebook for news while heavy news consumers didn’t rely on the news feed as much with only 38% saying that Facebook was an important way to gather news. Those that use Facebook for news aren’t light users. 49% of Facebook news users gather information on six or more different topics.

Not surprisingly those in the younger demographics (18-29 year olds) rely heavily on Facebook for news. $5,000 gets you an eHarmony counselor to manage your dating profile - Quartz. Online dating site eHarmony.com announced a new service that might seem counterintuitive for an online dating site: human matchmaking. 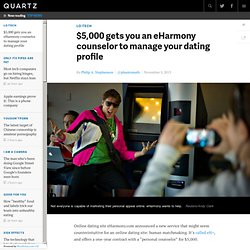 It’s called eH+, and offers a one-year contract with a “personal counselor” for $5,000. Among online dating sites, this move seems unexpected from eHarmony, best known for its elaborate computerized enrollment process. Athletes On Instagram Posting Outrageous Pictures. The Wirecutter. Excerpt of David Shoemaker's new book, a concise history of racism in wrestling. The following is an excerpt from David “The Masked Man” Shoemaker’s new book, The Squared Circle: Life, Death, and Professional Wrestling. 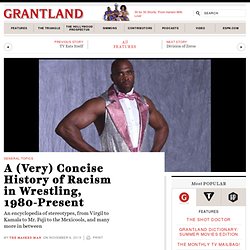 It has been slightly modified for this publication. If you tuned in to the WWF on Saturday morning in the late ’80s, or watched an episode of Hulk Hogan’s Rock ‘n’ Wrestling, it was hard not to notice the cultural and ethnic diversity the cast of brawlers represented. But despite the diversity, the characters’ vocabulary wasn’t exactly progressive. Though his English was faltering, Mr. Liu Bolin: The Invisible Man - In Focus. Chinese artist Liu Bolin has been disappearing for years now. 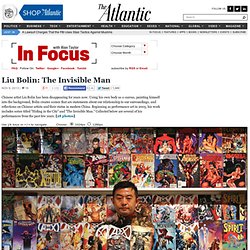 Using his own body as a canvas, painting himself into the background, Bolin creates scenes that are statements about our relationship to our surroundings, and reflections on Chinese artists and their status in modern China. Beginning as performance art in 2005, his work includes series titled "Hiding in the City" and "The Invisible Man. " Collected below are several of his performances from the past few years. [28 photos]

Exclusive: The American Who Designed the PlayStation 4 and Remade Sony. Yoshida and his team did produce a game for the keynote, frantically rejiggering a flight combat title they were developing called Warhawk. 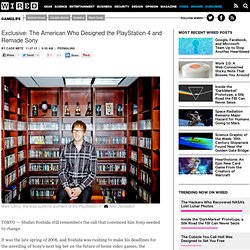 But, not too surprisingly, the demo was a complete mess — and a sign of things to come. The PS3 launched with only 12 game titles, and most didn’t take full advantage of its Cell microprocessor, a complicated if high-powered component that, much like the controller, was designed without much input from anyone outside a small team of hardware engineers. In the months to come, other developers were slow to embrace the PS3 as well, and this problem, coupled with the PS3′s hefty $600 price tag, made for a rocky start for the new machine. When the PS3 launched, according to most estimates, Sony controlled about 70 percent of the console market. Seven years later, it’s on even terms with Microsoft, whose Xbox 360 outsold the PS3 in the U.S. for 32 consecutive months.

WHITE JAPANESE PEOPLE - 白人系日本人. We Love Japan Ramen Girls 円安だ！ラーメンだ、外国人なでしこが喜ぶとてつもない日本観光. Proper Japanese Etiquette for Jogging Around the Imperial Palace. Since many persons, such as not only a runner but a pedestrian, a bicycle, a tourist, are in the circumference of the Imperial Palace, a runner’s manners become very important. 10 Things the Japanese National Tourist Association of Chiyoda City Wants You to Know Stay on the left side – Note that cars are driven on the left side of the road in Japan, so…No passing your fellow runner – When the path becomes narrow run in lineRun counterclockwise to fit in- That what it’s made for. 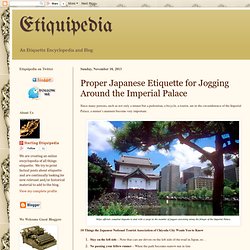 Everyone is doing it so you should too.Pace yourself during rush hour – Run with ease at the time of rush hours not worry about time.Call it when overtaking the person in front of you – "Coming through! " About #5: How to call out Hidarigawa Wo Torimasu. Mircroblogging. Twitter. Places your tweets get posted if you tweet about. Gospeli.ca: May all your tweets be answered! Tweet church. Dear god, good morning! It's been a while since I went to church... Martinnicholso2 - Gospeli.ca: May all your tweets be answered! No results as of 131113. Tumblr. Slism.com - Tumblr.