Seven-Figure Mega Fortune Jackpot Awarded at PAF Casino. If you're the type of player who loves to get in on the action with online slots, then chances are that you're familiar with the massive progressive jackpots that can be won on some of these games. 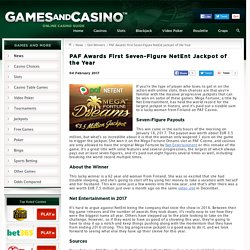 Mega Fortune, a title by Net Entertainment, has held the world record for the largest jackpot in history, and it's paid out a sizable sum to a lucky woman from Finland on PAF Casino. Seven-Figure Payouts This win came in the early hours of the morning on January 18, 2017. The payout was worth about EUR 3.5 million, but what's so incredible about it is that the woman only wagered 1 euro on the game to trigger the jackpot. She won it on the Mega Fortune Dreams slot at PAF Casino, and casinos are only allowed to have the original Mega Fortune by Net Entertainment or this remake of the game. 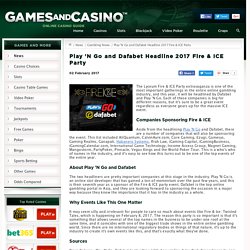 Each of these companies is big for different reasons, but it's sure to be a great event regardless as everyone gears up for the massive ICE event. Companies Sponsoring Fire & ICE Aside from the headlining Play 'N Go and Dafabet, there are a number of companies that will also be sponsoring the event. This list included AliQuantum, CalvinAyre.com, Core Gaming, Ezugi, Gamesys, Gaming Realms, Ganapati, Habanero Systems, Ifrah Law, iGaming Capital, iGamingBusiness, iGamingCalendar.com, International Game Technology, Income Access Group, Magnet Gaming, Mangostorm, PartyPoker, Pinnacle, Vegas Kings and the World Poker Tour. Jeff Sessions Could Revisit 2011 Wire Act in United States. One of the most important pieces of legalese that has come down in the United States for online gambling in the United States was a 2011 opinion about the Wire Act of 1961. 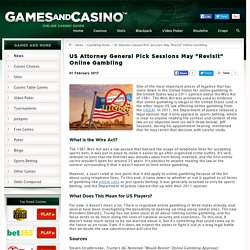 The Wire Act was previously used as evidence that online gambling is illegal in the United States (and is the other major US law affecting online gambling from the UIGEA). In 2011, the Department of Justice released a legal opinion that it only applied to sports betting, which is clear to anyone reading the context and content of the law on an objective level (as we'll show below).

Jeff Sessions, during his appointment hearing, mentioned that he may revisit that decision with careful study. What is the Wire Act? Max Bet Shield Feature Started by FreakyVegas. One of the things that is a problem for a lot of players is trying not to break the terms and conditions for bonuses. 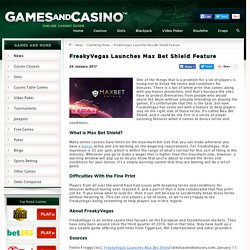 There is a ton of white print that comes along with any bonus promotion, and that's because the sites have to protect themselves from people who would abuse the deals without actually intending on playing the games. It's unfortunate that this is the case, but now FreakyVegas has come out with a feature to help players stay on the right side of these terms. It's called Max Bet Shield, and it could be the first in a series of player-assisting features when it comes to bonus terms and conditions. What is Max Bet Shield? Many online casinos have limits on the maximum bet size that you can make whenever you have a bonus active and are working on the wagering requirements.

Cafe Casino Awards Seven Figures on a Table Game. Table games are not the first thing that come to mind for people when they hear that someone picked up a big jackpot online. 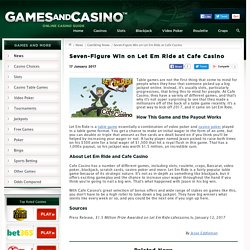 Instead, it's usually slots, particularly progressives, that bring this to mind for people. At Cafe Casino, they have a variety of different games, and that's why it's not super surprising to see that they made a millionaire off of the back of a table game recently. It's a great way to kick off 2017, and it came on Let Em Ride. How This Game and the Payout Works Let Em Ride is a table game essentially a combination of video poker and casino poker played in a table game format. Virtual Reality Casinos and their future in iGaming. If you go back a couple of years, Microgaming was the first company to present a virtual reality casino game that included current technology. 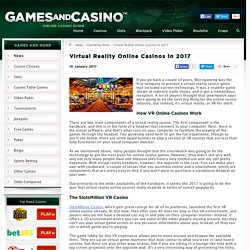 It was a roulette game shown at industry trade shows, and it got a tremendous reception. A lot of players thought that smartwatch apps were going to be the next big thing for the online casino industry, but instead, it's virtual reality, or VR for short. $15,000 Up For Grabs at Bingo Billy in Jackpot Party. Bingo Billy is looking to help players start off the year on the right foot, and they're doing this with a big game this weekend. 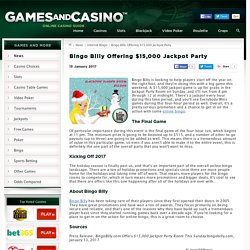 A $15,000 jackpot game is up for grabs in the Jackpot Party Room on Sunday, and it'll run from 8 pm through 12 at midnight. There's a jackpot every hour during this time period, and you'll see Everybody Wins games during this four-hour period as well. Overall, it's a pretty serious promotion and a chance to get in on the action with some online bingo.