Smart Mirror by evancohen. Evancohen/smart-mirror: The fairest of them all. Temp sensor connected to ESP8266 and upload data using MQTT. Intro: The ESP8266 is a great inexpensive device that gives you WIFI connectivity as well as a couple GPIO ports to connect sensors. 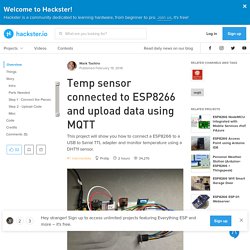 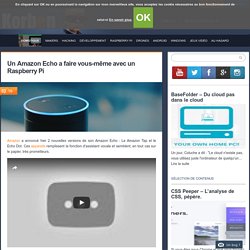 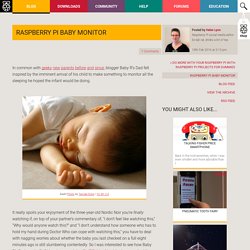 It really spoils your enjoyment of the three-year-old Nordic Noir you’re finally watching if, on top of your partner’s commentary of, “I don’t feel like watching this,” “Why would anyone watch this?” And “I don’t understand how someone who has to hold my hand during Doctor Who can cope with watching this,” you have to deal with nagging worries about whether the baby you last checked on a full eight minutes ago is still slumbering contentedly. So I was interested to see how Baby R’s Dad, one half of blogging parent duo Stuff Babies Need, had approached the problem. Building a Raspberry Pi Baby Monitor - Stuff Babies Need. As an expectant Dad, I was searching for helpful things to do in preparation for the arrival of our little one. 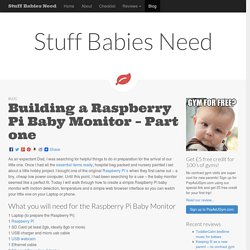 Once I had all the essential items ready, hospital bag packed and nursery painted I set about a little hobby project. I bought one of the original Raspberry Pi’s when they first came out – a tiny, cheap low power computer. Until this point, I had been searching for a use – the baby monitor seemed like a perfect fit. Raspberry Pi Zero/Super Nintendo Cart Mod. Voice Controlled Drone with Amazon Echo and 3DR IRIS+ Voice Controlled Quadcopter Drone With Amazon Echo, AWS IoT, and 3DR IRIS+ Disclaimer Drones or Unmanned Aerial Vehicles (UAVs) are inherently dangerous. 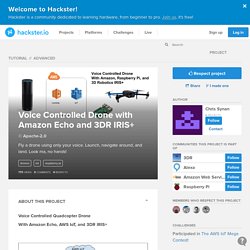 People could get hurt and property could be damaged. Follow these instructions AT YOUR OWN RISK. WaterPi: Houseplant Remote Watering and Monitoring System. Introduction The system is a suitable solution for people who love and want to look after plants in their house but very busy in daily jobs to do that. 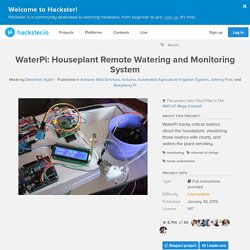 Growing plants requires time and effort in order to be successful because there are some regular things to do like watering them every day. People sometimes forget to take care of their plants. Also, some people travel a lot and spend less time in their house. In this context, they generally ask for help to look after their houseplants otherwise they simply give up to have them. The system monitors temperature and humidity of the place, and soil moisture of the ground, waters the plant remotely, then saves all data to DynamoDB through AWS IoT. Nobody Parks Here! Why? 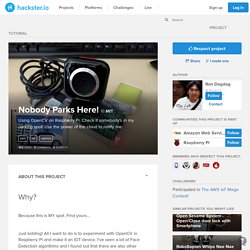 Because this is MY spot. Find yours... Just kidding! All I want to do is to experiment with OpenCV in Raspberry Pi and make it an IOT device. I've seen a lot of Face Detection algorithms and I found out that there are also other experiments. Traffic Flow is the study of interactions between vehicles, drivers, pedestrians, cyclists, other travelers and infrastructure (including highways, signage, and traffic control devices), with the aim of understanding and developing an optimal road network with efficient movement of trafficand minimal traffic congestion problems. RFID Register. Network Monitoring with AWS IoT.

Background Network hacking and attack happens every seconds in the world and the loss and impact can be very large, but not everyone has good knowledge, time and expensive equipment to keep tracking their network health. 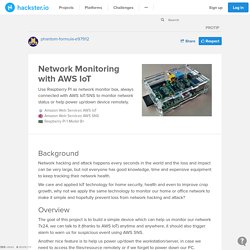 We care and applied IoT technology for home security, health and even to improve crop growth, why not we apply the same technology to monitor our home or office network to make it simple and hopefully prevent loss from network hacking and attack? Overview The goal of this project is to build a simple device which can help us monitor our network 7x24, we can talk to it (thanks to AWS IoT) anytime and anywhere, it should also trigger alarm to warn us for suspicious event using AWS SNS. Another nice feature is to help us power up/down the workstation/server, in case we need to access the files/resource remotely or if we forget to power down our PC.

Features. Outernet. Restful Weather. I got a bunch of shiny new toys for Christmas and needed a project to play with. 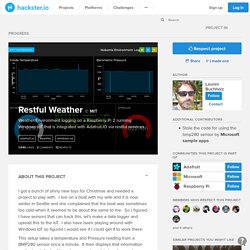 I live on a boat with my wife and it is now winter in Seattle and she complained that the boat was sometimes too cold when it seemed to be about the same to me. So I figured I have sensors that can track this, let's make a data logger and upload this to the IoT. I also have been playing around with Windows IoT so figured I would see if I could get it to work there. This setup takes a temperature and Pressure reading from a BMP280 sensor once a minute. 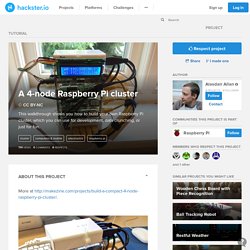 I used three Raspberry Pi 2 boards for compute nodes and an original Model B for the head node. I wanted the cluster — more commonly known as a ‘bramble’ — to be as compact as possible, with just two cables coming out, one for power and the other for network. Pi Player. Ever wanted your Raspberry Pi to act as a network-controlled audio player? Pi Player accomplishes this goal. It consists of 3 components acting independently to make the system work. Desktop app - Used for discovering the Raspberry Pi and as an example of basic network TCP and UDP commands.

Web app - A responsive web UI to control the Raspberry Pi audio through phones and web browsers. This is an easier alternative than building a from-scratch mobile app for every platform. Interfacing Arduino with Raspberry Pi. Raspberry Pi is great tool for embedded engineers but it lacks ADC. One more draw back is all its IO’s are 3.3V level. On the other side Arduino is good at sensing the physical world using sensors. To get benefits of both the systems one may want to interface them. We can divide this interfacing problem into two steps. There are many interface options available in both boards like UART, IIC and SPI. Smart Home Mini Arduino - In 30 Minutes - posting in Ubidots. Smart Home Mini - Post in Ubidots A few days ago , I became interested more for IoT technology and its facilities and possibilities. Thinking about it and doing intensive research on the web, I found that there were no tutorials and simple designs, anyone with little or none experience with Arduino, API, JSON, WEB SERVER and a plurality of expertise could enjoy this feature ( IoT ).

This publication is simple to send variables sensors to clound ( Ubidots ) in a fast , direct and dynamic way. I will not describe in this tutorial step by step account setup , since the material of their own website is much better than what I could do. www.ubidots.com. Adding Bluetooth to Your Arduino (+Light Sensor) We are a group of hackers working on a project that allows you to communicate with your Arduino project using an Adafruit nRF8001 Bluetooth module. For another version of this guide, check out our blog at Step 1: Introduction Arduino is a cool platform because you can easily interact with your projects from your computer. But in 2015, adding the ability to control your project from your smartphone is necessary to creating a viable product. Temperature sensor. Temperature/humidity monitor with Dweet & Freeboard. **This project is similar to Temperature/humidity monitor with Blynk, however, I think using dweet and freeboard makes the dashboard far more accessible. none the less, credit goes to that author for inspiration and wiring.

I needed a quick and simple temp/humidity monitor for a baby's room. I grabbed some parts and put it together. Myva-Home (Voice controlled home automation) Myva-Home Voice controlled home automation system, with easy to use examples and libraries. All just using any android device and a Linkit Smart, which uses a command library that get sent back to the android, so no need to make a new app I already did that for you... Example Commands This is a prebuilt application to easily allow you to modify and experimentWith the appliances in your home, all running on a microprocessor (Linkit_Smart) How it works Android client (Prebuilt) The android client is all premade and as soon as you press the microphone and say a command, the app will grab that command and send it to the Linkit SMART to the Ip and Port specified.

Sunday, Jan. 03, 2016 - A piece of Raspberry Pi daily. #3DPrinted Daft Punk Helmet with Bluetooth #3DThursday #3DPrinting. December 31, 2015 AT 8:00 am #3DPrinted Daft Punk Helmet with Bluetooth #3DThursday #3DPrinting. Basic Temperature Logging To The Internet With Raspberry Pi. Seattle web developer creates voice-controlled smart mirror (Includes interview) Garage Commander. What's new There are plenty of garage door openers in the web these days and each one is special in its own way. Make a Mini Weather Station With a Raspberry Pi 2. Open Source Automation - Automation software for the home and more. CSEduino. Weather Station. Personal Mirror. The Personal Mirror. Long Range UHF RFID Item Tracking System. Maker spaces typically have hundreds of valuable tools available for use by their members. Security camera to make in Rpi2 and WebCam.