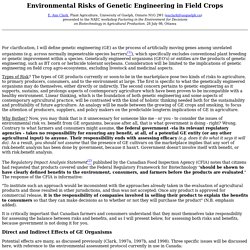 Ann Clark, Plant Agriculture, University of Guelph, Ontario N1G 2W1 (eaclark@uoguelph.ca) presented to the NAEC workshop Factoring in the Environment for Decisions on Biotechnology in Agricultural Production. 28 July 98, Ottawa For clarification, I will define genetic engineering (GE) as the process of artificially moving genes among unrelated organisms (e.g. across normally impenetrable species barriers(1)), which specifically excludes conventional plant breeding or genetic improvement within a species.

Genetically engineered organisms (GEO's) or entities are the products of genetic engineering, such as BT corn or herbicide tolerant soybeans. Consideration will be limited to the implications of genetic engineering on field crop agro-ecosystems, excluding livestock and medicinal aspects. Types of Risk? Why Bother? Direct and Indirect Effects of GE Organisms I. At least two reasons could be suggested in the affirmative: Safety Reserach: Genetically Modified Plants and the Environment.

Genetic Engineering. Genetic engineering (GE) is the modification of an organism’s genetic composition by artificial means, often involving the transfer of specific traits, or genes, from one organism into a plant or animal of an entirely different species. 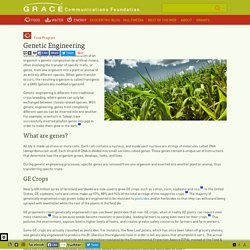 When gene transfer occurs, the resulting organism is called transgenic or a GMO (genetically modified organism). Genetic engineering is different from traditional cross breeding, where genes can only be exchanged between closely related species. With genetic engineering, genes from completely different species can be inserted into one another. For example, scientists in Taiwan have successfully inserted jellyfish genes into pigs in order to make them glow in the dark. What are genes? Ethical Issues in Genetic Engineering and Transgenics. Updated November 2013 Introduction Genetic engineering, or genetic modification, uses a variety of tools and techniques from biotechnology and bioengineering to modify an organism’s genetic makeup. 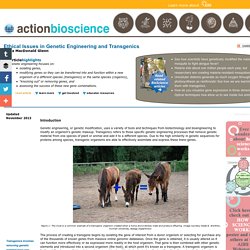 Transgenics refers to those specific genetic engineering processes that remove genetic material from one species of plant or animal and add it to a different species. Due to the high similarity in genetic sequences for proteins among species, transgenic organisms are able to effectively assimilate and express these trans-genes. Figure 1: The mule is a common example of a transgenic organism created when a horse and a donkey mate and produce offspring. Transgenics involves removing genetic material from one species and adding it to another. The process of creating a transgene begins by isolating the gene of interest from a donor organism or selecting for purchase any of the thousands of known genes from massive online genomic databases. Current Developments Ethical Issues Social Concerns Conclusion. What is Genetic Engineering? - Definition, Benefits & Issues. When most people think of genetics, they think of their own genes, but genetics is also very important in agriculture. 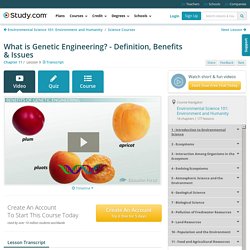 In this lesson, we will explore genetic engineering and how it relates to agriculture. We will also investigate the benefits and issues associated with genetic engineering. Explore our library of over 10,000 lessons Click "next lesson" whenever you finish a lesson and quiz. Got It You now have full access to our lessons and courses. You're 25% of the way through this course! Impact of Genetically Engineered Crops on Farm Sustainability in the United States. Beckie, H.J. 2006. 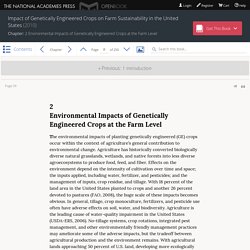 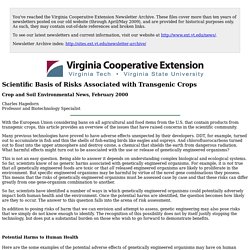 These files cover more than ten years of newsletters posted on our old website (through April/May 2009), and are provided for historical purposes only. As such, they may contain out-of-date references and broken links. To see our latest newsletters and current information, visit our website at Newsletter Archive index: Scientific Basis of Risks Associated with Transgenic Crops Crop and Soil Environmental News, February 2000 Charles Hagedorn Professor and Biotechnology Specialist With the European Union considering bans on all agricultural and food items from the U.S. that contain products from transgenic crops, this article provides an overview of the issues that have raised concerns in the scientific community.

Many previous technologies have proved to have adverse effects unexpected by their developers. This is not an easy question. Potential Harms to Human Health New Allergens in the Food Supply Antibiotic Resistance. Human, social, and environmental impacts of genetic engineering. Genetic Engineering Risks and Impacts. Any technology that offers benefits will usually come with risks as well. 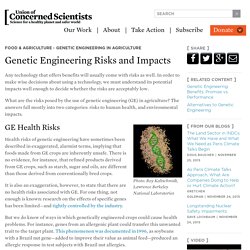 In order to make wise decisions about using a technology, we must understand its potential impacts well enough to decide whether the risks are acceptably low. What are the risks posed by the use of genetic engineering (GE) in agriculture? The answers fall mostly into two categories: risks to human health, and environmental impacts. Photo: Roy Kaltschmidt, Lawrence Berkeley National Laboratories GE Health Risks Health risks of genetic engineering have sometimes been described in exaggerated, alarmist terms, implying that foods made from GE crops are inherently unsafe.

It is also an exaggeration, however, to state that there are no health risks associated with GE. But we do know of ways in which genetically engineered crops could cause health problems. Unintended consequences like these underscore the need for effective regulation of GE products.