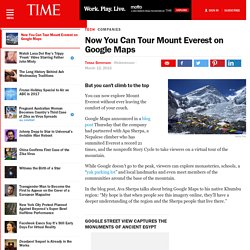 Google Maps announced in a blog post Thursday that the company had partnered with Apa Sherpa, a Nepalese climber who has summited Everest a record 21 times, and the nonprofit Story Cycle to take viewers on a virtual tour of the mountain. While Google doesn’t go to the peak, viewers can explore monasteries, schools, a “yak parking lot” and local landmarks and even meet members of the communities around the base of the mountain.

In the blog post, Ava Sherpa talks about bring Google Maps to his native Khumbu region: “My hope is that when people see this imagery online, they’ll have a deeper understanding of the region and the Sherpa people that live there.” Google Street View Captures the Monuments of Ancient Egypt Google. Mount Everest simulation - Interactive - CBC.ca. The route - climbers guide to Everest. Everest is our tallest mountain. 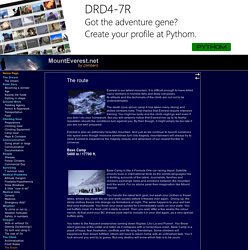 It is difficult enough to have killed many climbers in horrible falls and deep crevasses. Its altitude and the technicals of the climb are not not to be underestimated. The death zone above camp 4 has taken many strong and skilled climbers lives. That implies that Everest require intensive training. You might be lucky and the climb might go well even if you didn´t do your homework.

Everest is also an extremely beautiful mountain. Base Camp 5400 m / 17700 ft. Base Camp is like a Formula One car racing depot. You handle the latest tech gear, but wash your clothes in frozen lakes, where you crush the ice and work quickly before it freezes over again. You listen to the frequent avalanches coming down Nuptse, Lho La and Pumori.

Icefall 5500 m - 6100 m / 18000 ft - 20000 ft. This place is similar to a huge horror-chamber at an amusement park. Be sure to always clip in to the ropes. Mt Everest Southeast ridge climbing route in 3D. Mt. Everest South Col Route Maps. South Col to the Balcony click to enlarge map Summit route as seen from Camp 4, the South Col. 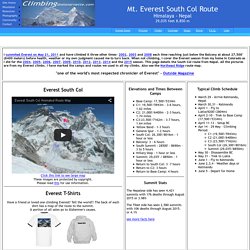 The true summit is not visible from this angle. It is about 1.07 miles from the South Col to the summit and usually takes from 6 to 9 hours or more. The summit bid starts before midnight with a steep climb up the South side of Everest. Narrative If the weather is good, there will be no wind and the temps around zero, very comfortable in down suits. As we got ready to leave for the summit, they checked our crampons for tightness, that our harnesses were doubled-backed and that our oxygen was set properly with the regulators.

It was obviously dark at 9:20 PM when we set out. We started up the Triangular Face towards the Balcony. The climb from the South Col is some of the steepest, sustained climbing on a South Col route climb until you reach the slabs discussed next. The climb through the Triangular Face to the Balcony is long and cold in the dark. Mount Everest Guided Climbing Expedition with Alpine Ascents International. Everest Maps & Facts Map of Nepal Climbing Route By the time we reach base camp, our climbing leaders and Sherpa will be well on the way to having the lower part of the mountain (the Khumbu Ice Fall) already fixed with ropes and ladders. 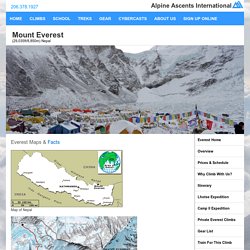 We will establish four camps on the mountain. The first, at 19,500ft, is situated at the top of the ice fall. This camp functions as an intermediate camp until Camp II (advanced base camp) is established at 21,000ft in the Western Cwm. Camp II will consist of large tents for cooking and dining and several smaller tents for sleeping. Most of our Sherpa are able to carry directly from Camp II to Camp IV, so large amounts of gear are not needed at Camp III to establish Camp IV. Legend of the Golden Chair The evil deities were gathered together plotting to take over the world. Facts Formal Name: Kingdom of Nepal Local Name: Nepala Local Formal Name: Sri Nepala Sarkar Visa Info: Passport and visa required for US Citizens. Country Links CIA World Factbook.