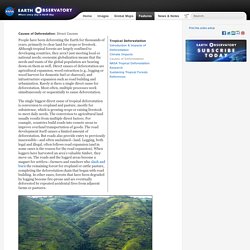 Rates of Tropical Deforestation Several international groups produce routine estimates of tropical deforestation, most notably the Food and Agriculture Organization (FAO) of the United Nations, which has been producing a global forest resources assessment every five to ten years since the late 1940s. Solutions to Deforestation - Greenpeace USA. The causes of deforestation and degradation vary from region to region. 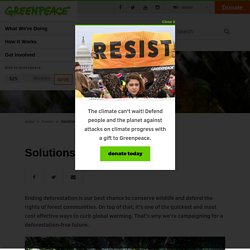 In the tropics, agribusiness clears forests to make space for things like cattle ranching, palm oil and soy plantations for animal feed. Demand for wood products can threaten forests around the world, whether it is for throw-away paper products or hardwood flooring. In too many parts of the world, ineffective or corrupt governments make things worse by opening the door to illegal logging and other crimes.

Deforestation. An estimated 13 million hectares of forests were lost each year between 2000 and 2010 due to deforestation. 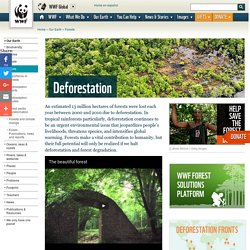 In tropical rainforests particularly, deforestation continues to be an urgent environmental issue that jeopardizes people’s livelihoods, threatens species, and intensifies global warming. Forests make a vital contribution to humanity, but their full potential will only be realized if we halt deforestation and forest degradation. Forests in our lives Forests impact our daily lives in more ways than we can imagine. From the air we breathe to the wood we love, human beings are heavily dependent on forests and the products and services they provide. Yet we are losing forests. Tropical forests: A clearing in the trees. Deforestation Facts, Deforestation Information, Effects of Deforestation. Modern-Day Plague Deforestation is clearing Earth's forests on a massive scale, often resulting in damage to the quality of the land. 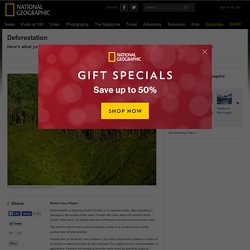 Forests still cover about 30 percent of the world’s land area, but swaths the size of Panama are lost each and every year. The world’s rain forests could completely vanish in a hundred years at the current rate of deforestation. Forests are cut down for many reasons, but most of them are related to money or to people’s need to provide for their families.The biggest driver of deforestation is agriculture. Farmers cut forests to provide more room for planting crops or grazing livestock. Logging operations, which provide the world’s wood and paper products, also cut countless trees each year. Not all deforestation is intentional. Deforestation has many negative effects on the environment. Deforestation also drives climate change.

Trees also play a critical role in absorbing the greenhouse gases that fuel global warming. Deforestation: Facts, Causes & Effects. Deforestation is the permanent destruction of forests in order to make the land available for other uses.

An estimated 18 million acres (7.3 million hectares) of forest, which is roughly the size of the country of Panama, are lost each year, according to the United Nations' Food and Agriculture Organization (FAO). Some other statistics: About half of the world's tropical forests have been cleared (FAO) Forests currently cover about 30 percent of the world’s land mass (National Geographic) Forest loss contributes between 6 percent and 12 percent of annual global carbon dioxide emissions (Nature Geoscience) About 36 football fields worth of trees lost every minute (World Wildlife Fund (WWF)) Deforestation occurs around the world, though tropical rainforests are particularly targeted. NASA predicts that if current deforestation levels proceed, the world's rainforests may be completely in as little as 100 years. Error loading player: No playable sources found Weather vs. Deforestation. "Here goes lumber from the Maine woods ... pine, spruce, cedar, - first, second, third, and fourth qualities, so lately all of one quality, to wave over the bear, and moose, and caribou... 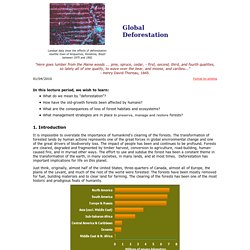 " - Henry David Thoreau, 1845. 1. Introduction It is impossible to overstate the importance of humankind's clearing of the forests. The transformation of forested lands by human actions represents one of the great forces in global environmental change and one of the great drivers of biodiversity loss. The impact of people has been and continues to be profound. Deforestation. Forests cover 31% of the land area on our planet. 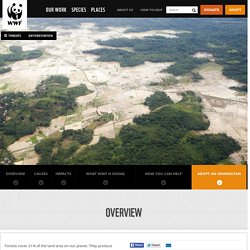 They produce vital oxygen and provide homes for people and wildlife.