Christian Persecution Under the Roman Empire

Why Did the Romans Persecute Christians? Thank you for your interest in Patheos newsletters! 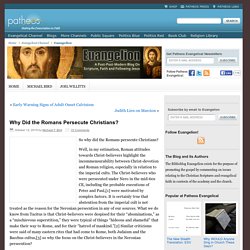 Please enter your email address below and click the "Subscribe" button. Thank you for your subscription. You can visit your Preference Center to complete your profile and see what else we have to offer. We apologize, we were unable to complete your subscription at this time, please try again later. History - Ancient History in depth: Christianity and the Roman Empire. Time Line of Early Christianity. Some accounts of Christian persecutions say that believers were thrown to wild animals in Roman amphitheaters—as depicted in this 19th century painting. 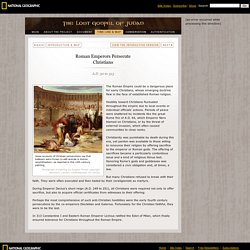 Photograph of painting by Eugene Thirion copyright Bonhams, London, UK/Bridgeman Art Library The Roman Empire could be a dangerous place for early Christians, whose emerging doctrine flew in the face of established Roman religion. Hostility toward Christians fluctuated throughout the empire due to local events or individual officials' actions. Periods of peace were shattered by incidents like the great Rome fire of A.D. 64, which Emperor Nero blamed on Christians, or by the threat of external invasion, which often caused communities to close ranks.

Christianity was punishable by death during this era, yet pardon was available to those willing to renounce their religion by offering sacrifice to the emperor or Roman gods. History of the Origins of Christianity. Book V. The Gospels. The monstrosities of the “bald Nero” made frightful progress. 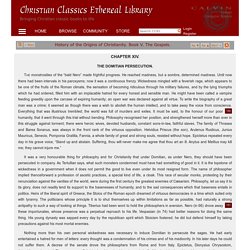 He reached madness, but a sombre, determined madness. Until now there had been intervals in his paroxysms; now it was a continuous frenzy. Wickedness mingled with a feverish rage, which appears to be one of the fruits of the Roman climate, the sensation of becoming ridiculous through his military failures, and by the lying triumphs which he had ordered, filled him with an implacable hatred for every honest and sensible man. He might have been called a vampire feeding greedily upon the carcase of expiring humanity; an open war was declared against all virtue. To write the biography of a great man was a crime; it seemed as though there was a wish to abolish the human intellect, and to take away the voice from conscience.

When Were the 10 Christian Persecutions? By N.S. 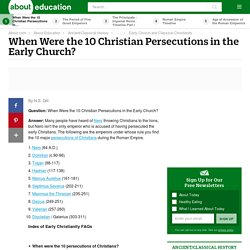 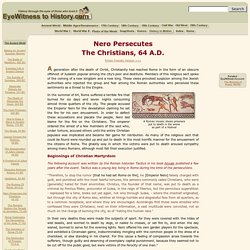 A generation after the death of Christ, Christianity had reached Rome in the form of an obscure offshoot of Judaism popular among the city's poor and destitute. Members of this religious sect spoke of the coming of a new kingdom and a new king. These views provoked suspicion among the Jewish authorities who rejected the group and fear among the Roman authorities who perceived these sentiments as a threat to the Empire.