What Causes an Avalanche. The most common and deadly type of avalanche is called a "slab avalanche," in which a cohesive plate of snow shatters like a pane of glass and slides as a unit off the mountainside, according to the Utah Avalanche Center. 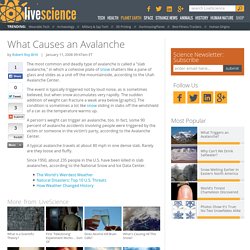 The event is typically triggered not by loud noise, as is sometimes believed, but when snow accumulates very rapidly. The sudden addition of weight can fracture a weak area below [graphic]. Natural Hazards - Avalanches. Types, Causes and Effects of Avalanches. Spending winters in the mountains with nothing but white snow on all sides can be quite relaxing. 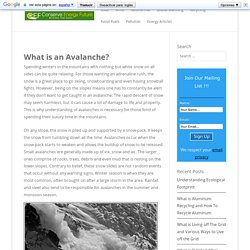 For those wanting an adrenaline rush, the snow is a great place to go skiing, snowboarding and even having snowball fights. However, being on the slopes means one has to constantly be alert if they don’t want to get caught in an avalanche. What Causes an Avalanche? If you’re like most kids, you probably love snow. 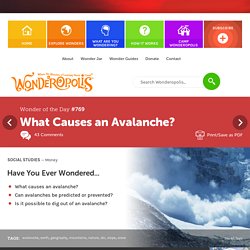 Not only does it occasionally get you out of school, but it’s also fun to play with. Who doesn’t love to sled and build snowmen? Snow can also be dangerous, too. You’ve probably heard your parents talk about how difficult it can be to drive in snow. Automobile accidents aren’t the only dangers created by snow, though. If you’re ever skiing in the mountains, you’ll want to be aware of the possibility of avalanches. Avalanches can be caused by many different things. Artificial triggers can also cause avalanches. Avalanches usually occur during the winter and spring, when snowfall is greatest. Although avalanches occur suddenly, warning signs exist that allow experts to predict — and often prevent — them from occurring.

GCSE Bitesize: Causes of avalanches. What causes an avalanche? Avalanches are frequent killers of backcountry skiers and snowmobilers, and even the most experienced mountain climbers can get caught up in them. 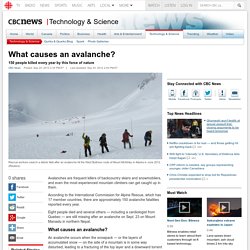 According to the International Commission for Alpine Rescue, which has 17 member countries, there are approximately 150 avalanche fatalities reported every year. Eight people died and several others — including a cardiologist from Quebec — are still missing after an avalanche on Sept. 23 on Mount Manaslu in northern Nepal. The Rogers Pass avalanche of 1910 changed lives and history : Revelstoke Current. Posted by editor on March 3, 2010 · 1 Comment. 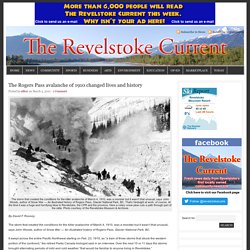 Wellington Disaster - America's Worst Avalanche. In late February, 1910, days of endless snow in the High Cascades prevented two trains from traveling further on the "Great Northern Route through Stevens Pass" in the state of Washington. 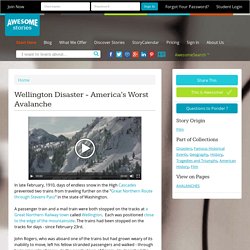 A passenger train and a mail train were both stopped on the tracks at a Great Northern Railway town called Wellington. Each was positioned close to the edge of the mountainside. The trains had been stopped on the tracks for days - since February 23rd. John Rogers, who was aboard one of the trains but had grown weary of its inability to move, left his fellow stranded passengers and walked - through huge amounts of snow - to the nearby town of Scenic. The most deadly avalanches in history. This is a factfile of some of the most deadly incidents in history: Yungay, Peru: An avalanche on Mount Huascaran, Peru, buried the town of Yungay in snow and ice in May 1970. 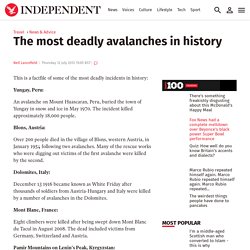 The incident killed approximately 18,000 people. Blons, Austria: Over 200 people died in the village of Blons, western Austria, in January 1954 following two avalanches. Dolomites, Italy: December 13 1916 became known as White Friday after thousands of soldiers from Austria-Hungary and Italy were killed by a number of avalanches in the Dolomites. Mont Blanc, France: Eight climbers were killed after being swept down Mont Blanc du Tacul in August 2008. The 10 Deadliest Avalanche Events in History. Yungay, Peru, 31 May 1970 (20,000 casualties) – On 31 May 1970, an earthquake off the coast of Peru caused a substantial section of the north slope of Mt. 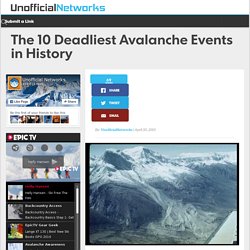 Huascaran to collapse. [Situated in the Cordillera Blanca, the world’s highest tropical mountain range, Mount Huascarán rises to 6768 m above sea-level.] The avalanche moved down hill at a speed of 100 MPH with a mass of roughly 80 million cubic feet of ice, mud and rock. It ran nearly 11 miles, burying the towns of Yungay and Ranrahirca in up to 300 feet of rock and debris. Estimates suggest that the earthquake killed over 20,000 people. Tyrolean Alps, 13 December 1916 (10,000 casualties) – Over a 24-hour period during World War 1 Italian and Austrian forces died in a series of avalanches caused by a mixture of heavy snowfall and man-made explosives. Canadian Avalanche Association. Avalanche Canada. The upper ridge is packing its bags and catching the first train out of British Columbia. 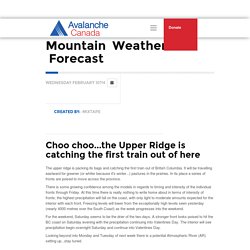 It will be travelling eastward for greener (or whiter because it's winter...) pastures in the prairies. In its place a series of fronts are poised to move across the province. There is some growing confidence among the models in regards to timing and intensity of the individual fronts through Friday. At this time there is really nothing to write home about in terms of intensity of fronts; the highest precipitation will fall on the coast, with only light to moderate amounts expected for the interior with each front. Freezing levels will lower from the exceptionally high levels seen yesterday (nearly 4000 metres over the South Coast) as the week progresses into the weekend. Avalanche Canada.