Discover the best office chair 2016, the ones that will reduce lower back pain, and compare models and features with our utlimate guide to sitting.

Best Running Shoes. While it would be impossible to create a list of the “best” running shoes that fit the needs of every individual runner out there, that still hasn’t stopped us at Gadget Review from spending hours of research to help you learn how to choose running shoes, no matter if you’re entering your 10th marathon this year or just want something to help you get in shape over the weekend. 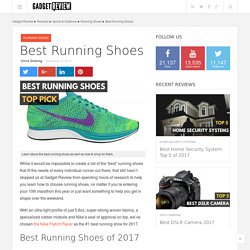 With an ultra-light profile of just 5.6oz, super-strong woven fabrics, a specialized rubber midsole and Nike’s seal of approval on top, we’ve chosen the Nike Flyknit Racer as the #1 best running shoe for 2017. Best Running Shoes of 2017 How We Choose the Best Running Shoes On a personal note, I’ve been an avid three-times-a-week runner for around 13 years, and have gone through upwards of 25+ pairs of running shoes of my own over that same period. Asus Strix 7.1 Is A Wireless Gaming Headset With Surround Sound - And An Extra Low Price. Asus has officially launched its new Strix Wireless 7.1 gaming headset, and it’s…very Asus-ish. 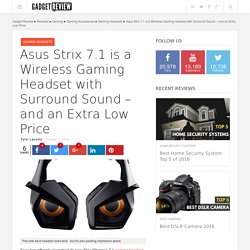 It’s also very impressive. Behind that Asus hardkore edgy design (complete with plenty of actual edges) there’s a powerful and amazingly affordable headset that could wind up on our best wireless gaming headset of 2016 list…at least, if it’s all that it claims to be. That 7.1 stands, of course, for 7.1 surround sound, which we always like to see on a gaming headset – it makes a big difference for environmental noise and scouting.

Apparently the headset has 10 different drivers for top-line sound, as well as gaming flourishes like customizable lighting effects and real protein leather cushioning. The battery lasts around 10 hours, nothing amazing but nothing to complain about, either. That audio controller looks odd, but it’s packed with features. There are two things that really make this gaming headset stand out apart from those specs. The second impressive thing is the price. GTA 5 Mod Lets You Crouch and Teabag At Last. As you may know, we like to share any especially cool Grand Theft Auto tricks and cheats that we come across. 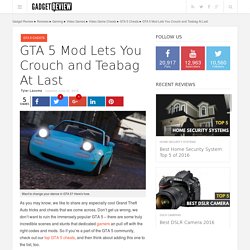 Don’t get us wrong, we don’t want to ruin the immensely popular GTA 5 – there are some truly incredible scenes and stunts that dedicated gamers an pull off with the right codes and mods. So if you’re a part of the GTA 5 community, check out our top GTA 5 cheats, and then think about adding this one to the list, too. This particular mod is all about standing – or actually about crouching. The original, vanilla form of HTA 5 was a great game, but it was also a bit lacking in the stance department, especially if you want to crouch and creep not only at specific spots, but also everywhere in the game.

Crouch vs stealth: Which do you want more? Download the modification from jedijosh920 on gta5-mods.com, and you will have the ability to switch between crouching, prone position, and standing at will. People Also Viewed. Best Smartphone Cameras. The best smartphone cameras are pretty amazing these days. 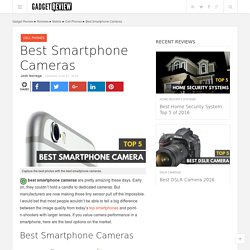 Early on, they couldn’t hold a candle to dedicated cameras. But manufacturers are now making those tiny sensor pull off the impossible. I would bet that most people wouldn’t be able to tell a big difference between the image quality from today’s top smartphones and point-n-shooters with larger lenses. If you value camera performance in a smartphone, here are the best options on the market. Best Smartphone Cameras #1 Pick Samsung Galaxy S7 Samsung equips the Galaxy S7 and S7 Edge camera with solid low-light performance and lightning fast AF. Price: $672 | Read Full Review: Samsung Galaxy S7 Review | Rear Camera: 12MP (Dual Pixel), f/1.7, OIS | Front Camera: 5MP, f/1.7 WHY IT’S A TOP PICK: Samsung’s new sensor is the whole technological package, and its performance is stellar.

Best Office Chairs. Much like a bed, people often underestimate the need for a top quality office chair. 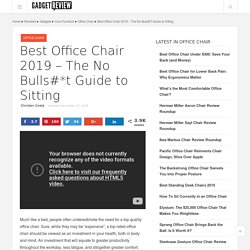 Sure, while they may be “expensive”, a top-rated office chair should be viewed as an investment in your health, both in body and mind. An investment that will equate to greater productivity throughout the workday, less fatigue, and altogether greater comfort. That’s why after 300 long hours on the Herman Miller Embody Chair,we ranked it our one of the #1 best office chairs. Why? It’s a desk chair that promotes movement which in turn increases blood flow, in large part thanks to its innovative back system that is analogous to that of a human’s spine. . #1 Pick Herman Miller Embody Chair – Editor’s Choice/Top Office Chair for Back Pain The Herman Miller Embody Chair is a winner in our book thanks to it’s special back that auto adjusts to its user.