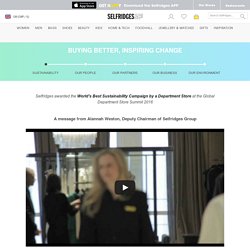 Over the past year our Buying team has been focused on what we call Buying Better. This journey started with a training programme for our buying and merchandising functions, led by the Centre for Sustainable Fashion to understand the issues and impacts of the fashion industry. We began to shape our response to these challenges by focusing on making sustainability part of the buying conversation, ensuring our brands meet our standards on ethical trade, promoting best practice and championing new brands with a sustainable focus.

Our Ethical Trade Requirements underpin our approach to source with quality and deliver with care. We choose our concession partners carefully because it is important to us who represents Selfridges in our stores. UK population increased by half a million, official figures show. The UK population grew by half a million last year to 65.1 million, according to the latest Office for National Statistics official estimate. 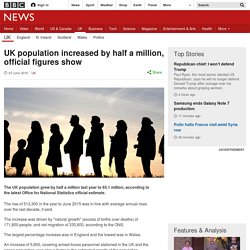 The rise of 513,300 in the year to June 2015 was in line with average annual rises over the last decade, it said. The increase was driven by "natural growth" (excess of births over deaths) of 171,800 people, and net migration of 335,600, according to the ONS. The largest percentage increase was in England and the lowest was in Wales. An increase of 5,800, covering armed forces personnel stationed in the UK and the prison population, was also a factor in the estimated growth of the population, according to the ONS. The older population has continued to rise, with more than 11.6 million people (17.8% of the population) now aged 65 and over, and 1.5 million people (2.3% of the population) aged 85 and over in mid-2015.

Elsewhere, the figure for natural growth was at its lowest for 10 years. Snapchat launches sunglasses with camera. Image copyright Snap Messaging app firm Snapchat has announced its first gadget - sunglasses with a built-in camera. 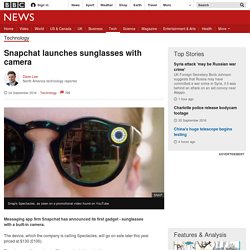 The device, which the company is calling Spectacles, will go on sale later this year priced at $130 (£100). The glasses will record up to 30 seconds of video at a time. As part of the announcement, Snapchat is renaming itself Snap, Inc. The renaming decision underlined the company’s apparent ambition to go beyond the ephemeral messaging app, a product which is highly popular with young people. An article published by the Wall Street Journal on Friday showed Snap’s 26-year-old creator Evan Spiegel in a series of pictures taken by fashion legend Karl Lagerfeld. In an interview, Mr Spiegel explained his rationale for creating Spectacles. "It was our first vacation, and we went to [Californian state park] Big Sur for a day or two. "And when I got the footage back and watched it, I could see my own memory, through my own eyes - it was unbelievable.

Broken Glass. BHS brand to be revived online in the UK. Image copyright BHS The collapsed retailer BHS is to re-launch as an online shop, selling some of the most popular items previously available on its website. 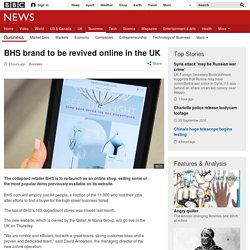 BHS.com will employ just 84 people, a fraction of the 11,000 who lost their jobs after efforts to find a buyer for the high-street business failed. The last of BHS's 163 department stores was closed last month. The new website, which is owned by the Qatari Al Mana Group, will go live in the UK on Thursday. "We are nimble and efficient, but with a great brand, strong customer base and a proven and dedicated team," said David Anderson, the managing director of the new online operation. Image copyright PA Mr Anderson added that the website would have "a number of advantages over a typical start-up", including an "iconic" brand and a loyal customer base in the UK, including 1.2 million former online shoppers. Syria: The story of the conflict. Image copyright Getty Images More than 250,000 Syrians have lost their lives in four-and-a-half years of armed conflict, which began with anti-government protests before escalating into a full-scale civil war. 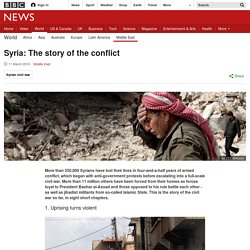 More than 11 million others have been forced from their homes as forces loyal to President Bashar al-Assad and those opposed to his rule battle each other - as well as jihadist militants from so-called Islamic State. This is the story of the civil war so far, in eight short chapters. 1. Uprising turns violent. US election 2016 polls and odds: Latest Donald Trump and Hillary Clinton results forecast in race to be president. The Counted: tracking people killed by police in the United States. London nightclub Fabric to close permanently after licence is revoked. Brexit: All you need to know about the UK leaving the EU. Image copyright Getty Images. 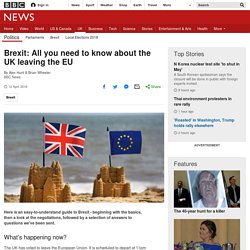 Who is Theresa May: A profile of UK's new prime minister.