Norse Mythology by Neil Gaiman review – nice dramatic narratives, but where’s the nihilism? Any retelling of a tale from times long past must be an interpretation, a translation into language and concepts that the present audience understands. 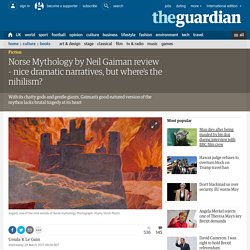 SPIEGEL Interview with Umberto Eco: 'We Like Lists Because We Don't Want to Die' SPIEGEL: Mr. 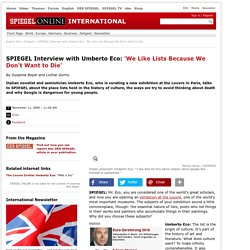 How Robots & Algorithms Are Taking Over by Sue Halpern. The Glass Cage: Automation and Us by Nicholas Carr Norton, 276 pp., $26.95 In September 2013, about a year before Nicholas Carr published The Glass Cage: Automation and Us, his chastening meditation on the human future, a pair of Oxford researchers issued a report predicting that nearly half of all jobs in the United States could be lost to machines within the next twenty years. 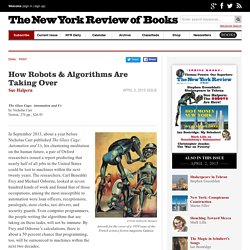 The researchers, Carl Benedikt Frey and Michael Osborne, looked at seven hundred kinds of work and found that of those occupations, among the most susceptible to automation were loan officers, receptionists, paralegals, store clerks, taxi drivers, and security guards. Patti Smith on Time, Transformation, and How the Radiance of Love Redeems the Rupture of Loss. “Is there anything we know more intimately than the fleetingness of time, the transience of each and every moment?” 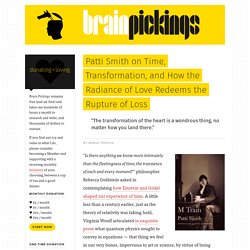 Philosopher Rebecca Goldstein asked in contemplating how Einstein and Gödel shaped our experience of time. A little less than a century earlier, just as the theory of relativity was taking hold, Virginia Woolf articulated in exquisite prose what quantum physics sought to convey in equations — that thing we feel in our very bones, impervious to art or science, by virtue of being ephemeral creatures in a transient world. That transcendent transience is what beloved musician, artist, and poet Patti Smith explores in M Train (public library) — a most unusual and breathtaking book: part memoir, part dreamscape, part elegy for the departed and for time itself.

Einstein, Gödel, and Our Strange Experience of Time: Rebecca Goldstein on How Relativity Rattled the Flow of Existence. By Maria Popova “An hour, once it lodges in the queer element of the human spirit, may be stretched to fifty or a hundred times its clock length,” Virginia Woolf marveled at the extraordinary elasticity of how we experience time, which modern psychologists are only beginning to fathom. 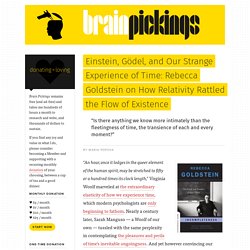 Nearly a century later, Sarah Manguso — a Woolf of our own — tussled with the same perplexity in contemplating the pleasures and perils of time’s inevitable ongoingness. Politically Correct “Lord of the Flies” - The New Yorker. By the time Ralph finished blowing the conch, a large crowd had formed. 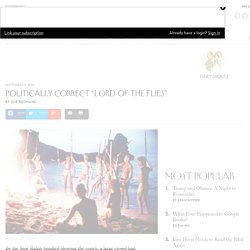 “Well, then,” he said, clearing his throat. “First rule: we can’t have everyone talking at once.” Jack was on his feet. “We’ll have rules!” Timothy Snyder's 'Black Earth' Offers a New Theory of Hitler's Anti-Semitism. The evocative title of Timothy Snyder’s new book—Black Earth: The Holocaust as History and Warning—is a reference to the fertile soil of Ukraine, where Adolf Hitler hoped to establish lebensraum, or “living space,” for the German race. 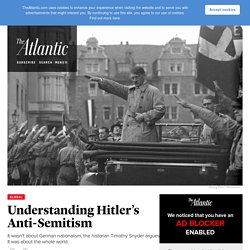 And yet it could also be seen as an allusion to what Snyder argues is the underappreciated importance of ecology in Hitler’s worldview. Snyder, a history professor at Yale University, is building on his 2010 book, Bloodlands: Europe Between Hitler and Stalin, which highlighted the devastation visited upon World War II’s often-ignored but hugely consequential Eastern Front. But whereas Bloodlands examined Nazi and Soviet atrocities in Eastern Europe, Black Earth travels inside the mind of Hitler himself—a mind from which sprang the murder of 6 million Jews. 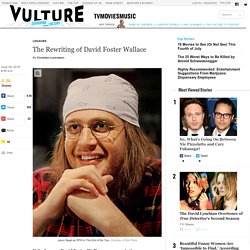 In the seven years since his suicide, he’s slipped out of the hands of those who knew him, and those who read him in his lifetime, and into the cultural maelstrom, which has flattened him. He has become a character, an icon, and in some circles a saint. A writer who courted contradiction and paradox, who could come on as a curmudgeon and a scold, who emerged from an avant-garde tradition and never retreated into conventional realism, he has been reduced to a wisdom-dispensing sage on the one hand and shorthand for the Writer As Tortured Soul on the other.

The night I helped my mother escape North Korea. I set my phone to silent, dressed myself entirely in black and walked calmly and purposefully through the hotel lobby. 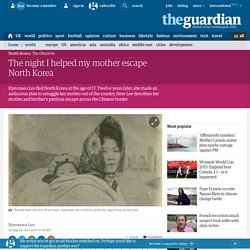 Outside I hailed a cab and directed the driver to take me to the point where the town ended, about 200 yards from the river. There, at the end of a row of low buildings, was the derelict house among the trees where I was to meet my mother and brother. I crouched down behind an old garden wall and waited. 100 contos de Borges e Cortázar para ler online.

"Re-Reading World History Through an 'All-Seeing Eye': Cultural Relativism in Gore Vidal's Creation" Vassilaki Papanicolaou consider Creation for its literary value and, figuratively, to provide a perspicacious analysis of what appears to be a fundamental key of its understanding: the bipolar motif of insight/blindness. 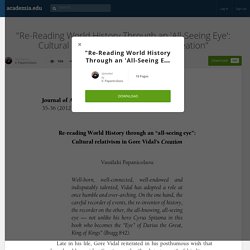 Cyrus Spitama’s vision has indeed metaphorical connotations that have a lot to do with the author’s hidden motivations behind his particular appraisal for the book. For both purposes, a safe approach is needed that consists in returning to theoretical fundamentals. Vertex Interview with Philip K. Dick. Interviewer / Arthur Byron Cover [From: Vertex, Vol. 1, no. 6, February 1974.] “He’s totally mad,” said one of his fans, “but it’s such a wonderful madness.” Philip K. Dick has been called everything from science fiction’s bad boy to the most creative mind in the field, but there’s one thing he’s never been accused of: Failure to entertain his readers!

And what more can a writer ask than that? Allen Ginsberg's "Howl" and the Paperback Revolution. Reproduced in partnership with The Common Review, the magazine of the Great Books Foundation. All the Beat Generation writers occupy a contested space in conversations about American literature. The creators and guardians of the modernist canon dismissed Beat writers such as Allen Ginsberg, Jack Kerouac, and William S. Burroughs as subliterary, mere popular culture icons, vacuous self-promoters, and even inciters of juvenile delinquency. Technology Entrepreneurship: Taking Innovation to the Marketplace - Thomas N. Duening, Robert A. Hisrich, Michael A. Lechter. The Origin of Consciousness in the Breakdown of the Bicameral Mind - Julian-Jaynes-Origin-of-Consciousness-in-the-Breakdown-of-the-Bicameral-Mind.pdf. 9 Easter Eggs From the Bookshelf in Interstellar. In Interstellar, a bookshelf holds a trove of secrets. © 2014 Warner Bros. Entertainment Inc., and Paramount Pictures Corporation.

All rights reserved. “Love is the one thing we’re capable of perceiving that transcends dimensions of time and space,” says Dr. The 100 best novels: No 61 – Murphy by Samuel Beckett (1938) “The sun shone, having no alternative, on the nothing new.” Samuel Beckett’s entry into this series with his characteristically bleak, nihilistic humour, marks another milestone: the first appearance since Shakespeare of a writer who will innovate as brilliantly in theatre as much as in poetry and prose.

Beckett, indeed, is one of the giants of 20th-century literature, in any language. Murphy is an absurdist masterpiece, a first novel that emerged from a long literary apprenticeship, mainly conducted in post-first world war Paris. James Joyce's dirty letters - Old Love Letters - tribe.net. The Raven: Lou Reed’s Adaptation of Edgar Allan Poe, Illustrated by Italian Artist Lorenzo Mattotti. By Maria Popova A graphic novel “meant to be heard in the mind.”