SEO Doesn’t Have To Be A Shot In The Dark. To many startups, search engine optimization (SEO) is a task that sits on their company’s back burner. 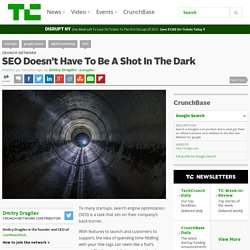 With features to launch and customers to support, the idea of spending time fiddling with your title tags can seem like a fool’s errand. That’s especially true when there’s no guarantee that your hard work will result in a single additional visitor from Google. That’s one of the reasons that a recent study ranked SEO as the third most important marketing priority for startups (behind social media and content marketing). Why do startups tend to shy away from SEO? From working with dozens of startups, I’ve found that founders hate the uncertainty that comes from SEO. Yes, there’s an element of uncertainty with SEO (after all, Google doesn’t publicly reveal the factors they use to rank websites).

Backlinks, content and page speed are key Backlinko recently teamed up with a handful of SEO software companies to evaluate the factors that are most important for success with SEO today. SBTech to provide gambling software for new Latin American clients. SBTech will provide two Latin American gambling giants with its award-winning sports betting system, which will be able to operate on multiple channels. 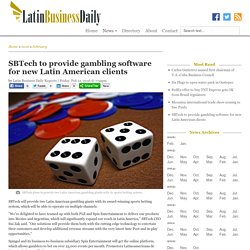 "We're delighted to have teamed up with both PLE and Spin Entertainment to deliver our products into Mexico and Argentina, which will significantly expand our reach in Latin America," SBTech CEO Itai Zak said. "Our solutions will provide them both with the cutting-edge technology to entertain their customers and develop additional revenue streams with the very latest Ante Post and in-play opportunities. " Spingol and its business-to-business subsidiary Spin Entertainment will get the online platform, which allows gamblers to bet on over 25,000 events per month. Promotora Latinoamericana de Entretenimiento will also carry the products. 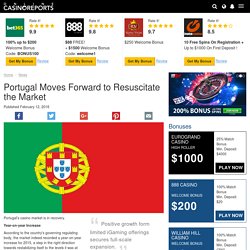 Portugal's casino market is in recovery. Year-on-year Increase According to the country's governing regulating body, the market indeed recorded a year-on-year increase for 2015, a step in the right direction towards restabilizing itself to the levels it was at before a precipitous decline. According to the Associação Portuguesa de Casino (ACP), the 11 operating casinos posted revenues of €288.6 million ($312.8 million) last year, improving 8% from the 2014 12-month period. Breakdown The breakdown saw table game revenue gain 12.4% year-on-year, and slot machine revenue increasing 7.2%. The biggest casino earner by company in Portugal was Estoril-Sol, which generated €182.3 million. The positive growth is the first step hopefully of a few that can complete a recovery from the 37% decline experienced between 2008 and 2014 that the market is seeking to rebound from.

Full-scale Implementation Plan. Legislation a ‘game changer’ for the gaming sector. Two years ago, Joseph Cuschieri, the executive chairman of the Malta Gaming Authority (LGA as it was then) told Vanessa Macdonald that he was looking at ways to futureproof the gaming sector. 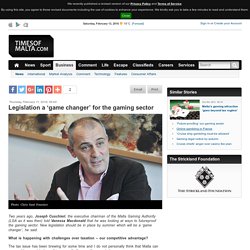 New legislation should be in place by summer which will be a ‘game changer’, he said. What is happening with challenges over taxation – our competitive advantage? The tax issue has been brewing for some time and I do not personally think that Malta can reasonably expect to keep things exactly the way they are today. It is no different to when we were going to join the EU and there were international trading companies that would not fit into the onshore tax regime. We adapted, changed and thrived. I also believe that when there is a certain critical mass – as there is with financial services and gaming ­– it creates its own gravity and attraction. I am not saying that there would not be some casualties but it won’t mean the end of the sector. This is not a dark cloud looming. Fantasy sports gambling becomes major issue.