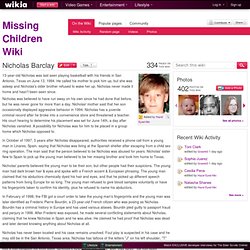 He called his mother to pick him up, but she was asleep and Nicholas's older brother refused to wake her up. Nicholas never made it home and hasn't been seen since. Nicholas was believed to have run away on his own since he had done that before, but he was never gone for more than a day. Nicholas' mother said that her son occasionally displayed aggressive behavior in 1994. Nicholas has a juvenile criminal record after he broke into a convenience store and threatened a teacher. In October of 1997, 3 years after Nicholas disappeared, authorities received a phone call from a young man in Linares, Spain, saying that Nicholas was living at the Spanish shelter after escaping from a child sex ring operation. Nicholas' parents believed the young man to be their son, but other people had their suspicions. Nicholas has never been located and his case remains unsolved. The Imposter (2012 film)

The Imposter is a 2012 British-American documentary film about the 1997 case of the French confidence trickster Frédéric Bourdin, who impersonated Nicholas Barclay, a Texas boy who disappeared at the age of 13 in 1994. 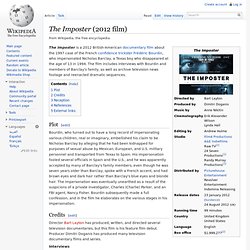 The film includes interviews with Bourdin and members of Barclay's family, as well as archive television news footage and reenacted dramatic sequences. Bourdin, who turned out to have a long record of impersonating various children, real or imaginary, embellished his claim to be Nicholas Barclay by alleging that he had been kidnapped for purposes of sexual abuse by Mexican, European, and U.S. military personnel and transported from Texas to Spain. His impersonation fooled several officials in Spain and the U.S., and he was apparently accepted by many of Barclay's family members, even though he was seven years older than Barclay, spoke with a French accent, and had brown eyes and dark hair rather than Barclay's blue eyes and blonde hair. 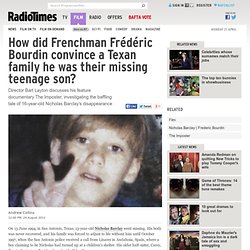 His body was never recovered, and his family was forced to adjust to life without him until October 1997, when the San Antonio police received a call from Linares in Andalusia, Spain, where a boy claiming to be Nicholas had turned up at a children’s shelter. His older half-sister, Carey, flew to Spain to collect her long-lost half-brother. This boy – who, even when cloaked in baseball cap and scarf, looked perceptibly older than Nicholas (who would have been 16) – claimed to have been trafficked to Spain and systematically abused, his brown eyes turned blue by horrific experiments.

The ordeal had, it appeared, prematurely aged him and left him mentally scarred, unwilling to talk about his experiences. Even stranger, the “Nicholas” who was emotionally reunited with his family at San Antonio airport spoke with the hint of a French accent. To dust off another truism, you couldn’t make this film up. The Imposter: Frederic Bourdin fooled family into thinking he was missing schoolboy. THE Barclay family were euphoric when missing teenage son Nicholas was found alive and well. 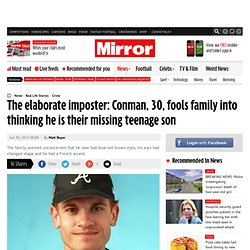 Texas schoolboy Nicholas, who disappeared aged 13, turned up three years later thousands of miles away in Spain. For mum Beverly it was like a miracle, and she showered him with affection after he was flown home. The family seemed unconcerned that Nicholas now had blue eyes, not brown as before, his ears had changed shape and he had a French accent. It took a private investigator to unearth the truth – the new Nicholas was an impostor.

He was Frenchman Frederic Bourdin who had never set foot on US soil before. The amazing story has now been made into a British documentary called The Imposter explaining how for five months Bourdin convinced family and friends that he really was Nicholas. And when the real identity of the man who would later be called The Chameleon was revealed, the truth about his life seemed even more incredible than the story he had invented. Internet Getty. The Imposter: I am still digging for body of Nicholas Barclay, says private detective.