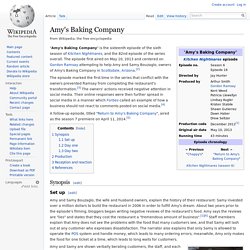 The episode first aired on May 10, 2013 and centered on Gordon Ramsay attempting to help Amy and Samy Bouzaglo, owners of Amy's Baking Company in Scottsdale, Arizona.[2] The episode marked the first time in the series that conflict with the owners prevented Ramsay from completing the restaurant's transformation.[3] The owners' actions received negative attention in social media. Their online responses were then further spread in social media in a manner which Forbes called an example of how a business should not react to comments posted on social media.[4] A follow-up episode, titled "Return to Amy's Baking Company", aired as the season 7 premiere on April 11, 2014.[5] Synopsis[edit] Set up[edit] Hacker Typer. Playing Space Invaders with Real Fire and Lasers. Making a Space Invaders game is up there on the list of most unconventional things you could do with a laser cutter. 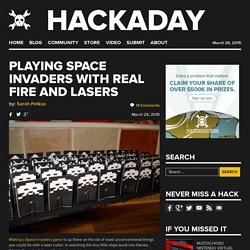 In watching the tiny little ships burst into flames, [Martin Raynsford’s] modification has got to be one of the more dangerous looking ones we’ve seen as well. [Martin] always had the desire to make a tangible version of the classic game. Since his Whitetooth A1 laser cutter already contained the bulk of the moving hardware needed, not to mention an actual high powered laser to “pew pew” with, he decided it was the perfect starting point for such a project. The game is played looking down into the cutter since the laser of course fires in that direction, however a basic webcam is mounted to the laser assembly so that you can view the game on a computer screen at the proper perspective. Organisationer advarer mod terrorpakke: Masseovervågning er imod grundrettigheder. Teresa's Jokers Computer Jokes List. 10 Examples Where Movies/TV Got Hacking Wrong. When it comes to computers, one gets the impression that Hollywood writers don’t know what they are talking about. 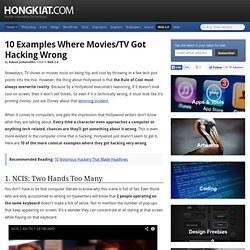 Every time a character even approaches a computer or anything tech related, chances are they’ll get something about it wrong. Core War. Core War is a programming game created by D. 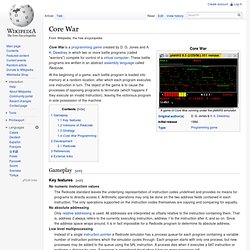 G. Jones and A. K. Dewdney in which two or more battle programs (called "warriors") compete for control of a virtual computer. These battle programs are written in an abstract assembly language called Redcode. At the beginning of a game, each battle program is loaded into memory at a random location, after which each program executes one instruction in turn.

Gameplay[edit] Key features[edit] If programming languages were vehicles. C was the great all-arounder: compact, powerful, goes everywhere, and reliable in situations where your life depends on it. 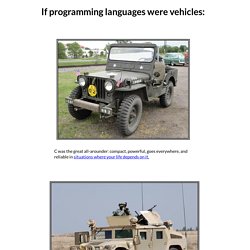 C++ is the new C — twice the power, twice the size, works in hostile environments, and if you try to use it without care and special training you will probably crash. C♯ is C++ with more safety features so that ordinary civilians can use it. #Vasegate newsjacking. 7 Ways To Be Insufferable On Facebook. The memory is vivid. 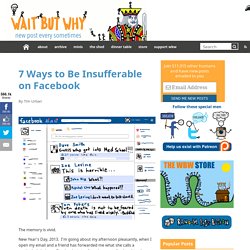 New Year’s Day, 2013. I’m going about my afternoon pleasantly, when I open my email and a friend has forwarded me what she calls a particularly heinous Facebook status from her news feed, written by someone we’ll call Daniel. It read: 2012 was a biggg year for me. I left my amazing job at NBC to move back to Chicago. By the time I finished reading, I realized that my non-phone hand was clutching tightly to my forehead, forcefully scrunching my forehead skin together. It was everything bad about everything, all at once. But instead of distancing myself from the horror, I soaked in it. It made me think about what makes terrible Facebook behavior terrible, and why other Facebook behavior isn’t annoying at all.

A Facebook status is annoying if it primarily serves the author and does nothing positive for anyone reading it. Reverse Engineering af en programmørvittighed. Danske medier fuppet af falsk dværgpenis. Second. Someone has made fake London Underground signs, and whoever did it is a ruddy genius. Gode gamle danske ord der bruges alt for lidt. Postman Pat - randy old git! Mr Lilipup has worked this out after too much Postman Pat! 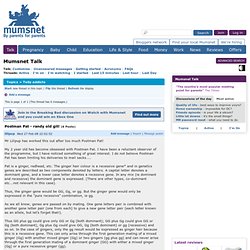 My 2 year old has become obsessed with Postman Pat. I have been a reluctant observer of the programme, but I have noticed something of great interest. I do not believe Postman Pat has been limiting his deliveries to mail sacks.... Pat is a ginger, redhead, etc. The ginger hair colour is a recessive gene* and in genetics genes are described as two components denoted by letters. Thus, the ginger gene would be GG, Gg, or gg. As we all know, genes are passed on by mating. If programming languages were religions...

C would be Judaism - it's old and restrictive, but most of the world is familiar with its laws and respects them. 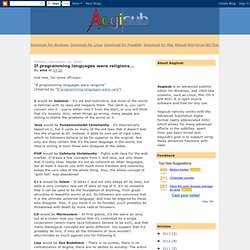 The catch is, you can't convert into it - you're either into it from the start, or you will think that it's insanity. Also, when things go wrong, many people are willing to blame the problems of the world on it. Australian Magician James Galea's Unbelievable Trick. Why Linux will not displace Windows. Translations of My hovercraft is full of eels in many languages.