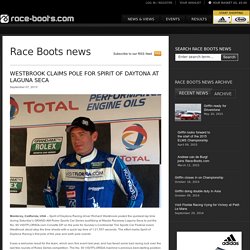 Westbrook stood atop the time sheets with a quick lap time of 1:21.557-seconds. The effort marks Spirit of Daytona Racing’s first pole of the year and sixth pole overall. It was a welcome result for the team, which won this event last year, and has faced some bad racing luck over the last few rounds of Rolex Series competition. The No. 90 VISITFLORIDA machine’s previous best starting position this year came at Barber Motorsports Park and Mid-Ohio Sports Car Course when Westbrook’s co-driver Ricky Taylor took second on the grid in each event. 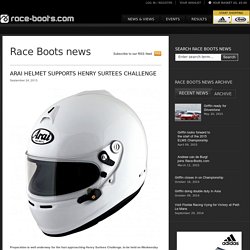 The Challenge, now in its third year, has become an essential fixture on the racing calendar for motorsport talent in their 16th year or over. The Henry Surtees Foundation invites kart and car racers going up the motorsport ladder, to compete for a spectacular range of prizes that will accelerate their careers and aid them in their race programme preparation for 2014. This special annual event, organised by former F1 World Champion, John Surtees OBE, who set up the Foundation in memory of his son, will award the top three drivers with a prestigious Henry ‘H’ trophy.

Drivers will battle it out, using the superb Club100 Birel karts, for the chance to win the best prizes ever offered at a kart meeting! Prizes for fastest lap, the most unlucky driver and a heavyweight prize for 80kg or above will also be awarded. Arai car helmet - Promotional offer. Race-Boots.com Karma Enduro charity auction - Race Boots. Race-Boots.com sponsors BRDC award - Race Boots.

Westbrook gets FIA GT campaign off to a platinum start - Race Boots. Silverstone, United Kingdom. adidas and Race-Boots.com supported Richard Westbrook got his 2009 FIA GT Championship campaign off to the best possible start with a win in the famous Tourist Trophy race at Silverstone. 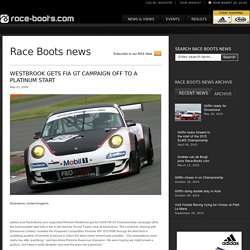 The Londoner, sharing with Emmanuel Collard, rocketed the Prospeed Competition Porsche 997 GT3 RSR through the field from a qualifying position of seventh to secure a victory the team never dreamt was possible. “ Our expectations were really low after qualifying,” said two-times Porsche Supercup champion. We were hoping we might sneak a podium, but it was a really fantastic race and the team did a great job.” Smith takes runaway first victory in Spain - Race Boots. Jerez, Spain. 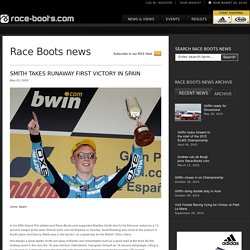 In his 50th Grand Prix adidas and Race-Boots.com supported Bradley Smith shot to his first ever victory by a 13 second margin at the Gran Premio bwin.com de España on Sunday. Scott Redding was close to the podium in fourth place and Danny Webb was in the top ten, on a great day for the British 125cc riders. Not always a great starter Smith got away brilliantly and immediately built up a good lead at the front. By the midway point in the race the 18 year-old from Oxfordshire, had given himself an 18 second advantage, riding a lonely race to eventually cross the line still well ahead of the chasing pack for his maiden GP triumph. Adidas miCoach Super1 Challenge - Race Boots. Autosport International , NEC, Birmingham, UK The 2012 adidas miCoach Super1 Challenge in association with Porsche Human Performance and Race-Boots.com will be held at the Porsche Experience Centre, Silverstone. 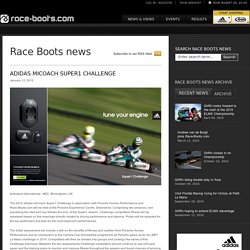 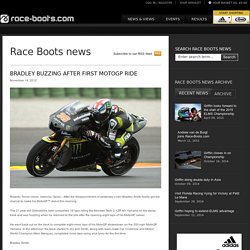 The 21 year old Oxfordshire rider completed 16 laps riding the Monster Tech 3 YZR M1 Yamaha on the damp track and was buzzing when he returned to the pits after the opening eight laps of his MotoGP career. He went back out on the track to complete eight more laps of his MotoGP shakedown on the 200 mph MotoGP Yamaha. In the afternoon the track started to dry and Smith, along with team-mate Cal Crutchlow and Moto2 World Champion Marc Marquez, completed more laps using slick tyres for the first time. Bradley Smith: “I’m still buzzing and what a feeling to ride such an unbelievable motorcycle.

I was nervous and cautious as I left pit line on wet weather tyres and felt all eyes were focused on me but the bike was an absolute delight to ride. The traction control and tyres were so different to anything I’ve experienced before. End. Nick Tandy secures Porsche works drive. - Race Boots. Stuttgart, Germany. – Nick Tandy secures a contract as a Porsche works driver. 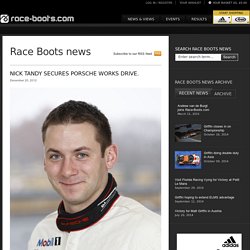 The 28-year-old from Great Britain is now the tenth of the member of the Porsche factory driver squad. “A big dream has come true. I’m absolutely thrilled,” says Nick Tandy. “Ever since I first drove a Porsche 911 GT3 Cup it was clear to me that there could be nothing better than to become a works pilot for Porsche. It’s great that Porsche recognised what I have achieved so far and that they included me in the factory pilot family. “I’m delighted to welcome Nick as our tenth works driver,” says Hartmut Kristen, Head of Porsche Motorsport. Nick Tandy kicks off his first season as a Porsche works driver in Daytona. Photo: Porsche AG. VISIT FLORIDA Joins Spirit of Daytona for Rolex 24 At Daytona - Race Boots. Porsche Human Performance: Get Race Fit 2013. - Race Boots.

Silverstone, Northamptonshire, UK Porsche Human Performance were delighted to welcome back Mark Webber for the fifth ‘Get Race Fit’ event at the Porsche Experience Centre based in Silverstone Circuit. 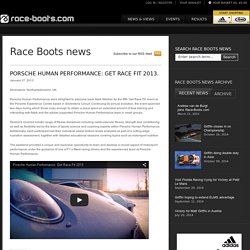 Continuing its annual evolution, the event spanned two days during which those lucky enough to obtain a place spent an extended amount of time training and interacting with Mark and the adidas supported Porsche Human Performance team in small groups. Sessions covered holistic range of fitness disciplines including cardiovascular fitness, strength and conditioning as well as flexibility led by the team of sports science and coaching experts within Porsche Human Performance.

Additionally, each participant had their individual sweat sodium levels analysed as part of a cutting-edge hydration assessment, together with detailed educational sessions covering topics such as motorsport nutrition. Race-Boots.com at Daytona 24 hours with Spirit of Daytona. - Race Boots. Griffin doing double duty in Asia - Race Boots. Irish GT ace, Matt Griffin is in China this weekend to compete in both the GT Asia and the Asian Le Mans series, both to be held at the Shanghai Grand Prix Circuit, a place that Matt had the pleasure in driving in the World Endurance Championship (WEC) in 2013. 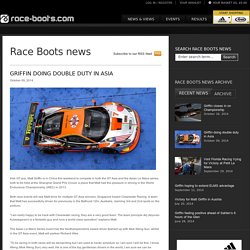 Both race events will see Matt drive for multiple GT Asia winners, Singapore based Clearwater Racing. A team that Matt has successfully driven for previously in the Bathurst 12hr, Australia, claiming 3rd and 2nd spots on the podium. “I am really happy to be back with Clearwater racing, they are a very good team. Race Boots news. British Touring Car Championship. Image Source: Purple M Photo The weekend of the 27th-28th September brings the penultimate race weekend of the 2014 British Touring Car Championship season, with a host of action in store including the twists and turns of the various championships. 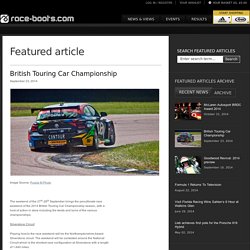