Puberty Periods Year 7. All About Menstruation. Puberty and Periods Menstruation (a period) is a major stage of puberty in girls. 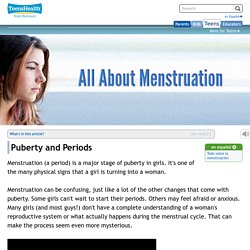 It's one of the many physical signs that a girl is turning into a woman. Menstruation can be confusing, just like a lot of the other changes that come with puberty. Some girls can't wait to start their periods. Others may feel afraid or anxious. Girls usually start to go through puberty between the ages of 8 and 13. About 6 months or so before getting her first period, a girl might notice an increased amount of clear vaginal discharge. When a girl first gets her period, doctors call it menarche menarche . The Female Reproductive System Baby girls are born with ovaries, fallopian tubes, and a uterus. The Female Reproductive System The female reproductive system includes a group of organs in a woman's lower belly and pelvis. Uterus The uterus is where a fetus, or baby, grows. Ovaries There are two ovaries, one on either side of the uterus.

The ovaries release an egg as part of a woman's cycle. Fallopian Tubes Cervix. GCSE Bitesize Science - The menstrual cycle and fertilisation : Revision. The Pink Locker Society. Problem periods. What is Puberty? Decoding Puberty in Girls. Puberty Periods Year 7. What does the Resurrection symbolise for Christian believers? Blog Post: "Sermon: Jesus' Death & The End of the World" Christian Bible Reference Site. The Life of Jesus—From His Birth to His Death. The angel Gabriel was sent to a fine young woman named Mary. 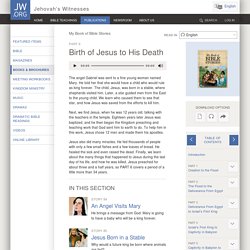 He told her that she would have a child who would rule as king forever. The child, Jesus, was born in a stable, where shepherds visited him. Later, a star guided men from the East to the young child. We learn who caused them to see that star, and how Jesus was saved from the efforts to kill him. Next, we find Jesus, when he was 12 years old, talking with the teachers in the temple. Jesus also did many miracles. After the Arrest of Jesus - These are the events that followed.... The Death of Jesus. LOOK at the terrible thing that is happening! 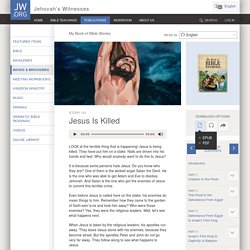 Jesus is being killed. They have put him on a stake. Nails are driven into his hands and feet. Why would anybody want to do this to Jesus? It is because some persons hate Jesus. Even before Jesus is nailed here on the stake, his enemies do mean things to him. When Jesus is taken by the religious leaders, his apostles run away. The priests take Jesus to the old man Anʹnas, who used to be the high priest.

Here at the house of Caʹia·phas they have a trial. While all of this is going on, Peter is outside in the yard. ‘No, I wasn’t!’ Three times people say to Peter that he was with Jesus. As the sun starts to come up on Friday morning, the priests take Jesus to their big meeting place, the Sanʹhe·drin hall. ‘This is a bad man,’ the priests tell Pilate. Pilate wants to let Jesus go. Early Friday afternoon Jesus is nailed to a stake. Isn’t that a wonderful promise? Resourcebox. The Plot to Kill Jesus 26When Jesus had finished saying all these things, he said to his disciples, 2‘You know that after two days the Passover is coming, and the Son of Man will be handed over to be crucified.’ 3 Then the chief priests and the elders of the people gathered in the palace of the high priest, who was called Caiaphas, 4and they conspired to arrest Jesus by stealth and kill him. 5But they said, ‘Not during the festival, or there may be a riot among the people.’ 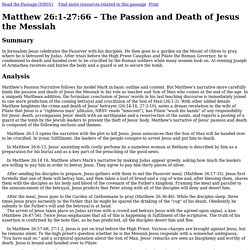 The Anointing at Bethany 6 Now while Jesus was at Bethany in the house of Simon the leper,*7a woman came to him with an alabaster jar of very costly ointment, and she poured it on his head as he sat at the table. 8But when the disciples saw it, they were angry and said, ‘Why this waste? 9For this ointment could have been sold for a large sum, and the money given to the poor.’ 10But Jesus, aware of this, said to them, ‘Why do you trouble the woman? Matthew 27:32-56 - The Crucifixion of Jesus - As they were. The Crucifixion - Children's Bible Stories. Animated The Easter Story. Jesus Christ: Anime of His Last Day. Religions - Christianity: The Passion of Christ.