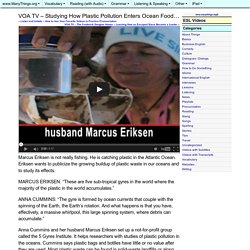 He is catching plastic in the Atlantic Ocean. Eriksen wants to publicize the growing buildup of plastic waste in our oceans and to study its effects. MARCUS ERIKSEN: “These are five sub-tropical gyres in the world where the majority of the plastic in the world accumulates.” ANNA CUMMINS: “The gyre is formed by ocean currents that couple with the spinning of the Earth, the Earth’s rotation. And what happens is that you have, effectively, a massive whirlpool, this large spinning system, where debris can accumulate.” VOA TV – Technology to Help Drivers Avoid Accidents. Wayne Irving drove across the United States to tell people about the dangers of sending text messages while driving. 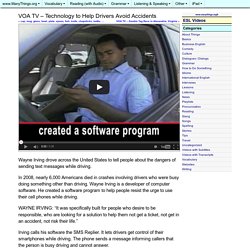 In 2008, nearly 6,000 Americans died in crashes involving drivers who were busy doing something other than driving. Wayne Irving is a developer of computer software. He created a software program to help people resist the urge to use their cell phones while driving. WAYNE IRVING: “It was specifically built for people who desire to be responsible, who are looking for a solution to help them not get a ticket, not get in an accident, not risk their life.” Irving calls his software the SMS Replier. VOA – Researchers Tell Cell Phone Users to Be Careful.

They are the symbols of our times — cell phones. 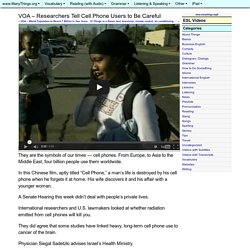 From Europe, to Asia to the Middle East, four billion people use them worldwide. In this Chinese film, aptly titled “Cell Phone,” a man’s life is destroyed by his cell phone when he forgets it at home. His wife discovers it and his affair with a younger woman. A Senate Hearing this week didn’t deal with people’s private lives. International researchers and U.S. lawmakers looked at whether radiation emitted from cell phones will kill you. They did agree that some studies have linked heavy, long-term cell phone use to cancer of the brain. Physician Siegal Sadetzki advises Israel’s Health Ministry. VOA – World Population to Reach 7 Billion in Two Years. Despite lower fertility rates in developed countries, the world’s population continues to grow, mostly in the planet’s poorest countries. 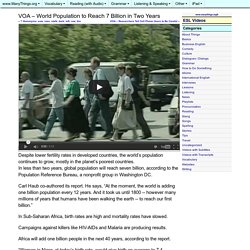 In less than two years, global population will reach seven billion, according to the Population Reference Bureau, a nonprofit group in Washington DC. Carl Haub co-authored its report. He says, “At the moment, the world is adding one billion population every 12 years. And it took us until 1800 -- however many millions of years that humans have been walking the earth -- to reach our first billion.” In Sub-Saharan Africa, birth rates are high and mortality rates have slowed. Campaigns against killers like HIV-AIDs and Malaria are producing results. Africa will add one billion people in the next 40 years, according to the report.

Life-long Beatles fans, they are looking forward to their next gig (concert). They’ll perform at a local record store in honor of the release of the new digitally re-mastered Beatles catalogue, the complete Beatles collection. VOA – Astronaut Armstrong Remembers Historic Apollo 11 Mission. Apollo 11 Mission Commander Neil Armstrong will forever be remembered for setting foot on the moon and uttering the immortal words: “One small step for man, one giant leap for mankind.” 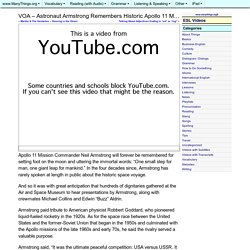 In the four decades since, Armstrong has rarely spoken at length in public about the historic space voyage. And so it was with great anticipation that hundreds of dignitaries gathered at the Air and Space Museum to hear presentations by Armstrong, along with crewmates Michael Collins and Edwin “Buzz” Aldrin. VOA – Video Games Are New Teaching Tools. Sixteen-year-old John Diaz is a typical teenager. 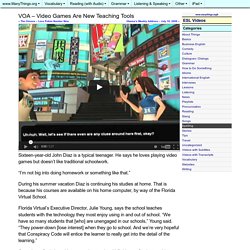 He says he loves playing video games but doesn’t like traditional schoolwork. “I’m not big into doing homework or something like that.” During his summer vacation Diaz is continuing his studies at home. That is because his courses are available on his home computer, by way of the Florida Virtual School. Florida Virtual’s Executive Director, Julie Young, says the school teaches students with the technology they most enjoy using in and out of school. Conspiracy Code is a video game that teaches U.S. history.

John Diaz says he enjoys American history now. The game is jointly developed by the virtual school and these computer programmers from an educational software company [called 360ED]. During training sessions, staff at the Florida Virtual School are shown how to integrate video games into lessons. Talking Business with Linda Yueh (07/12/13) Entrepreneurship in the UK. VOA TV – More Young Women Find a Calling in Catholic Orde. The Dominican Sisters of St. 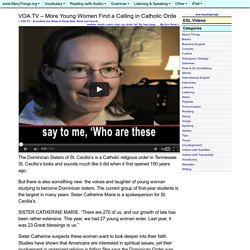