Why has Goa decided the coconut palm is no longer a tree? Image copyright Frederick Noronha Authorities in India's Goa state recently said the region's iconic and much loved coconut palm would no longer be regarded as a tree, but a plant. 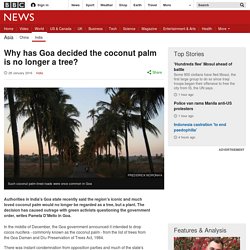 The decision has caused outrage with green activists questioning the government order, writes Pamela D'Mello in Goa. The health benefits of... coconut oil. Coconut oil comes from the meat of matured coconuts harvested from the coconut palm tree. 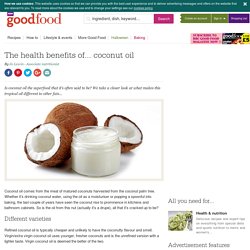 Whether it’s drinking coconut water, using the oil as a moisturiser or popping a spoonful into baking, the last couple of years have seen the coconut rise to prominence in kitchens and bathroom cabinets. So is the oil from this nut (actually it’s a drupe), all that it’s cracked up to be? Different varieties Refined coconut oil is typically cheaper and unlikely to have the coconutty flavour and smell. Virgin/extra virgin coconut oil uses younger, fresher coconuts and is the unrefined version with a lighter taste. Nutritional highlights There is little substantial research into the health benefits of consuming coconut oil over other fats. When margarine/spreads shot to fame, manufacturers were seeking oil that was solid at room temperature and so to achieve this, they used the process of hydrogenation. 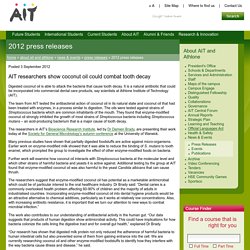 It is a natural antibiotic that could be incorporated into commercial dental care products, say scientists at Athlone Institute of Technology (AIT). The team from AIT tested the antibacterial action of coconut oil in its natural state and coconut oil that had been treated with enzymes, in a process similar to digestion. The oils were tested against strains of Streptococcus bacteria which are common inhabitants of the mouth. They found that enzyme-modified coconut oil strongly inhibited the growth of most strains of Streptococcus bacteria including Streptococcus mutans – an acid-producing bacterium that is a major cause of tooth decay. The researchers in AIT’s Bioscience Research Institute, led by Dr Damien Brady, are presenting their work today at the Society for General Microbiology’s autumn conference at the University of Warwick. « Back to News Listing. New Study: Coconut Oil Better Than Toothpase. Coconut oil, from the research I have done, is by far the best of the best. 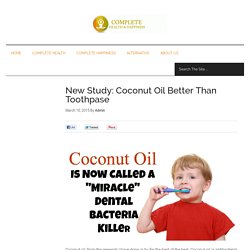 Coconut oil is antibacterial, antimicrobial, and antifungal! Studies have shown that coconut oil destroys the bacteria that can cause tooth decay. It is absolutely amazing that just one spoonful of coconut oil can clean your teeth and help prevent tooth decay more effectively than brushing your teeth or rinse the mouth with any brand of mouthwash and fluoride without any side effects as well. Coconut Oil Benefits: When Fat Is Good For You. You’ve no doubt noticed that for about the last 60 years, the majority of health care officials and the media have been telling you saturated fats are bad for your health and lead to a host of negative consequences, including high cholesterol, obesity, heart disease and Alzheimer’s disease. 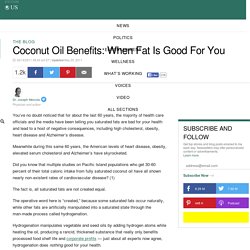 Meanwhile during this same 60 years, the American levels of heart disease, obesity, elevated serum cholesterol and Alzheimer’s have skyrocketed. Did you know that multiple studies on Pacific Island populations who get 30-60 percent of their total caloric intake from fully saturated coconut oil have all shown nearly non-existent rates of cardiovascular disease? (1) The fact is, all saturated fats are not created equal.

The operative word here is “created,” because some saturated fats occur naturally, while other fats are artificially manipulated into a saturated state through the man-made process called hydrogenation. Cocoa butter equivalent: The future of chocolate? When demand for a commodity outstrips its supply, manufacturers must look for alternative ingredients to substitute into their products in order to maintain profit margins. 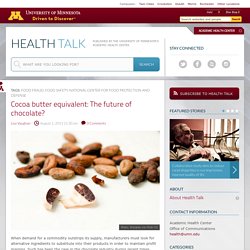 Such has been the case in the chocolate industry during recent times. The global cocoa deficit this year is expected to widen to 47,000 metric tons as diseases and replacement crops are leading to meager cocoa yields in Indonesia, Asia’s primary cocoa producing country. Although there are reportedly sufficient market stocks for the remainder of the year, the increasing gap between global appetite and chocolate resources is causing cocoa price projections to continue to rise.

Fear not, chocolate lovers, for there’s a new ingredient in town. While cocoa butter has historically been preferred over cocoa butter equivalent (CBE) as a fat source in chocolate products, in the coming years the balance is projected to shift in favor of CBEs. Skip the Shea Butter: Coconut Oil is the Health Product of the Future - The Pan-African Alliance.

I know quite a few members of the community who buy, sell, and use Shea butter daily – and not just for cosmetic purposes. 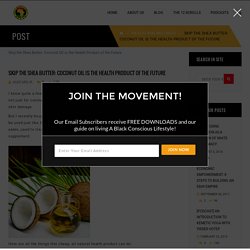 Shea is a decent treatment for medical skin conditions and skin damage. But I recently bought a jar of coconut oil, and I haven’t stopped using it since. Coconut oil can be used just like Shea butter (in dreadlocks or natural hair, as lotion, etc), but can also be eaten, used to treat acne, used to cure fungus, used as shaving cream, and as a health supplement.