EM's Pop Single Say What You Mean Will be a Crowd Pleaser in Any Spotify Playlist - purpledarts's blog. Get your pop playlists ready, we have a new favorite coming your way! 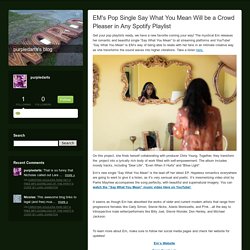 The mystical Em releases her romantic and beautiful single “Say What You Mean” to all streaming platforms and YouTube! “Say What You Mean” is EM’s way of being able to relate with her fans in an intimate creative way as she transforms the sound waves into higher vibrations. Take a listen here. On this project, she finds herself collaborating with producer Chris Young. Together, they transform the project into a lyrically rich body of work filled with self-empowerment.

Breaking Through the Music Pop Scene, EM’s Single, “Say What You Mean” is Now Streaming on Spotify!

Japanese World Music Artist Kitaro Presents his Exhilarating “Kojiki and The Universe” Tour to Los Angeles, Nov 17. Japanese Artist Kitaro Presents Spiritual Song and Dance, Nov. 16 in La Jolla. World Music Artist Kitaro Brings His Masterful Production Of Sight And Sound To Portland, OR. FindTheBestMusic: Jan Daley’s New Smooth Jazz Album The Way Of A Woman Is A Knockout. Watch The New Video For Rhett May’s Song Creatures of the Night On YouTube. Rhett May has released the new music video for the title track off his newest album, “Creatures of the Night”. 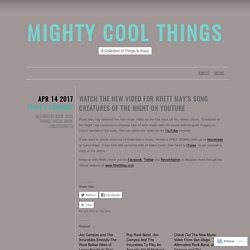 He continues to impress fans of rock music with his sound and the great imagery to match the feel of the song. You can watch the video on his YouTube channel. If you want to check more out of Rhett May’s music, he has a FREE DOWNLOAD up on Noisetrade of “Lexxi May”. If you love end up loving both of these tunes, then head to iTunes to get yourself a copy of the album. FindTheBestMusic: Geoff Alpert Releases Incredible Jazz Album Open Your Heart. Geoff Alpert’s new Jazz Fusion album “Open Your Heart” is a terrific collection of ten tunes that takes musical ideas and influences from not only the jazz universe but also funk, rhythm and blues, pop and Latin music. 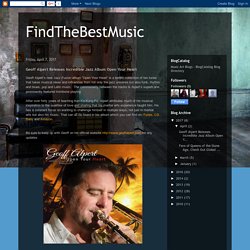 The commonality between the tracks is Alpert’s superb and prominently featured trombone playing. After over forty years of teaching Ken-Ka-Kung-Fu, Alpert attributes much of his musical inspiration to the qualities of love and sharing that his martial arts experience taught him. He has a constant focus on wanting to challenge himself in multiple ways, not just in martial arts but also his music. That can all be heard in his album which you can find on iTunes, CD Baby and Amazon. Jan Daleys Spectacular When Sunny Gets Blue Video. Jan Daley’s single “When Sunny Gets Blue” is set to a beautiful video produced by Jon Burk. 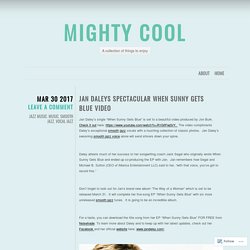 Check it out here: The video compliments Daley’s exceptional smooth jazz vocals with a touching collection of classic photos. Jan Daley’s swooning smooth jazz voice alone will send shivers down your spine. Daley attests much of her success to her songwriting coach Jack Segal who originally wrote When Sunny Gets Blue and ended up co-producing the EP with Jan. Jan remembers how Segal and Michael B.

Sutton (CEO of iMerica Entertainment LLC) said to her, “with that voice, you’ve got to record this.” Jon Campos and The Incurables Embody The Rock Ballad Vibes of Lenny Kravitz In Their Song, Tragic Tales and Lullabies. Love a classic Lenny Kravitz rock ballad? 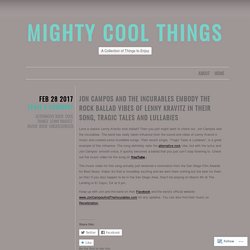 Then you just might want to check out Jon Campos and the Incurables. The band has really taken influence from the sound and vibes of Lenny Kravitz’s music and created some incredible songs. Their recent single, “Tragic Tales & Lullabies”, is a great example of this influence. The song definitely nails the alternative rock vibe, but with the lyrics and Jon Campos’ smooth voice, it quickly becomes a ballad that you just can’t stop listening to. Frank Zappa Fans Be Sure To Give A Listen To The New Single From Deep Touch On Spotify. If you love the experimental sounds from Frank Zappa, then you might want to check out Deep Touch. 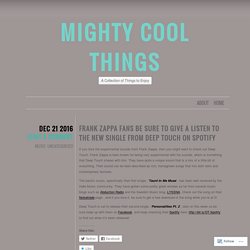 Frank Zappa is best known for being very experimental with his sounds, which is something that Deep Touch shares with him. They have quite a unique sound that is a mix of a little bit of everything. Their sound can be best described as rich, homegrown songs that mix both retro and contemporary textures. If You Love Josh Grobans Christmas Album, You Will Love Jan Daleys There’s Nothing Like Christmas. Who doesn’t love Josh Groban’s Christmas Album? 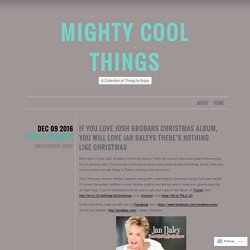 With his smooth voice and great instrumentals, it’s no question why. If you’ve got a kicking for some more amazing jazz Christmas songs, then you need to check out Jan Daley’s There’s Nothing Like Christmas. You’ll find your favorite Holiday classics along with a few original Christmas songs from Jan herself. An Inside Look Of The Life Of A Beach Boy As Narrated By Mike Love; Perfect Read For This Holiday Season. In the book “Good Vibrations: My Life As A Beach Boy” (or in the audiobook by the same name which Mike narrates), Mike Love tells his own story for the first time, of how a sheet-metal apprentice became the quintessential front man for America’s most successful rock band, singing in more than 5,600 concerts in 26 countries. 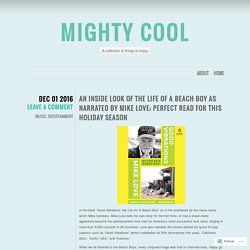 Love also narrates the stories behind his lyrics for pop classics such as “Good Vibrations” (which celebrates its 50th anniversary this year), “California Girls,” “Surfin’ USA,” and “Kokomo.” When we all listened to the Beach Boys, every conjured image was that of charmed lives, happy go lucky existence, carefree life, beaches and sunshine. Mike’s journey was for the most part happy, but the challenges that came along with the Beach Boys fame was not always so. 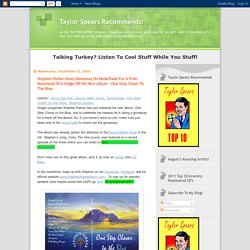 So, if you haven’t done so yet, make sure you head over to his NoiseTrade to check out the giveaway! The album has already gotten the attention of the Deuce Radio Show in the . Stephen’s song, Carry The One (Love), was featured on a recent episode of the show which you can listen to here: Up And Coming Indie Artist Shane Burke Releases New Album Now Available On iTunes. Country Artist Sammy Sadler Keeps Moving Up The HotDisc Top 40 Chart With His New Single. Indie Band The Elizabeth Kill Releases New Video on YouTube. LA rock native The Elizabeth Kill release their new alt rock single “Criminal” on YouTube. 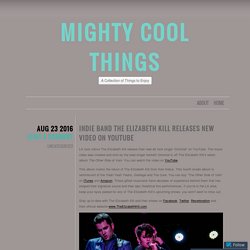 The music video was created and shot by the lead singer herself! Criminal is off The Elizabeth Kill’s latest album The Other Side of Vain. You can watch the video on YouTube. This album marks the return of The Elizabeth Kill from their hiatus. This fourth studio album is reminiscent of the Yeah Yeah Yeahs, Garbage and The Cure. Stay up to date with The Elizabeth Kill and their shows on Facebook, Twitter, Reverbnation and their official website www.TheElizabethKill.com. Taylor Spears Recommends!: Australian Blues Band, Stormcellar, Is Set To Play At Ruby L'otel in Rozelle, Australia This Sunday. American Influenced Album From Italian Pop Rock Band The General Brothers -FREE DOWNLOAD - purpledarts's blog. From Naples, Italy, the five piece band The General Brothers recently released a video for their song “Bye Bye Baby” on their YouTube page here.

The band recently released their self-titled debut (all songs in English) available for FREE DOWNLOAD – YES THE ENTIRE ALBUM IS FREE, here. The album features seven tracks of original English spoken music written by the band’s lead singer Angelo Esposito. Before adding the rest of the band’s lineup, Esposito started the band as an acoustic duo with his brother Andrea until they later decided to go for a more developed sound. They are influenced by a variety of genres from folk and rhythm and blues all the way to electronic and funk. Their unique sound and passion shine through in their music and performances.

Pistol Annies have always been one of my favorite country music groups and new artist Maddie Logan just covered their hit song “Hell on Heels” on her YouTube channel. Maddie is a break out country pop artist who also just came out with a new self-titled EP. It features her latest single to hit the radio airwaves, “Breakup Survival Guide,” on top of the two other catchy songs that remind me a lot of Carrie Underwood or Taylor Swift when she was Maddie’s age. Go Out On Aprils Fools and See Soulful Musician Shane Burke in Fort Collins At The Ace Gallery. World Music Flutist Wouter Kellerman Has Been Nominated For The 58th Annual Grammy Awards. The New Album By Grammy Award Winning Flutist Wouter Kellerman Is Taking Listeners By Storm - purpledarts. Grammy Award winning flutist, Wouter Kellerman, has released a fantastic new album.

In 2015 Wouter Kellerman won a Grammy for Best New Age Album for “Winds Of Samsara”. Now, Wouter Kellerman is back with a new album and it is even better than Winds Of Samsara. “Love Language”, his newest release, debuted at #1 on the World Music Billboard charts in its first week. ‘Love Language’ was influenced by his experiences in Senegal, Spain, Cuba, India, Greece and the United States. This album encapsulates the myriad ways that people connect on the topics of life and love — and the countless languages with which people speak of the universal connection that binds them one to another.

With his experience in classical music, Kellerman focuses his attention on world music, exploring the versatility of the flute and fusing classical and contemporary sounds. Dlab Audio Recording Studio Is The Perfect Place To Get Your Artists Creative Vision To Become A Reality - purpledarts's blog. Your Favorite Youtube Star Alex Boye Is Headed To Spokane To Perform His Original African Music. Pro Cannabis Country Singer Matthew Human Releases Music Video For Heartfelt New Song. Classic Rock Star Rhett May Has A Story To Tell In His New Song The Violence Of Ice.

A beat that gets you moving, a guitar line you won’t soon forget and lyrics with an edge are what you can expect when May shows up to play. The video will certainly get your attention, with a flashy sense of visuals overlaid by mind-warping effects that could only come from the songs 70’s inspiration. A songwriter who draws on life experiences to create a musical style all his own; May delivers on the goods and you won’t be disappointed. Oleg Frish: Russian Singer Oleg Frish Sings Duet With Iconic Pop Music Performer Tony Orlando. Top Indie Rock Duo The Bergamot Brings A New World Sound That Feist Fans Have Been Looking For. Rising Star and Pop Music Icon Grace Valerie Will Have You Dancing All Night Long To The Beat Of Her Music. Top-40 Dance Music Artist Grace Valerie Will Perform At The Be-Fashionable Fashion Show Fundraiser.