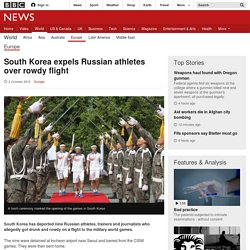 The nine were detained at Incheon airport near Seoul and barred from the CISM games. They were then sent home. Police said the group - five men and four women - protested noisily and blocked an aisle after Korean Air cabin crew refused them more alcohol. CISM, in Mungyeong this year, is the world's biggest military sports event. Rear Admiral Michael van Balen. Rear Admiral van Balen, AO, RAN joined the RAN as a Junior Entry Cadet Midshipman in 1978. 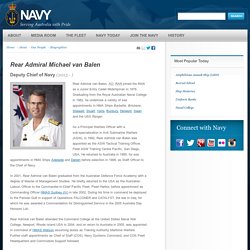 Graduating from the Royal Australian Naval College in 1982, he undertook a variety of sea appointments in HMA Ships Barbette, Brisbane, Stalwart, Stuart, Yarra, Bunbury, Derwent, Swan and the USS Ranger. As a Principal Warfare Officer with a sub-specialisation in Anti Submarine Warfare (ASW), in 1992, Rear Admiral van Balen was appointed as the ASW Tactical Training Officer, Fleet ASW Training Centre Pacific, San Diego, USA. He returned to Australia in 1995, for sea appointments in HMA Ships Adelaide and Darwin before selection in 1998, as Staff Officer to the Chief of Navy. In 2001, Rear Admiral van Balen graduated from the Australian Defence Force Academy with a degree of Master of Management Studies. Military history of Australia during the Vietnam War.

The withdrawal of Australia's forces from South Vietnam began in November 1970 when 8 RAR completed its tour of duty and was not replaced. 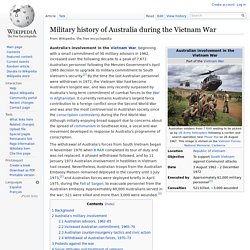 A phased withdrawal followed, and by 11 January 1973 Australian involvement in hostilities in Vietnam had ceased. Nevertheless, Australian troops from the Australian Embassy Platoon remained deployed in the country until 1 July 1973,[2] and Australian forces were deployed briefly in April 1975, during the Fall of Saigon, to evacuate personnel from the Australian embassy. Approximately 60,000 Australians served in the war; 521 were killed and more than 3,000 were wounded.[3] Background[edit] Main article: Vietnam War.

Gulf War. The Gulf War (2 August 1990 – 28 February 1991), codenamed Operation Desert Shield (2 August 1990 – 17 January 1991), for operations leading to the buildup of troops and defense of Saudi Arabia and Operation Desert Storm (17 January 1991 – 28 February 1991) in its combat phase, was a war waged by coalition forces from 34 nations led by the United States against Iraq in response to Iraq's invasion and annexation of Kuwait. 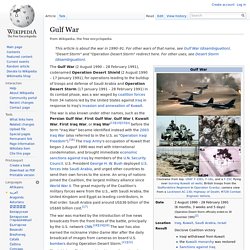 The war is also known under other names, such as the Persian Gulf War, First Gulf War, Gulf War I, Kuwait War, First Iraq War, or Iraq War[13][14][15][a] before the term "Iraq War" became identified instead with the 2003 Iraq War (also referred to in the U.S. as "Operation Iraqi Freedom").[16] The Iraqi Army's occupation of Kuwait that began 2 August 1990 was met with international condemnation, and brought immediate economic sanctions against Iraq by members of the U.N. Security Council. NZ navy barred from boarding boats in fishing stand-off. 14 January 2015Last updated at 03:32 ET The New Zealand navy released what it said was photographic evidence of illegal fishing The New Zealand navy is engaged in a stand-off with two boats thought to be illegally fishing toothfish in the Southern Ocean. 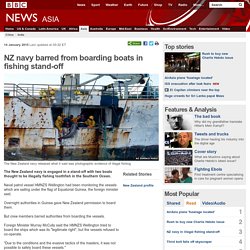 Naval patrol vessel HMNZS Wellington had been monitoring the vessels which are sailing under the flag of Equatorial Guinea, the foreign minister said. Overnight authorities in Guinea gave New Zealand permission to board them. But crew members barred authorities from boarding the vessels. Foreign Minister Murray McCully said the HMNZS Wellington tried to board the ships which was its "legitimate right", but the vessels refused to co-operate. "Due to the conditions and the evasive tactics of the masters, it was not possible to safely board these vessels. " The HMNZS Wellington (left) has been monitoring the fishing vessels The area is protected and regulated - only certain countries are allowed to fish here. 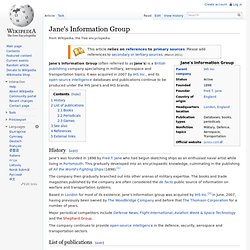 It was acquired in 2007 by IHS Inc., and its open-source intelligence databases and publications continue to be produced under the IHS Jane's and IHS brands. History[edit] Jane's was founded in 1898 by Fred T. Jane who had begun sketching ships as an enthusiast naval artist while living in Portsmouth. This gradually developed into an encyclopaedic knowledge, culminating in the publishing of All the World's Fighting Ships (1898).[1] The company then gradually branched out into other arenas of military expertise. Based in London for most of its existence, Jane's Information group was acquired by IHS Inc.[2] in June, 2007, having previously been owned by The Woodbridge Company and before that The Thomson Corporation for a number of years. List of publications[edit] Books[edit] (annual) Asia Pacific Defence Reporter. Defence Review Asia. Australian Defence: Latest defence industry news, events and special reports. The Australian Strategic Policy Institute Blog.