Download Audio Books, iPod And Digital Audio Books. The Army, my family - Earshot. An operational deployment overseas is a career highlight for many soldiers, who go on to form unbreakable bonds of friendship with those they serve with. 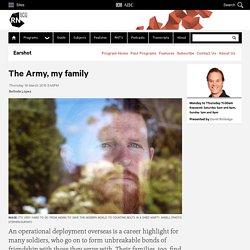 Their families, too, find themselves part of the Army community—for better or for worse. Belinda Lopez reports as part of the Retrospect project. Corporal Martin Ansell needed to speak to his family. Three Australian soldiers had just been killed in a green-on-blue incident; an Afghan National Army sergeant had opened fire after a morning parade. Ten others were wounded. It was early November 2011, and Marty—as he’s known to family and friends—was on his second deployment to Afghanistan. Not only were they grieving for the boys … but they were also then grieving because the boys that they were used to being around were not there, they were all off on leave with their families. Looking at his wife and mother on screen, he could see the faces of women bearing the stress of war. High rates of divorce The Army family rallies. How do relationships affect brain function? - Life Matters. Philosophy in schools - The Philosopher's Zone.

Alan Saunders: Hello, and welcome to The Philosopher's Zone. 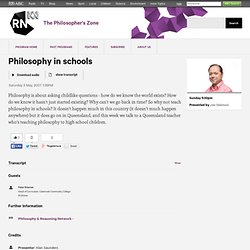 I'm Alan Saunders. Philosophy is normally taught to 20-somethings in universities. That was how I started. But should we begin earlier? Should it be taught in schools? Well, shortly we're going to talk to somebody who does teach philosophy in school. Jenevieve Chang and the last fan dance - 360documentaries. In a tale that spans three generations, Jenevieve Chang unearths the story of her grandparents, whose lives were turned upside down when they fled China in 1949. 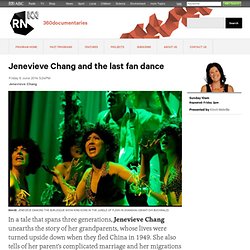 The Fresh Air Interview. Podcast Directory. Faith, reason and Christianity - Encounter. Richard Dawkins and his atheist disciples argue that religion is fundamentally irrational and holding humanity back from its full potential. 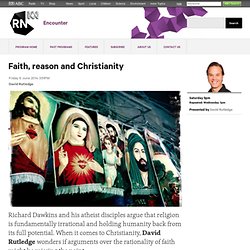 When it comes to Christianity, David Rutledge wonders if arguments over the rationality of faith might be missing the point. Since Richard Dawkins published The God Delusion in 2006, it’s become routine for recreational atheists to pit faith against reason. Religion is dangerous, they say, because it’s fundamentally irrational, and religious people are silly because they arrange their ethics and their politics according to the teachings of an ancient book full of nonsensical tales. Yet today, the ‘neo-atheist’ push is somewhat running out of steam. Religion, it seems, is not about to be ridiculed out of existence, and there’s only so much mileage you can get out of jokes about the Flying Spaghetti Monster. A lot of contemporary atheism has swallowed some Enlightenment nonsense about humanity’s intrinsic goodness.

Read more: A.C. The secrets behind Australia’s most enduring architecture - By Design. Open-plan living and the blurring of the inside and outside are design styles that have changed the way we live in Australia. 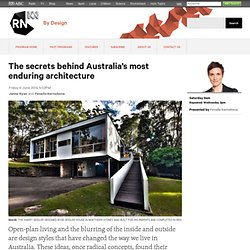 These ideas, once radical concepts, found their origins in the early designs of Australian architects Harry Seidler and Robin Boyd, as Janne Ryan and Fenella Kernebone write. While nearly every house now built or renovated in Australia features ‘open-plan living’, this concept was new in Australia until the mid-20th century. It wasn’t until Melbourne-based Robin Boyd’s 1958 family home and Sydney-based Harry Seidler’s Rose Seidler House were built that this new way of living found traction in Australia. There’s blurriness between the interior of the house and the landscape. They are all the one thing within this urban shell. Guests - List of Conversations guests - ABC Conversations with Richard Fidler. Richard Herring's Leicester Square Theatre Podcast - Podcasts. Science Weekly podcast: why we should leave fossil fuels in the ground. This week saw the publication of a landmark IPCC report which concluded that a global rollout of clean energy was both affordable and would shave only a tiny fraction off economic growth. 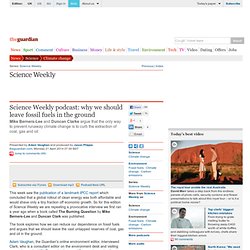 So for this edition of Science Weekly we are repeating a provocative interview we first ran a year ago when a book called The Burning Question by Mike Berners-Lee and Duncan Clark was published. The book explores how we can reduce our dependence on fossil fuels and argues that we should leave the vast untapped reserves of coal, gas and oil in the ground. Adam Vaughan, the Guardian's online environment editor, interviewed Clark, who is a consultant editor on the environment desk and visiting researcher at the UCL Energy Institute, and Berners-Lee, a leading expert on carbon emissions and the author of How Bad Are Bananas? The Carbon Footprint of Everything. To buy a copy of The Burning Question, click here. TED Radio Hour. All Things Considered. All Things Considered. All Things Considered (ATC) is the flagship news program on the American network National Public Radio. 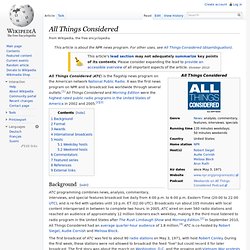 It was the first news program on NPR and is broadcast live worldwide through several outlets.[1] All Things Considered and Morning Edition were the highest rated public radio programs in the United States of America in 2002 and 2005.[2][3] Background[edit] ATC programming combines news, analysis, commentary, interviews, and special features broadcast live daily from 4:00 p.m. to 6:00 p.m. Eastern Time (20:00 to 22:00 UTC), and is re-fed with updates until 10 p.m. ET (02:00 UTC). BBC Radio 4 - Woman's Hour - Woman's Hour Power List. BBC Radio 4 - All in the Mind, Alzheimer's Disease , Alzheimer’s Disease. BBC Radio 4 - All in the Mind, Alzheimer's Disease. Podcasts and Downloads.