The World's 10 Most Beautiful Buildings  Palau de la Música Catalana; Barcelona, Spain, Photo credit: kkmarais via Flickr Does the sight of a really incredibly façade make you weak in the knees? 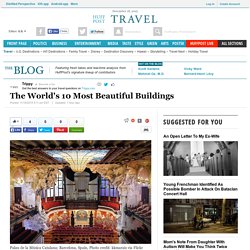 Does a breathtaking interior make your heart flutter? Do you stay up at night thinking about architectural details? Inge Morath. Jean Seberg. Foster and Partners. Foster + Partners is a British international studio for architecture and integrated design, with headquarters in London. 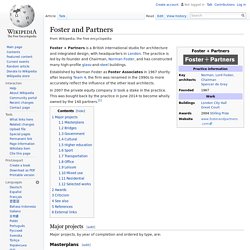 The practice is led by its founder and Chairman, Norman Foster, and has constructed many high-profile glass-and-steel buildings. Established by Norman Foster as Foster Associates in 1967 shortly after leaving Team 4, the firm was renamed in the 1990s to more accurately reflect the influence of the other lead architects. In 2007 the private equity company 3i took a stake in the practice. This was bought back by the practice in June 2014 to become wholly owned by the 140 partners.[1] Major projects[edit] 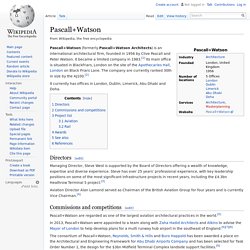 It became a limited company in 1983.[1] Its main office is situated in Blackfriars, London on the site of the Apothecaries Hall, London on Black Friars Lane. The company are currently ranked 30th in size by the AJ100.[2] It currently has offices in London, Dublin, Limerick, Abu Dhabi and Doha. Arup Group Limited. Arup (officially Arup Group Limited) is a British multinational professional services firm headquartered in London, UK which provides engineering, design, planning, project management and consulting services for all aspects of the built environment. 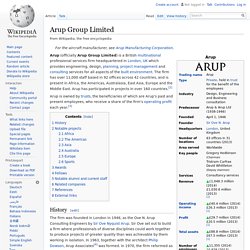 The firm has over 11,000 staff based in 92 offices across 42 countries, and is present in Africa, the Americas, Australasia, East Asia, Europe and the Middle East. Arup has participated in projects in over 160 countries.[2] Rem Koolhaas. Remment Lucas "Rem" Koolhaas (Dutch pronunciation: [rɛm koːlɦaːs]; born 17 November 1944) is a Dutch architect, architectural theorist, urbanist and Professor in Practice of Architecture and Urban Design at the Graduate School of Design at Harvard University. 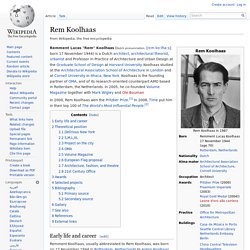 Koolhaas studied at the Architectural Association School of Architecture in London and at Cornell University in Ithaca, New York. Koolhaas is the founding partner of OMA, and of its research-oriented counterpart AMO based in Rotterdam, the Netherlands. In 2005, he co-founded Volume Magazine together with Mark Wigley and Ole Bouman. Piet Blom. The Cube Houses in Rotterdam. 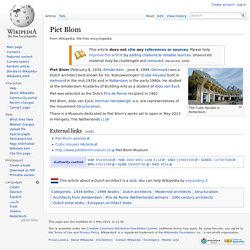 Piet Blom (February 8, 1934, Amsterdam – June 8, 1999, Denmark) was a Dutch architect best known for his 'Kubuswoningen' (Cube houses) built in Helmond in the mid-1970s and in Rotterdam in the early 1980s. He studied at the Amsterdam Academy of Building-Arts as a student of Aldo van Eyck. Ben van Berkel. Ben van Berkel (born 1957) is a Dutch architect, working in the architectural practice UNStudio. 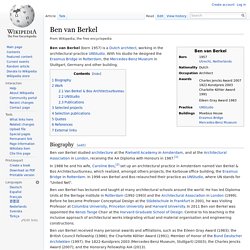 With his studio he designed the Erasmus Bridge in Rotterdam, the Mercedes-Benz Museum in Stuttgart, Germany and other building. Biography[edit] Ben van Berkel studied architecture at the Rietveld Academy in Amsterdam, and at the Architectural Association in London, receiving the AA Diploma with Honours in 1987.[1] In 1988 he and his wife, Caroline Bos,[2] set up an architectural practice in Amsterdam named Van Berkel & Bos Architectuurbureau, which realized, amongst others projects, the Karbouw office building, the Erasmus Bridge in Rotterdam. 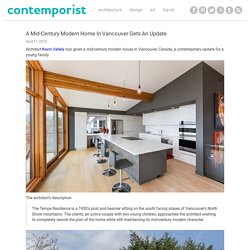 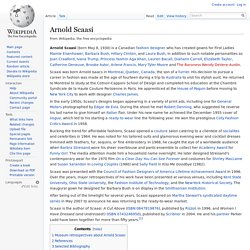 Scaasi was presented with the Council of Fashion Designers of America Lifetime Achievement Award in 1996. Over the years, major retrospectives of his work have been presented at various venues, including Kent State University, Ohio State University, the Fashion Institute of Technology, and the New-York Historical Society. The inaugural gown he designed for Barbara Bush is on display in the Smithsonian Institution. Scaasi is the author of Scaasi: A Cut Above (ISBN 0847819876), published by Rizzoli in 1996, and Women I Have Dressed (and Undressed!) References[edit] Hans Poelzig. Hans Poelzig (30 April 1869 – 14 June 1936) was a German architect, painter and set designer. 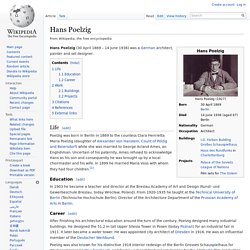 Life[edit] Poelzig was born in Berlin in 1869 to the countess Clara Henrietta Maria Poelzig (daughter of Alexander von Hanstein, Count of Pölzig and Beiersdorf) while she was married to George Acland Ames, an Englishman. Uncertain of his paternity, Ames refused to acknowledge Hans as his son and consequently he was brought up by a local choirmaster and his wife. In 1899 he married Maria Voss with whom they had four children.[1] Education[edit] Lupita nyong'o. Pettit+sevitt lowline b house st ives ken woolley. Blunt house pymble peter hirst. Cook house john james castle cove. Architecture bvn. "emma thompson" Buddhas of bamiyan. Megan gale. Shibuya crossing. David gandy.

Incredible Images of the Northern Lights  Here are some of the best images of the aurora borealis, captured in 2014. Close This brilliant image of the Northern Lights was taken on December 7, 2014 near Kleifarvatn in Iceland by Hafsteinn Robertson. This image of more subtle colors of the Northern Lights in Lake Kleifarvatn illuminated by the moon is a backdrop in a snowy landscape was taken on the peninsula of Reykjanes on December 2014 by Hafsteinn Roberson. 2014: My Year in Pictures. Take the Best Nighttime Photo of Your Life. Open spaces, like the Oregon desert, can be perfect spots for your star shots. Photo: Andy Best Great nighttime shots—the ones with crystal-clear stars and the Milky Way practically jumping off the screen—are always a big hit on Instagram.

But how do you capture one for yourself? You can’t just point your camera at the stars and hope to get lucky. A great starscape captures more than the eye can see, and you have to let the camera do the heavy lifting. Print T Shirts - La tienda barato Print T Shirts de Print T Shirts en China Proveedores en 3D Fashion Apparel Mall en Aliexpress.com. Paulina Porizkova. Early life[edit] Born in Prostějov, Czechoslovakia, Porizkova was a toddler when her parents fled Czechoslovakia to Lund, Sweden to escape the 1968 Warsaw Pact invasion. She was left in the care of her grandmother.[2] Czechoslovakian authorities would not allow her parents to reclaim her, and the ensuing battle was widely publicized in the Swedish press, making Porizkova a cause célèbre.[2]

Paulina Porizkova. Norman Foster, Baron Foster of Thames Bank. Norman Robert Foster, Lord Foster of Thames Bank, OM (born 1 June 1935) is an English architect whose company, Foster + Partners, maintains an international design practice famous for high-tech architecture. He is one of Britain's most prolific architects of his generation.[1] In 1999 he was awarded the Pritzker Architecture Prize, often referred to as the Nobel Prize of architecture.[2] In 2009 Foster was awarded the Prince of Asturias Award in the Arts category.

In 1994 he received the AIA Gold Medal. Biography[edit] Early life in Manchester[edit] David Redfern: his best shots from a life photographing musicians – gallery. Factory floors and sexual frustration: photographing the migrant worker’s life. “It is not men who migrate,” wrote John Berger in A Seventh Man, his provocative 1975 book on the condition of the migrant workers in Europe, “but machine minders, sweepers, diggers, cement mixers, cleaners, drillers etc. This is the significance of temporary migration. To rebecome a man (husband, father, citizen, patriot), a migrant has to return home. The home he left because it held no future for him.” This quote is the conceptual starting point for an intriguing new group show called Rebecoming at Flowers Gallery in east London, curated by Tim Clark, who edits the online magazine 1000 Words.