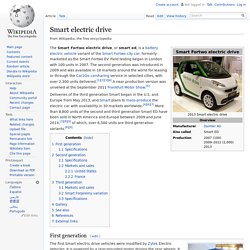 Field testing began in London with 100 units in 2007. The second generation was introduced in 2009 and was available in 18 markets around the world for leasing or through the Car2Go carsharing service in selected cities, with over 2,300 units delivered.[1][2][3][4] A near production version was unveiled at the September 2011 Frankfurt Motor Show.[5] First generation[edit] A Smart ED Police Car in central London. The first Smart electric drive vehicles were modified by Zytek Electric Vehicles. Field testing began in London with 100 vehicles in 2007[1] and was available only for lease to corporate clients for £375 per month.[10] Specifications[edit] Second generation[edit] The second generation was introduced in 2009 to 18 markets with the objective to gather experience about how customers use and charge electric vehicles. France[edit] Online Shop 2015 Hot Selling Creative Multifunctional 1.54 Inch TFT Capacitive Touch Screen Android 4.2.2 3G Smart Watch Phone Wristwatch. 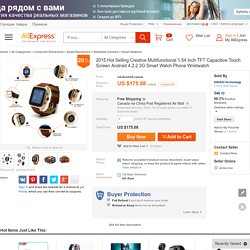 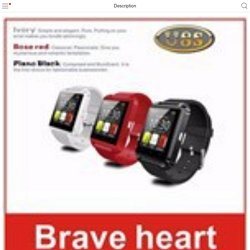 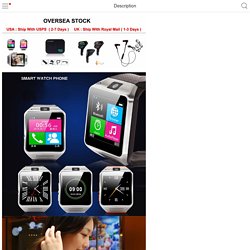 High brightness: Brightness degradation is less than 1‰ per 1,000 hours. Instant start, no flashing. Green Technology,safe and environment friendly. No UV/IR Radiation, and no heat radiation. Hot Sell Products Recommend Company & Warehouse Show We accept alipay, All major credit cards are accepted through secure payment processor ESCROW. Mobile - Global Online Shopping for Apparel, Phones, Computers, Electronics, Fashion and more. This is a new Bluetooth Smart U Watch U8 which is compatible with all Bluetooth V2.0 or above enabled smartphones, tablets and PCs (support Android 2.3 or above),such as Galaxy S3 S4 S5 Note 2 Note 3 etc. 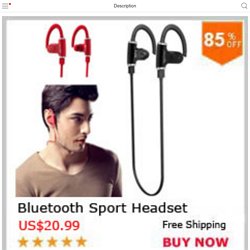 Features: *Dialer You can dial and answer the phone on the watch. What's more, the call log and phone book is available *Play music You can listen to music that is stored in the phone from U watch *Remote Capture Just press "confirm" on your watch to take shoots *Anti-lost The watch will shake alarm when it keeps away from phone for a certain distance *Barometer You can read the current atmospheric pressure altitude and the temperature *Altimeter You can watch the vertical height after set a initial height *Pedometer Calculating the walking distance of time and the number of kilometers after you setting the step and weight parameters. 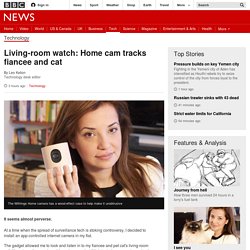 The 10 Best Things Coming This September. Noke is a Bluetooth padlock you unlock with your phone. Oh, the ‘ol padlock. 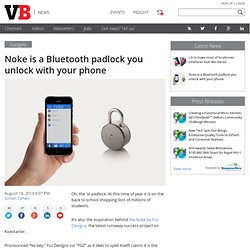 At this time of year it is on the back to school shopping lists of millions of students. It’s also the inspiration behind the Noke by Fuz Designs, the latest runaway success project on Kickstarter. Pronounced “No-key,” Fuz Designs (or “FŪZ” as it likes to spell itself) claims it is the “world’s first Bluetooth padlock.” That tingled my Spidey-sense; I had the nagging feeling I’d heard about another Kickstarter Bluetooth lock project a little while back. Sure enough, there was. VentureBeat spoke to Fuz Designs’ cofounder, Cameron Gibbs, to find out more about the Noke and how it compares to the Teo.

Paint the rainbow: the Scribble Pen that lets you draw in 16 million colours. Since the earliest version of MacPaint, launched in 1984, graphics software programmes have done their best to imitate real life, providing mini icons of pens, pencils and paint pots to show what these magic pixel-manipulators will do on your screens. 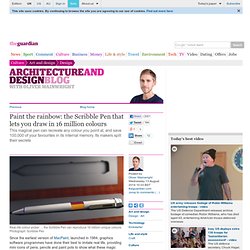 But now, in a process of barely credible technological sorcery, those software tools are feeding back into real life. You know the pipette icon that can reproduce any colour on your screen? Soon you’ll have one in your real-world pencil case. Launched this week on Kickstarter, the Scribble Pen is a real-life colour-picker that is capable of sampling then drawing in 16 million different shades, from something the size of your average felt-tip pen. Tap a tomato with one end of the magic wand, and moments later you can splurge out a stream of scarlet ink from the other. Lazer keyboard. DVD - Wear Them With Pride - Oberon Submarines. Tentsile tree tents. Jac Zagoory Designs - Beta Inkless Pen. The Beta Inkless pen ( by Axel ---German precision engineering) is a Bauhaus design to the max---form follows function! 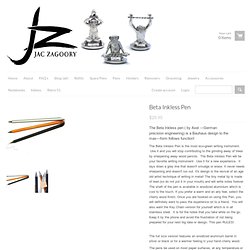 The Beta Inkless Pen is the most eco-green writing instrument. Use it and you will stop contributing to the grinding away of trees by sharpening away wood pencils. The Beta Inkless Pen will be your favorite writing instrument. Use it for a new experience. It lays down a grey line that doesn't smudge or erase. The full size version features an anodized aluminum barrel in silver or black or for a warmer feeling in your hand cherry wood.

Products – The Colossal Shop. Categories « Neo Jeans. Play With Ideas. Artefact Cards. Initially an experiment in a Smithery workshop, Artefact Cards have grown to become a business of its very own in 2014. 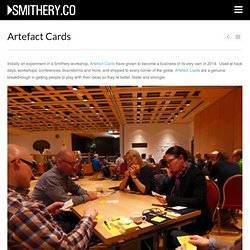 Used at hack days, workshops, conferences, brainstorms and more, and shipped to every corner of the globe, Artefact Cards are a genuine breakthrough in getting people to play with their ideas so they’re better, faster and stronger. This Inkless Pen Lets You Write Forever.