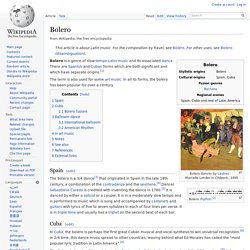 In all its forms, the bolero has been popular for over a century. Spain[edit] Cuba[edit] In Cuba, the bolero is perhaps the first great Cuban musical and vocal synthesis to win universal recognition.[6] In 2/4 time, this dance music spread to other countries, leaving behind what Ed Morales has called the "most popular lyric tradition in Latin America".[4] The Cuban bolero tradition originated in Santiago de Cuba in the last quarter of the 19th century;[7] it does not owe its origin to the Spanish music and song of the same name.[8] In the 19th century there grew up in Santiago de Cuba a group of itinerant musicians who moved around earning their living by singing and playing the guitar.

Sugar Ray — Every Morning — Listen and discover music at Last.fm. Deep Blue Something — Breakfast at Tiffany's — Listen and discover music at Last.fm. Tracks by Dragon — Free listening, videos, concerts, stats and pictures at Last.fm. I Never Liked You. Background[edit] Brown had switched publishers to the Montreal-based Drawn and Quarterly by the time he completed his first autobiographical graphic novel, The Playboy, in 1992. 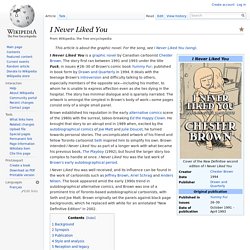 At first, he intended The Playboy and I Never Liked You to form one story, but found it too complex to handle when he started to plan it out. The Playboy deals with Brown's guilt over his teenage obsession with masturbating over pornography. The book gained praise from fans, critics, and other cartoonists, and won a Harvey Award. It received criticism from those who saw it as objectifying women and glorifying pornography; Playboy publisher Hugh Hefner wrote to Brown voicing concern that Brown would feel such guilt in a post-sexual revolution world. Synopsis[edit] The story is set during Brown's 1970s adolescence in Châteauguay, a suburb of Montreal. 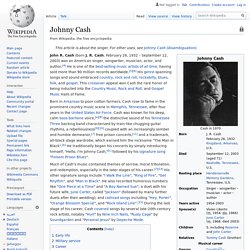 "Johnny" Cash (February 26, 1932 – September 12, 2003) was an American singer-songwriter, actor, and author,[2] widely considered one of the most influential musicians of the 20th century.[3] Although primarily remembered as a country music icon, his genre-spanning songs and sound embraced rock and roll, rockabilly, blues, folk, and gospel. This crossover appeal won Cash the rare honor of multiple inductions in the Country Music, Rock and Roll and Gospel Music Halls of Fame. Cash was known for his deep bass-baritone voice,[a] the distinctive sound of his Tennessee Three backing band, a rebelliousness[6][7] coupled with an increasingly somber and humble demeanor, free prison concerts,[8] and a trademark look, which earned him the nickname "The Man in Black". Hurt. From Wikipedia, the free encyclopedia Hurt may refer to: Suffering or pain. 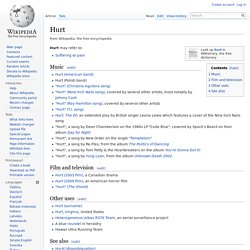 Here Without You. The song grew in popularity following the start of the Iraq War, and became an anthem for deployed troops and their families and friends at home.[3] Content[edit] Brad Arnold states that the main inspiration for this song was his now ex-wife. 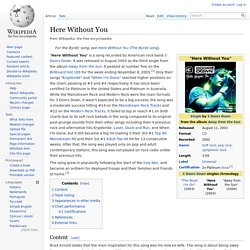 Tracks by The Jam – Free listening, videos, concerts, stats and pictures at Last.fm. Tom Petty. He has recorded a number of hit singles with the Heartbreakers and as a solo artist, many of which remain heavily played on adult contemporary and classic rock radio. 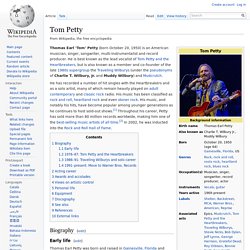 His music has been classified as rock and roll, heartland rock and even stoner rock. His music, and notably his hits, have become popular among younger generations as he continues to host sold-out shows.[1] Throughout his career, Petty has sold more than 80 million records worldwide, making him one of the best-selling music artists of all time.[2] In 2002, he was inducted into the Rock and Roll Hall of Fame. Biography[edit] Early life[edit] In a 2006 interview on the National Public Radio program Fresh Air, Petty said that he knew he wanted to be in a band the moment he saw the Beatles on The Ed Sullivan Show.[6] "The minute I saw The Beatles on The Ed Sullivan Show -- and it's true of thousands of guys -- there was the way out. 1976–87: Tom Petty and the Heartbreakers[edit]

Tom Waits. Curtis Mayfield. Curtis Lee Mayfield (June 3, 1942 – December 26, 1999) was a soul, R&B, and funk singer-songwriter, guitarist, and record producer, who was one of the most influential musicians behind soul and politically conscious African-American music.[1][2] He first achieved success and recognition with the Impressions during the Civil Rights Movement of the late 1950s and 1960s, and later worked as a solo artist. 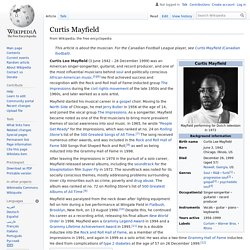 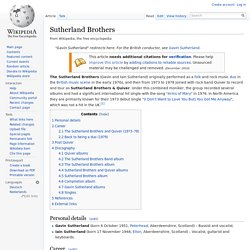 Back to being a duo (1979)[edit] The Sutherland Brothers parted company with Quiver (i.e., Wilson) by 1979, but continued to release material as the Sutherland Brothers for a time. The Kinks. The Kinks were an English rock band formed in Muswell Hill, North London, by brothers Dave Davies and Ray Davies with Pete Quaife in 1963. 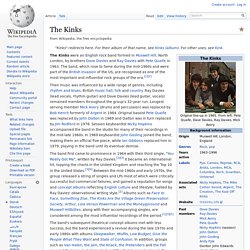 The band, which rose to fame during the mid-1960s and were part of the British Invasion of the US, are recognised as one of the most important and influential rock groups of the era.[1][2] History[edit] Formation (1962–63)[edit] 6 Denmark Terrace, the childhood home of the Davies brothers. Visible at right is the front room, where the family's frequent Saturday night parties were held. Thomas Kitts writes, "The influence of these parties on The Kinks ... is remarkable. The brothers attended William Grimshaw Secondary Modern School (later merged with Tollington Grammar School to become Fortismere School), where they formed a band, the Ray Davies Quartet, with Ray's friend and classmate Pete Quaife and Quaife's friend John Start. 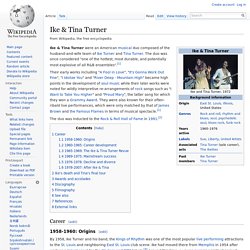 The duo was once considered "one of the hottest, most durable, and potentially most explosive of all R&B ensembles".[1] Their early works including "A Fool in Love", "It's Gonna Work Out Fine", "I Idolize You" and "River Deep - Mountain High" became high points in the development of soul music while their later works were noted for wildly interpretive re-arrangements of rock songs such as "I Want to Take You Higher" and "Proud Mary", the latter song for which they won a Grammy Award. They were also known for their often-ribald live performances, which were only matched by that of James Brown and the Famous Flames in terms of musical spectacle.[1] The duo was inducted to the Rock & Roll Hall of Fame in 1991.[2]

He is considered one of the greatest singers in the history of American popular music and a seminal artist in soul and rhythm and blues. His singing style was powerfully influential among soul artists of 1960s and helped exemplify the Stax sound. Redding's premature death devastated Stax. Already on the verge of bankruptcy, the label soon discovered that Atlantic Records owned the rights to his entire song catalog. Early life[edit] Charlie Parker. Charles Parker, Jr.

Elliott grew up inspired by the rodeos at Madison Square Garden, and wanted to be a cowboy. Encouraged instead to follow his father's example and become a surgeon, Elliott rebelled, running away from home at the age of 15 to join Col. Jim Eskew's Rodeo, the only rodeo east of the Mississippi. "Nobody I know—and I mean nobody—has covered more ground and made more friends and sung more songs than the fellow you're about to meet right now. With banjo player Derroll Adams, he toured the United Kingdom and Europe. Woody Guthrie. Many of his songs are about his experiences in the Dust Bowl era during the Great Depression when Guthrie traveled with displaced farmers from Oklahoma to California and learned their traditional folk and blues songs, earning him the nickname the "Dust Bowl Troubadour.

"[2] Throughout his life Guthrie was associated with United States Communist groups, though he was seemingly not a member of any.[3] Biography[edit] Eddie Cochran. Cochran was born in Minnesota and moved with his family to California in the early 1950s. He was involved with music from an early age, playing in the school band and teaching himself to play blues guitar.[4] In 1955, he formed a duet with the guitarist Hank Cochran (no relation), and when they split the following year, Eddie began a song-writing career with Jerry Capehart. Bill Haley & His Comets. Bill Haley & His Comets was an American rock and roll band that was founded in 1952 and continued until Haley's death in 1981. The band, also known by the names Bill Haley and the Comets and Bill Haley's Comets (and variations thereof), was the earliest group of white musicians to bring rock and roll to the attention of white America and the rest of the world.

From late 1954 to late 1956, the group placed nine singles in the Top 20, one of those a number one and three more in the Top Ten.[1] Little Richard. Al Jolson. Donovan. Donovan (born Donovan Philips Leitch; 10 May 1946) is a Scottish singer, songwriter and guitarist. The Beach Boys. The Beach Boys are an American rock band that were formed in Hawthorne, California in 1961. Small Faces. Small Faces were an English rock band from East London. Buddy Knox. Jimmy Bowen. James Albert "Jimmy" Bowen (born November 30, 1937) is an American record producer and former pop music performer. Bowen is a graduate of the University of Pennsylvania's Wharton School of Business and holds an MBA with honors from Belmont University.[1] He currently lives with his wife Ginger in Phoenix, Arizona.