Www.last.fm: excited pet shop boys. Apply Some Pressure - Maxïmo Park Song Lyrics. Do You Love Me - The Contours Song Lyrics. Por Una Cabeza - Carlos Gardel Song Lyrics. Monster. A monster is any creature, usually found in legends or horror fiction, that is often hideous and may produce fear or physical harm by its appearance and/or its actions. 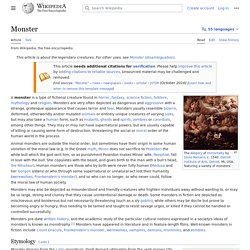 The word "monster" derives from Latin monstrum, an aberrant occurrence, usually biological, that was taken as a sign that something was wrong within the natural order.[1] The word usually connotes something wrong or evil; a monster is generally morally objectionable, physically or psychologically hideous, and/or a freak of nature. It can also be applied figuratively to a person with similar characteristics like a greedy person or a person who does horrible things.

The root of "monstrum" is "monere"—which does not only mean to warn, but also to instruct, and forms the basis of the modern English demonstrate. Thus, the monster is also a sign or instruction. Definitions[edit] A polemical allegory presented as a five-headed monster, 1618 Classic monsters[edit] Classic monsters spawn from legends and fictional stories.

Monsters? The Automatic - Monster WITH LYRICS. Cotton Club. The Cotton Club was a New York City night club located first in the Harlem neighborhood on 142nd St & Lenox Ave from 1923 to 1935[1] and then for a brief period from 1936 to 1940 in the midtown Theater District. 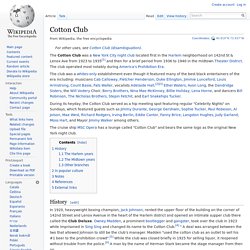 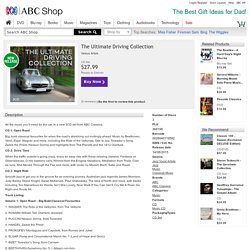 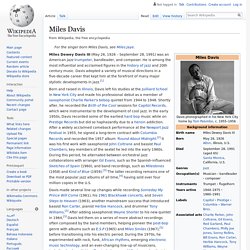 Widely considered one of the most influential musicians of the 20th century,[1] Miles Davis was, together with his musical groups, at the forefront of several major developments in jazz music, including bebop, cool jazz, hard bop, modal jazz, and jazz fusion. In 2006, Davis was inducted into the Rock and Roll Hall of Fame,[2] which recognized him as "one of the key figures in the history of jazz".[2] In 2008, his 1959 album Kind of Blue received its fourth platinum certification from the Recording Industry Association of America (RIAA), for shipments of at least four million copies in the United States.[3] On December 15, 2009, the U.S.

House of Representatives passed a symbolic resolution recognizing and commemorating the album Kind of Blue on its 50th anniversary, "honoring the masterpiece and reaffirming jazz as a national treasure".[4] List of artists featured on MTV Unplugged. From Wikipedia, the free encyclopedia Below is a list of musical artists, bands, and groups that have performed on the television series MTV Unplugged.[1] Performances by performance date[edit] 1989[edit] 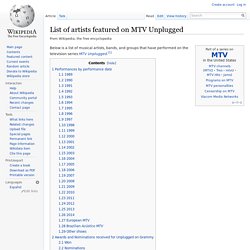 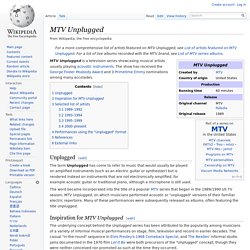 The show has received the George Foster Peabody Award and 3 Primetime Emmy nominations among many accolades. Unplugged[edit] The term Unplugged has come to refer to music that would usually be played on amplified instruments (such as an electric guitar or synthesizer) but is rendered instead on instruments that are not electronically amplified, for example acoustic guitar or traditional piano, although a microphone is still used.

The word became incorporated into the title of a popular MTV series that began in the 1989/1990 US TV season, MTV Unplugged, on which musicians performed acoustic or "unplugged" versions of their familiar electric repertoire. Many of these performances were subsequently released as albums, often featuring the title Unplugged. Have I Told You Lately. "Have I Told You Lately" is a hit song written by Northern Irish singer-songwriter Van Morrison and recorded for his 1989 album Avalon Sunset. 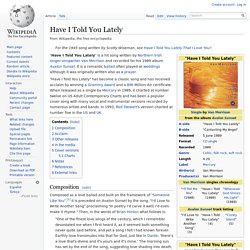 It is a romantic ballad often played at weddings although it was originally written also as a prayer. "Have I Told You Lately" has become a classic song and has received acclaim by winning a Grammy Award and a BMI Million-Air certificate. When released as a single by Mercury in 1989, it charted at number twelve on US Adult Contemporary Charts and has been a popular cover song with many vocal and instrumental versions recorded by numerous artists and bands. In 1993, Rod Stewart's version charted at number five in the US and UK. Eric Clapton and the Powerhouse. History[edit] What's Shakin'[edit] The Powerhouse only recorded a few songs in March 1966 (produced by Boyd), three of which were released on the Elektra compilation album What's Shakin' alongside tracks by The Lovin' Spoonful, Al Kooper, Tom Rush and The Butterfield Blues Band. 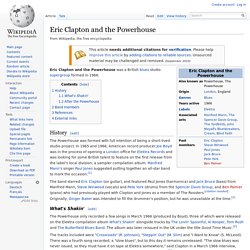 The album was later reissued in the UK under the title Good Time Music.[2] Due to contractual constraints, Winwood was credited as Steve Anglo in the original album's liner notes.[1] It has also been suggested that the song "I Want to Know" was in fact written by Jones under a pseudonym named for his wife, Sheila McLeod.[1] 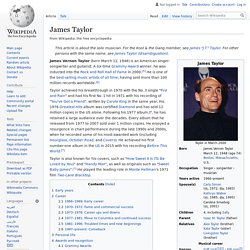 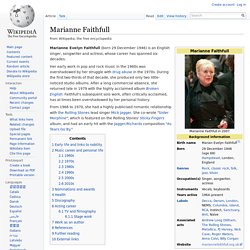 The album was recorded on 20 and 21 October 2000 at Madison Square Garden. An extended version was also released as a DVD, entitled One Night Only: The Greatest Hits Live at Madison Square Garden. The title is "one night only" because the recording equipment failed to tape most of the audio from the first night, leaving only the second night to be recorded as an album. In the U.S., it was certified gold in July 2001 by the RIAA. 17-11-70. 17-11-70 (US title 11-17-70) is the first live album by British singer-songwriter Elton John, released in 1971. Background[edit] The recording was taken from a live radio broadcast on 17 November 1970, hence the album's title. The recording was originally popular among bootleggers which, according to Gus Dudgeon, eventually prompted the record label to release it as an album.[3] It has been said that the release by an eastern bootlegger of the whole 60-minute aircast rather than the 48 minutes selected by Dick James Music significantly cut into the US sales of the live album.[4] However, the entire concert was an 80-minute affair, and double-LPs containing the entire concert were more common than those containing only 60 minutes.

Another contributing factor to the original album's soft sales could have been the glut of Elton John product on the market at the time. John and his band performed 13 songs during the radio broadcast. Track listing[edit] Elton John. Sir Elton Hercules John CBE (born Reginald Kenneth Dwight, 25 March 1947)[1][2] is an English singer, songwriter, composer, pianist, record producer, and occasional actor. He has worked with lyricist Bernie Taupin as his songwriter partner since 1967; they have collaborated on more than 30 albums to date. In his five-decade career Elton John has sold more than 300 million records, making him one of the best-selling music artists in the world.[3][4] He has more than fifty Top 40 hits, including seven consecutive No. 1 US albums, 58 Billboard Top 40 singles, 27 Top 10, four No. 2 and nine No. 1. For 31 consecutive years (1970–2000) he had at least one song in the Billboard Hot 100.

Rolling Stone's 500 Greatest Albums of All Time. "The 500 Greatest Albums of All Time" is a 2003 special issue of American magazine Rolling Stone, and a related book published in 2005.[1] The lists presented were compiled based on votes from selected rock musicians, critics, and industry figures, and predominantly feature American and British music from the 1960s and the 1970s. From 2007 onwards, the magazine published similarly titled lists in other countries around the world.

In 2012, Rolling Stone published a revised edition of the list drawing on the original and a later survey of albums in the 2000s.[2] It was made available in "bookazine" format on newsstands in the US from April 27 to July 25. The new list contained 38 albums not present in the previous one, 16 of them released after 2003. Background[edit] The first version of the list, published as a magazine in November 2003, was based on the votes of 273 rock musicians, critics, and industry figures, each of whom submitted a weighted list of 50 albums.