I typed my entire BlackBerry Passport review on the phone's tiny keyboard. Apparently I'm a masochist. 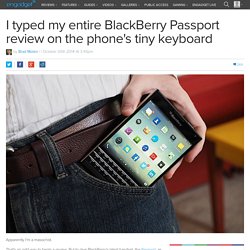 That's an odd way to begin a review. But to give BlackBerry's latest handset, the Passport, as thorough a review as possible, I decided to type the entire thing from the phone itself. My twisted idea came from a realization that this (mostly) square oddity is the first phone with a physical keyboard that I've used since the Motorola Droid 4 in 2012 or the BlackBerry Q10 in 2013.

It's not even a normal keyboard by modern smartphone standards -- it's a flattened, hybrid setup with both physical and virtual elements and a curiously placed space bar. Needless to say, it's an odd device, one that truly deserves the ultimate test: Can I use it to crank out several thousand words of text? Of course, there's more to the Passport than just its odd shape and the company's desire to resurrect a now-antiquated smartphone feature. 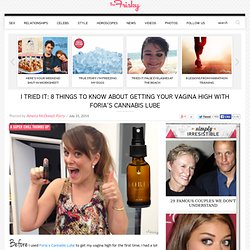 Is it going to be a high that’s similar to smoking weed? I love smoking weed. Or will it be more of a body high, like when you eat pot brownies? Oh shit, am I going to trip balls? Maybe I shouldn’t do this on a Tuesday. The truth is, it’s really kind of difficult to explain what it feels like to get your vagina high. I smoke weed. Now that we’ve gotten that out of the way, let’s get down to business. 1. 2. 3. 4. 5. 6. 7. 8. At $88 for 30 ml (approximately 30 “servings”) or $24 for 5 ml (about five servings), Foria is not cheap for a lube, but isn’t badly priced for something containing THC.

So, is Foria for you? Foria. The Pirate Bay - The galaxy's most resilient bittorrent site. Dvd Bruce Springsteen Born in the USA live tour. Downtown New Year Glamour Dress. Trench Dress. Night time in Paris Silk Dress. The Sleeping Beauty Trilogy. In 1994, the abridged audio versions of the books were published in cassette form. 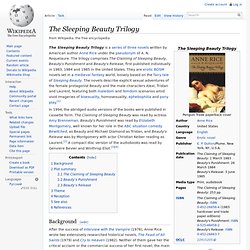 The Claiming of Sleeping Beauty was read by actress Amy Brenneman. Beauty's Punishment was read by Elizabeth Montgomery, well known for her role in the ABC situation comedy Bewitched, as Beauty and Michael Diamond as Tristan, and Beauty's Release was by Montgomery with actor Christian Keiber reading as Laurent.[2] A compact disc version of the audiobooks was read by Genviere Bevier and Winthrop Eliot.[3][4] Background[edit] The trilogy was written in the 1980s when many feminists denounced pornography as violation of women's rights, but Rice firmly believed that women should have the freedom to read and write whatever they pleased, and considered the trilogy her political statement.[10] Plot summary[edit] The Claiming of Sleeping Beauty[edit] In the castle Beauty meets another slave, Prince Alexi, with whom she copulates passionately. 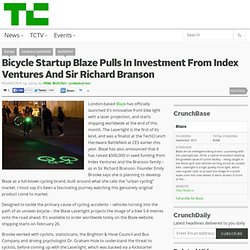 The Laserlight is the first of its kind, and was a finalist at the TechCrunch Hardware Battlefield at CES earlier this year. Blaze has also announced that it has raised $500,000 in seed funding from Index Ventures and the Branson family – as in Sir Richard Branson. Founder Emily Brooke says she is planning to develop Blaze as a full-blown cycling brand, built around what she calls the “urban cycling” market. I must say it’s been a fascinating journey watching this genuinely original product come to market. Designed to tackle the primary cause of cycling accidents – vehicles turning into the path of an unseen bicycle – the Blaze Laserlight projects the image of a bike 5-6 metres onto the road ahead.