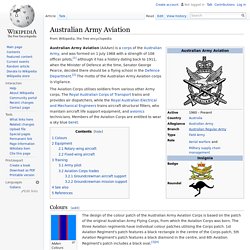 The Royal Australian Corps of Transport trains and provides air dispatchers, while the Royal Australian Electrical and Mechanical Engineers trains aircraft structural fitters, who maintain aircraft life support equipment, and avionics technicians. Members of the Aviation Corps are entitled to wear a sky blue beret. Army: Vehicles and Aircraft: MRH-90 helicopter - Defence Jobs Australia. List of Australian Army aircraft. This is a list of all aircraft operated by the Australian Army since its formation. 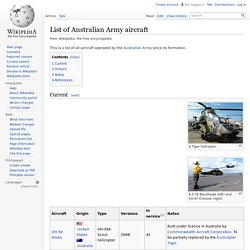 AgustaWestland Apache. The Apache was a valued form of close air support in the conflict in Afghanistan, being deployed to the region in 2006. 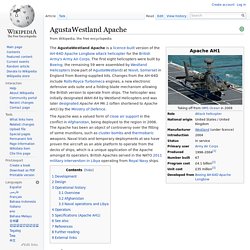 The Apache has been an object of controversy over the fitting of some munitions, such as cluster bombs and thermobaric weapons. Naval trials and temporary deployments at sea have proven the aircraft as an able platform to operate from the decks of ships, which is a unique application of the Apache amongst its operators. British Apaches served in the NATO 2011 military intervention in Libya operating from Royal Navy ships. Bell OH-58 Kiowa. The Bell OH-58 Kiowa is a family of single-engine, single-rotor, military helicopters used for observation, utility, and direct fire support. 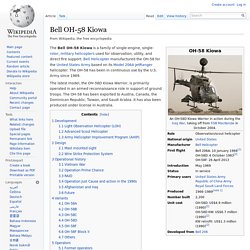 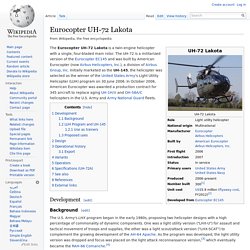 The UH-72 is a militarized version of the Eurocopter EC145 and was built by American Eurocopter (now Airbus Helicopters, Inc.), a division of Airbus Group, Inc. Initially marketed as the UH-145, the helicopter was selected as the winner of the United States Army's Light Utility Helicopter (LUH) program on 30 June 2006. In October 2006, American Eurocopter was awarded a production contract for 345 aircraft to replace aging UH-1H/V and OH-58A/C helicopters in the U.S. Army and Army National Guard fleets. Boeing–Sikorsky RAH-66 Comanche. The Boeing–Sikorsky RAH-66 Comanche was an advanced five-blade armed reconnaissance and attack helicopter designed for the United States Army. 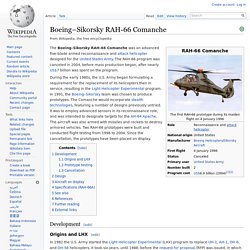 The RAH-66 program was canceled in 2004, before mass production began, after nearly US$7 billion was spent on the program. During the early 1980s, the U.S. Army began formulating a requirement for the replacement of its helicopters then in service, resulting in the Light Helicopter Experimental program. In 1991, the Boeing–Sikorsky team was chosen to produce prototypes. The Comanche would incorporate stealth technologies, featuring a number of designs previously untried. Development[edit] Origins and LHX[edit] M712 Copperhead. M712 Copperhead approaches a target tank Description[edit] At 62.4 kilograms (137.6 lb) and 140 centimetres (54 in) long, Copperhead is longer and heavier than traditional 155mm ammunition.[2] The warhead assembly consist of a shaped charge loaded with 6.69 kilograms (14.75 lb) of Composition B. 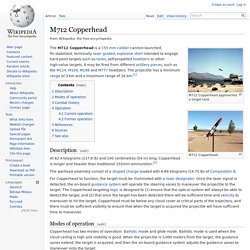 For Copperhead to function, the target must be illuminated with a laser designator. M982 Excalibur. The M982 Excalibur (previously XM982) is a 155mm extended range guided artillery shell developed by Raytheon Missile Systems and BAE Systems AB. 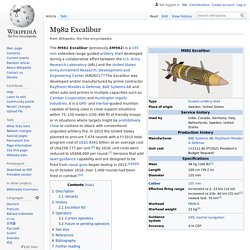 It is a GPS-guided munition capable of being used in close support situations within 150 metres (490 ft) of friendly troops. The United States plan to procure 7,474 rounds at a FY2015 program cost of $1,934.1m.[1] Description[edit] Eurocopter Tiger. The Airbus Helicopters Tiger, formerly known as the Eurocopter Tiger, is a four-bladed, twin-engined attack helicopter which first entered service in 2003. 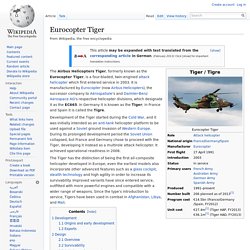 It is manufactured by Eurocopter (now Airbus Helicopters), the successor company to Aérospatiale's and Daimler-Benz Aerospace AG's respective helicopter divisions, which designate it as the EC665. In Germany it is known as the Tiger; in France and Spain it is called the Tigre. Development of the Tiger started during the Cold War, and it was initially intended as an anti-tank helicopter platform to be used against a Soviet ground invasion of Western Europe.

During its prolonged development period the Soviet Union collapsed, but France and Germany chose to proceed with the Tiger, developing it instead as a multirole attack helicopter. It achieved operational readiness in 2008. Sikorsky MH-53. The Sikorsky MH-53 Pave Low series is a long-range combat search and rescue (CSAR) helicopter for the United States Air Force. 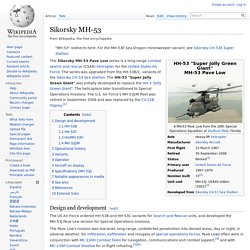 The series was upgraded from the HH-53B/C, variants of the Sikorsky CH-53 Sea Stallion. The HH-53 "Super Jolly Green Giant" was initially developed to replace the HH-3 "Jolly Green Giant". The helicopters later transitioned to Special Operations missions. The U.S. Véhicule Blindé Léger. The VBL is fully amphibious and can swim at 5.4 km/h; it is also air transportable by C-130, C-160 and A400M. It was developed during the 1980s and entered operational service in France in 1990. It has a fuel consumption of 16 litres per 100 km. Combat experience[edit] The VBL has been used in many peacekeeping operations, notably in Bosnia, Lebanon, Somalia and Kosovo.

In the 2000s and 2010s, the VBL has also been used by French forces in Ivory Coast, in Afghanistan and in Northern Mali. Véhicule Blindé Léger. AIM-92 Stinger. The AIM-92 Stinger or ATAS (Air To Air Stinger) is an air-to-air missile developed from the shoulder-launched FIM-92 Stinger system, for use on helicopters such as the AH-64 Apache, Eurocopter Tiger and also UAVs such as the MQ-1 Predator. The missile itself is identical to the shoulder-launched Stinger. Swingfire. Swingfire was a British wire-guided anti-tank missile developed in the 1960s and produced from 1966 until 1993.[1] Development[edit] Swingfire was developed by Fairey Engineering Ltd and the British Aircraft Corporation.