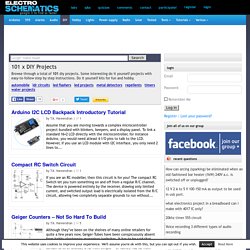 Hareendran | Assume that you are moving towards a complex microcontroller project bundled with blinkers, beepers, and a display panel. To link a standard 16×2 LCD directly with the microcontroller, for instance Arduino, you would need atleast 6 I/O pins to talk to the LCD. However, if you use an LCD module with I2C interface, you only need 2 lines to... Compact RC Switch Circuit If you are an RC modeller, then this circuit is for you! Geiger Counters – Not So Hard To Build Although they’ve been on the shelves of many online retailers for quite a few years now, Geiger-Tubes have been conspicuously absent from hobby electronics magazines/websites. Dehumidifier Hack by Jim Keith | What does one do when the electronic control of a modern dehumidifier goes south? DIY CAN Transceiver. Meter Check of a Transistor (BJT) : Bipolar Junction Transistors. Bipolar transistors are constructed of a three-layer semiconductor “sandwich” either PNP or NPN. 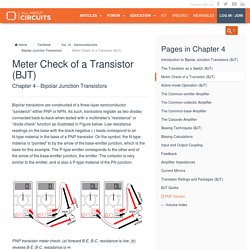 As such, transistors register as two diodes connected back-to-back when tested with a multimeter’s “resistance” or “diode check” function as illustrated in Figure below. The Intro - An Introduction To Analog Electronics - PyroEDU. Build Your Own Long-range WiFi Antenna for Less than $100 - Inside Practical Sailor Blog Article.

Posted by Darrell Nicholson at 11:13AM - Comments: (10) November 22, 2010 As most sailors have found, trying to use a typical laptop WiFi card to connect to a marina or yacht club hotspot doesn’t cut it. 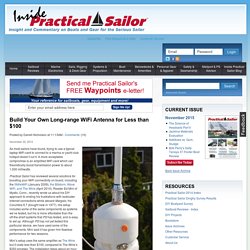 A more acceptable compromise is an amplified WiFi card which can theoretically boost transmission power to about 1,000 milliwatts. Practical Sailor has reviewed several solutions for boosting your WiFi connectivity on board, including the 5MileWiFi (January 2009), the Bitstorm, Wave WiFi, and The Wirie (April 2010). Reader Ed Mini of Mystic, Conn., recently wrote us about his DIY approach to ending his frustrations with lackluster Internet connections while aboard Margalo, his Columbia 8.7 (bought new in 1977). Mini’s setup uses the same amplifier as The Wirie but it costs less than $100, compared to The Wirie’s $250 pricetag. 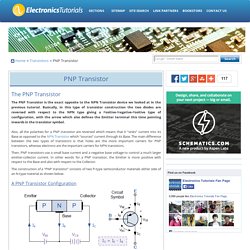 Basically, in this type of transistor construction the two diodes are reversed with respect to the NPN type giving a Positive-Negative-Positive type of configuration, with the arrow which also defines the Emitter terminal this time pointing inwards in the transistor symbol. Also, all the polarities for a PNP transistor are reversed which means that it “sinks” current into its Base as opposed to the NPN Transistor which “sources” current through its Base. The main difference between the two types of transistors is that holes are the more important carriers for PNP transistors, whereas electrons are the important carriers for NPN transistors. Electronics Tutorial. 101 - 200 Transistor Circuits. E-book. 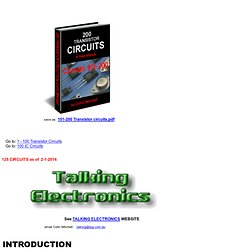 It contains a further 100 circuits, with many of them containing one or more Integrated Circuits (ICs). It's amazing what you can do with transistors but when Integrated Circuits came along, the whole field of electronics exploded. IC's can handle both analogue as well as digital signals but before their arrival, nearly all circuits were analogue or very simple "digital" switching circuits.

Let's explain what we mean. The word analogue is a waveform or signal that is changing (increasing and decreasing) at a constant or non constant rate. But let's crawl before we walk and come to understand how to interface some of these chips to external components. Colin Mitchell TALKING ELECTRONICS. To save space we have not provided lengthy explanations of how the circuits work. The Transistor Amplifier. TRANSISTOR PINOUTS: THE RESISTOR Before we go any further, we need to talk about the RESISTOR. 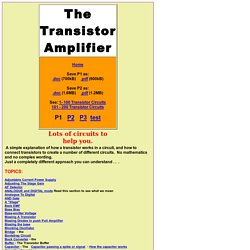