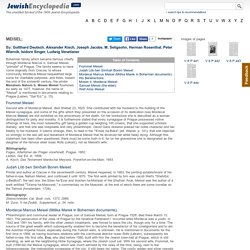 Samuel Meisel, "primate" of Prague. The family seems to have come originally from Cracow, to whose community Mordecai Meisel bequeathed large sums for charitable purposes; and there, toward the end of the sixteenth century, the printer Menahem Nahum b. Moses Meisel flourished. As early as 1477, however, the name of "Meisel" is mentioned in documents relating to Prague (Lieben, "Gal 'Ed," p. 15). Frummet Meisel: Second wife of Mordecai Meisel; died Shebaṭ 23, 1625. Bibliography: Foges, Altertümer der Prager Josefstadt, Prague, 1882; Lieben, Gal 'Ed, ib. 1856; A. Judah Löb ben Simḥah Bonim Meisel: Printer and author at Cracow in the seventeenth century.

One Course, Any Language. Organizaciones. What is an utterance? Castellano. LanguageNews.net: Latest news on language and linguistics. Computational Resources for Linguistic Research. This page lists computational tools for doing linguistics. 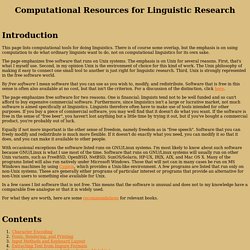 There is of course some overlap, but the emphasis is on using computation to do what ordinary linguists want to do, not on computational linguistics for its own sake. The page emphasizes free software that runs on Unix systems. The emphasis is on Unix for several reasons. First, that's what I myself use. Second, in my opinion Unix is the environment of choice for this kind of work. By free software I mean software that you can use as you wish to, modify, and redistribute. The page emphasizes free software for two reasons. Equally if not more important is the other sense of freedom, namely freedom as in "free speech". With occasional exceptions the software listed runs on GNU/Linux systems. In a few cases I list software that is not free. For what they are worth, here are some recommendations for relevant books. Unicode Information Unicode Organization The organization responsible for the Unicode standard.

UTF-8 Standard Unicode Chart. WALS - The World Atlas of Language Structures. Report for Berawan-Lower Baram. Diodorus Siculus. The Author The Text of Diodorus Siculus on LacusCurtius As usual, I retyped the text rather than scanning it: not only to minimize errors prior to proofreading, but as an opportunity for me to become intimately familiar with the work, an exercise which I heartily recommend. 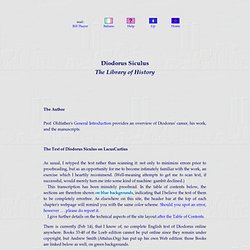 (Well-meaning attempts to get me to scan text, if successful, would merely turn me into some kind of machine: gambit declined.) This transcription has been minutely proofread. In the table of contents below, the sections are therefore shown on blue backgrounds, indicating that I believe the text of them to be completely errorfree. I give further details on the technical aspects of the site layout after the Table of Contents. There is currently (Feb 14), that I know of, no complete English text of Diodorus online anywhere. For the Greek text, the situation is somewhat similar. Edition Used, Copyright Loeb Classical Library, 12 volumes, Greek texts and facing English translation: Harvard University Press, 1933 thru 1967. Copiale. Kevin Knight, Beáta Megyesi, Christiane Schaefer The Copiale Cipher is a 105 pages manuscript containing all in all around 75 000 characters. 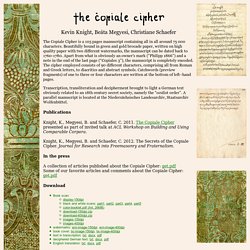 Beautifully bound in green and gold brocade paper, written on high quality paper with two different watermarks, the manuscript can be dated back to 1760-1780. Apart from what is obviously an owner's mark (“Philipp 1866”) and a note in the end of the last page (“Copiales 3”), the manuscript is completely encoded. The cipher employed consists of 90 different characters, comprising all from Roman and Greek letters, to diacritics and abstract symbols. Catchwords (preview fragments) of one to three or four characters are written at the bottom of left–hand pages. Transcription, transliteration and decipherment brought to light a German text obviously related to an 18th century secret society, namely the "oculist order". Publications.