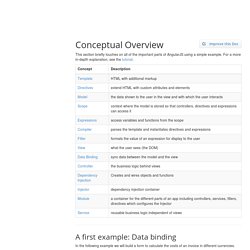 This section briefly touches on all of the important parts of AngularJS using a simple example. For a more in-depth explanation, see the tutorial. A first example: Data binding In the following example we will build a form to calculate the costs of an invoice in different currencies. Let's start with input fields for quantity and cost whose values are multiplied to produce the total of the invoice: Edit in Plunker <div ng-app ng-init="qty=1;cost=2"><b>Invoice:</b><div> Quantity: <input type="number" min="0" ng-model="qty"></div><div> Costs: <input type="number" min="0" ng-model="cost"></div><div><b>Total:</b> {{qty * cost | currency}} </div></div> Try out the Live Preview above, and then let's walk through the example and describe what's going on.

This looks like normal HTML, with some new markup. The first kind of new markup are the so-called "directives". The example above also contains a "filter". Adding UI logic: Controllers What changed? AngularJS Fundamentals In 60-ish Minutes. Ultimate guide to learning AngularJS in one day. Mastered this? 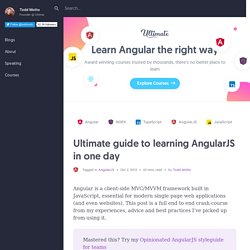 Try my Opinionated AngularJS styleguide for teams What is AngularJS? Angular is a client-side MVC/MVVM framework built in JavaScript, essential for modern single page web applications (and even websites). This post is a full end to end crash course from my experiences, advice and best practices I've picked up from using it. Terminology Angular has a initial short learning curve, you'll find it's up and down after mastering the basics. You've probably heard of MVC, used in many programming languages as a means of structuring/architecting applications/software.

Model: the data structure behind a specific piece of the application, usually ported in JSON. You'll then grab this information either from the server via an XHR (XMLHttp Request), in jQuery you'll know this as the $.ajax method, and Angular wraps this in $http, or it'll be written into your code whilst the page is parsing (from a datastore/database). View: The view is simple, it's your HTML and/or rendered output. ... 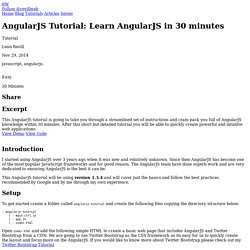 Since then AngularJS has become one of the most popular JavaScript frameworks and for good reason. The AngularJS team have done superb work and are very dedicated to ensuring AngularJS is the best it can be. This AngularJS tutorial will be using version 1.3.4 and will cover just the basics and follow the best practices recommended by Google and by me through my own experience.

To get started create a folder called angularjs-tutorial and create the following files copying the directory structure below. Breaking Down AngularJS to Smaller Components. Setting Up a MEAN Stack Single Page Application ♥ Scotch. Free Course Getting Started with Angular 2 Angular 2 is the shiny new framework that comes with a lot of new concepts. 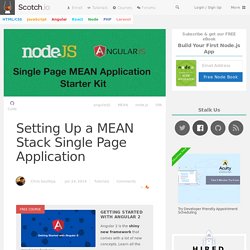 Learn all the great new features. Beginning an application from scratch can sometimes be the hardest thing to do. Node and Angular To-Do App ♥ Scotch. Learn Angular by Building a Gmail Clone. AngularJS Tutorial Build a Gmail Clone Introduction Build a simple email application and learn core AngularJS concepts. 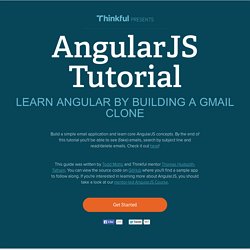 By the end of this tutorial you'll be able to see (fake) emails, search by subject line, and read / delete emails. Angularjs - A Hands On tutorial. This is a hands on tutorial on Angularjs. 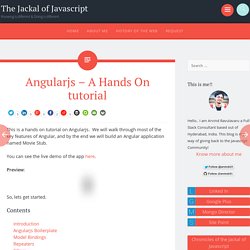 We will walk through most of the key features of Angular, and by the end we will build an Angular application named Movie Stub. You can see the live demo of the app here. A Shopping Cart Application Built with AngularJS. Introduction If you want to create any kind of on-line store, you will probably need a shopping cart. 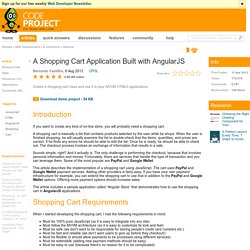 A shopping cart is basically a list that contains products selected by the user while he shops. When the user is finished shopping, he will usually examine the list to double-check that the items, quantities, and prices are correct. If he finds any errors he should be able to edit the list. Once he is ready, he should be able to check out. Sounds simple, right? Tutorial: Tutorial. Loading... 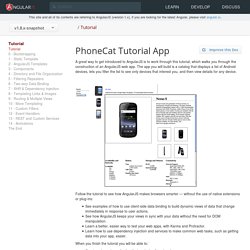 A great way to get introduced to AngularJS is to work through this tutorial, which walks you through the construction of an AngularJS web app. The app you will build is a catalog that displays a list of Android devices, lets you filter the list to see only devices that interest you, and then view details for any device. Follow the tutorial to see how AngularJS makes browsers smarter — without the use of native extensions or plug-ins: See examples of how to use client-side data binding to build dynamic views of data that change immediately in response to user actions.See how AngularJS keeps your views in sync with your data without the need for DOM manipulation.Learn a better, easier way to test your web apps, with Karma and Protractor.Learn how to use dependency injection and services to make common web tasks, such as getting data into your app, easier. Easy Node Authentication: Setup and Local ♥ Scotch.

This tutorial has been updating for ExpressJS 4.0. 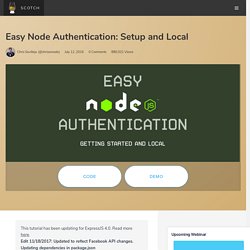 Read more here. Sort and Filter a Table Using Angular ♥ Scotch. We will be accomplishing this sorting feature using two of the variables that we created earlier ( $scope.sortType and $scope.sortReverse). 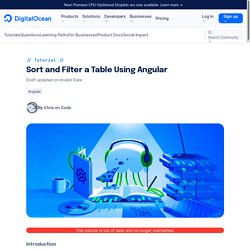 We will also be using the Angular orderBy filter. Basically, applying a combination of sortType and sortReverse variables to an orderBy clause in our ng-repeat will sort the table. Here’s the line that we will add to our ng-repeat code from our index.html file: ... That’s all we need to change the sort order of our ng-repeat. AngularJS 101: From Zero to Angular in Seconds. Translation: How to get a real-time app working with PubNub and AngularJS in 60 seconds or less. Here at PubNub, we’re huge fans of AngularJS. In the short time it’s been around, it has amassed a huge following and changed the way we build web applications. We thought it would be kind of cool to put together the smallest possible (but still interesting) sample application showcasing PubNub and AngularJS.

The result is a sample application that fits into 99 lines of HTML, of which less than 60 lines is JavaScript. If you’re used to coding your JavaScript in CoffeeScript, you can expect that to easily get cut in half. The source for the example lives here: In this blog post, we’ll walk you through the HTML section by section. AngularJS SEO with Prerender.io ♥ Scotch. Scotch.io books presents: MEAN Machine Learn the full JavaScript stack (MongoDB, ExpressJS, AngularJS, Node.js) from scratch. No experience necessary. Learn About the Book. Shaping up with Angular.js.