Coding Resources. E-Waste and the Future. Is Digital Education the Answer. Free VS. Open. Hacking and Civil Liberties. Infographics 101. Sherry Turkle. Amodern. ETER9 - Your Immortal Digital Life. The Living Cyberspace is an active community of interests, based on the concept of artificial life in cyberspace. 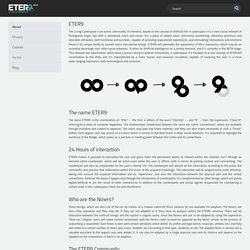 Top 10 Simple Things Every Computer User Should Know How to Do.

35 Books Every Designer Should Read. It doesn’t matter if you’re a student of design, or just someone who hears the term "design thinking" and stays quiet at meetings while noting to Google it later. 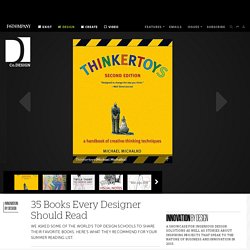 There’s always more you can learn about design to benefit whatever you do. So we reached out to professors at seven of the world’s top design schools to ask what books they recommend for getting your feet wet in design. The Industries Where Networking Matters More for Getting a Job. Google CS First. Starting a Solar Cooperative Teach-in. Webinar: What is a Worker Self-Directed Nonprofit? - Sustainable Economies Law Center. Question: What do you get when you cross a worker cooperative with a 501(c)(3) nonprofit? 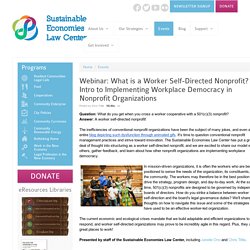 Answer: A worker self-directed nonprofit! The inefficiencies of conventional nonprofit organizations have been the subject of many jokes, and even an entire blog depicting such dysfunction through animated gifs. It’s time to question conventional nonprofit management practices and strive toward innovation. The Sustainable Economies Law Center has put a great deal of thought into structuring as a worker self-directed nonprofit, and we are excited to share our model with others, gather feedback, and learn about how other nonprofit organizations are implementing workplace democracy.

In mission-driven organizations, it is often the workers who are best positioned to sense the needs of the organization, its constituents, and the community. Presented by staff of the Sustainable Economies Law Center, including Janelle Orsi and Chris Tittle. Please register for "What is a Worker Self-Directed Nonprofit? Technology and Happiness. Allan Levite is a freelance writer residing in San Francisco, California. 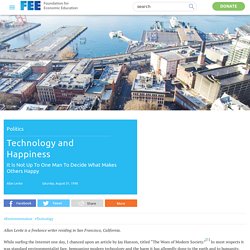 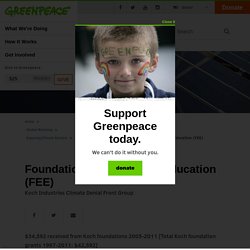 Unscientific skepticism and obstructionism regarding global warming are promoted both on FEE’s blogs and through The Freeman–including Willie Soon, whose grants since 2002 are exclusively from fossil fuel interests, and the promotion of two books by discredited industry apologist scientists Patrick Michaels and Robert Balling. The Foundation for Economic Education promoted a list created by Senator James Inhofe, who gets more political donations from Koch Industries than any other single source, naming 400 scientists who supposedly doubt the climate change scientific consensus.

Apple, Americans, and Security vs. FBI. This week's order by a federal magistrate judge requiring Apple to engineer new security flaws in its iPhone software operating system has prompted widespread and escalating controversy. 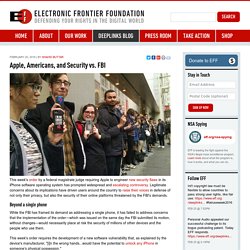 Legitimate concerns about its implications have driven users around the country to raise their voices in defense of not only their privacy, but also the security of their online platforms threatened by the FBI's demands. Beyond a single phone While the FBI has framed its demand as addressing a single phone, it has failed to address concerns that the implementation of the order—which was issued on the same day the FBI submitted its motion, without changes—would necessarily place at risk the security of millions of other devices and the people who use them.

This week's order requires the development of a new software vulnerability that, as explained by the device's manufacturer, "[i]n the wrong hands...would have the potential to unlock any iPhone in someone’s physical possession. " Beyond a single case. United States of Secrets. What to Put on Your Resume When You Have No Relevant Work Experience. Watch How This 1981 Film Accurately Predicted The Current State Of The World. Who Is a Maker? — Bright. Who is allowed to “make”? 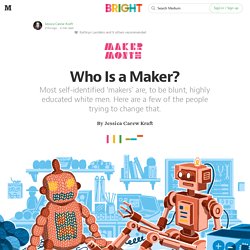 Who is celebrated for hand-fashioning all sorts of devices, objects, artworks and comestibles — and perhaps picking up some critical thinking skills in the process? These questions have been percolating in the “maker community” for some time — and gained relevance when 14-year-old Ahmed Mohamed was arrested last month after his homemade clock was mistaken for a bomb. Sherry Turkle’s ‘Reclaiming Conversation’ Photo. 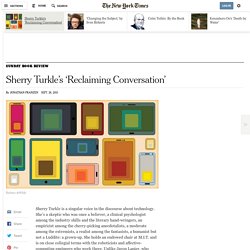 Artificial Neural Networks for Beginners » Loren on the Art of MATLAB. Deep Learning is a very hot topic these days especially in computer vision applications and you probably see it in the news and get curious. 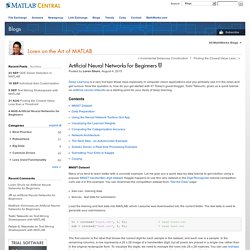 Now the question is, how do you get started with it? Today's guest blogger, Toshi Takeuchi, gives us a quick tutorial on artificial neural networks as a starting point for your study of deep learning. Contents.