Will Technology Replace Thinking?  When you get to be 96 years of age the road ahead is short, so you look back at the road you have traveled for almost 100 years. 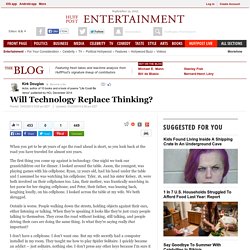 The first thing you come up against is technology. One night we took our grandchildren out for dinner. I looked around the table. Jason, the youngest, was playing games with his cellphone; Ryan, 12 years old, had his head under the table and I assumed he was watching his cellphone; Tyler, 16, and his sister Kelsey, 18, were both involved on their cellphones too. Lisa, their mother, was frantically searching in her purse for her ringing cellphone; and Peter, their father, was leaning back, laughing loudly, on his cellphone. Outside is worse. I don't have a cellphone. What will become of our world in the next 100 years? I just realized that you're probably reading this on your computer or on your cellphone while you're driving or crossing the street. 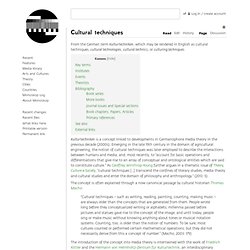 Kulturtechniken is a concept linked to developments in Germanophone media theory in the previous decade (2000s). Emerging in the late 19th century in the domain of agricultural engineering, the notion of cultural techniques was later employed to describe the interactions between humans and media, and, most recently, to "account for basic operations and differentiations that give rise to an array of conceptual and ontological entities which are said to constitute culture. " As Geoffrey Winthrop-Young further argues in a thematic issue of Theory, Culture & Society, "cultural techniques [..] transcend the confines of literary studies, media theory and cultural studies and enter the domain of philosophy and anthropology. " (2013: 5) The concept is often explained through a now canonical passage by cultural historian Thomas Macho: 13 March 2013, dusan Walter Benjamin became a published writer at the age of seventeen. 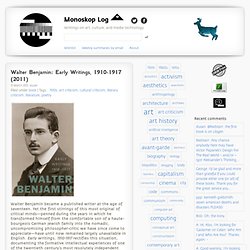 Yet the first stirrings of this most original of critical minds—penned during the years in which he transformed himself from the comfortable son of a haute-bourgeois German Jewish family into the nomadic, uncompromising philosopher-critic we have since come to appreciate—have until now remained largely unavailable in English. Early Writings, 1910-1917 rectifies this situation, documenting the formative intellectual experiences of one of the twentieth century’s most resolutely independent thinkers.

Here we see the young Benjamin in his various roles as moralist, cultural critic, school reformer, and poet-philosopher. Even at this early stage, a recognizably Benjaminian way of thinking comes into view—a daring, boundary-crossing enterprise that does away with classical antitheses in favor of the relentlessly-seeking critical consciousness that produced the groundbreaking works of his later years. Top 25 Nate Silver Facts. Gordon Gekko "Greed is Good" Speech. Milton Friedman - Greed. Geek is Good - Let's change the dictionary definition. Joaquin Phoenix finds real love with artificial intelligence in Spike Jonze's 'Her' (video)

When sci fi narratives explore artificial intelligence approaching a human level of sentience, they tend to focus on the negative (Skynet, anyone?). 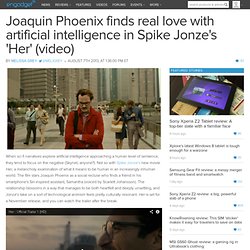 Not so with Spike Jonze's new movie Her, a melancholy examination of what it means to be human in an increasingly inhuman world. The film stars Joaquin Phoenix as a social recluse who finds a friend in his smartphone's Siri-inspired assistant, Samantha (voiced by Scarlett Johansson). The relationship blossoms in a way that manages to be both heartfelt and deeply unsettling, and Jonze's take on a sort of technological animism feels pretty culturally resonant. Her is set for a November release, and you can watch the trailer after the break. Comments. Right into an 'online' roadblock. Grand Theft Auto Online, an online multiplayer game that allows players to form gangs and complete new heists, is having some trouble getting the gamers online. 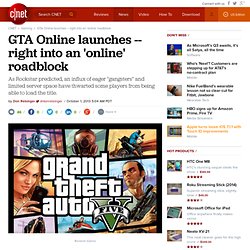 Millenarism. From memory to sexuality, the digital age is changing us completely. In this future, the past has been forgotten.

Not entirely: there are still a few rebels who cling to whatever memories they can pass on, in whispers and in defiance of the law. But all they have are fragments, many of them misremembered. Navigating their way around the ruins of a post-apocalyptic London, they travel up Great Poor Land Street looking for Kings Curse or Waste Monster (perhaps the latter name is not so mistaken). They gather in a slum they know as the Limpicks to worship the giant metal figure of the Red Man – unaware they are in the Olympic Village of 2012, bowing down to the Orbit. Such is the vision set out in Memory Palace, a new novella by Hari Kunzru and also the centrepiece of a V&A exhibition. That notion contains a warning about the fragility of memory. More troubling, perhaps, we are depriving future generations of the memory of us.