Download Over 240 Free Technical eBooks from Microsoft. The Three Essential Properties of the Engineering Mind-Set. JavaScript Modules: A Beginner’s Guide — Free Code Camp — Medium. If you’re a newcomer to JavaScript, jargon like “module bundlers vs. module loaders,” “Webpack vs. 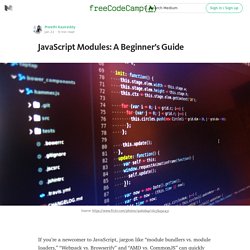 Browserify” and “AMD vs. CommonJS” can quickly become overwhelming. The JavaScript module system may be intimidating, but understanding it is vital for web developers. Before you learn to code, ask yourself why. By Maya ProhovnikCo-founder & Head of Growth at Glitter I feel strongly about the current “learn to code” movement for a number of reasons: 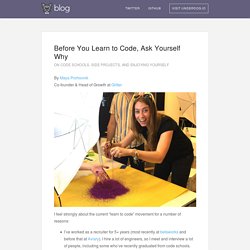 My favorite Codepen.io demos. With zero coding experience, artist building 180 webpages in 180 days. 117 days ago, having never done any programming in her life, Jennifer Dewalt built her first webpage. 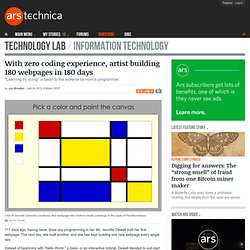 The next day, she built another, and she has kept building one new webpage every single day. Instead of beginning with "Hello World," a class, or an interactive tutorial, Dewalt decided to just start coding, she wrote on Wednesday, day 115 of her trial by fire. You Can Already Code - You Just Don’t Know It Yet. When someone tells you they code, it’s as if they’re calling you from inside the world’s most exclusive club. It’s probably a pretty great party in there, but you’ve got no idea how they got on the guest list and you’re fairly sure that even if they came out, floored the bouncer and physically carried you in, the bar staff would spot your trainers and you’d find yourself back on this side of the door in ten minutes.

Like speaking Chinese or perfecting the moonwalk, coding is just one of those things you’ll never be able to do. This, of course, is a complete myth. Bracelet Project_Made with Code. Write! - Distraction-Free Text Editor That Does Not Suck. Learn Android App Development. Introduction Smartphones have revolutionised the way we create and consume information. 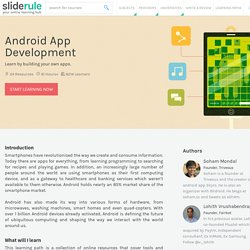 Today there are apps for everything, from learning programming to searching for recipes and playing games. In addition, an increasingly large number of people around the world are using smartphones as their first computing device, and as a gateway to healthcare and banking services which weren’t available to them otherwise. Android holds nearly an 85% market share of the smartphone market. Learn to Build Android Apps with This Curated Collection of Courses. On Repeat: How to Use Loops to Explain Anything. This article was co-published with Source. 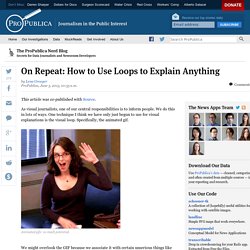 As visual journalists, one of our central responsibilities is to inform people. We do this in lots of ways. One technique I think we have only just begun to use for visual explanations is the visual loop. Specifically, the animated gif. Mike-twohy-i-m-afraid-that-kidney-went-to-somebody-who-can-write-code-new-yorker-cartoon.jpg (JPEG Image, 473 × 473 pixels) Learn to code for hardware: the Raspberry Pi Hacker Bundle. Schools around the world have adopted the Raspberry Pi as a tremendously effective platform for learning to code. 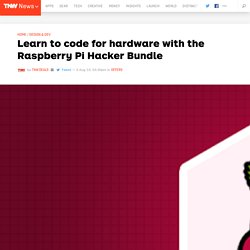 For the grownups, the Raspberry Pi Hacker Bundle will prepare you to start programming and building projects with the world’s favorite microcomputer. In the Introduction to Raspberry Pi course, you learn how to set up your Pi, before picking up simple programming commands in Python. These skills are reinforced with Pi-powered projects, such as a Christmas light display and a number-guessing game. Your Coding Style Is Like a Digital Fingerprint. What Art Can Teach you about Software and Programmers. Coding in the Classroom: 16 Top Resources. As cool as technology is, its intricacies and inner workings are sometimes intimidating, especially for young people who may be more interested in what technology can do for them rather than what they can do with technology. 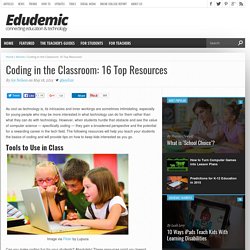 However, when students hurdle that obstacle and see the value of computer science — specifically coding — they gain a broadened perspective and the potential for a rewarding career in the tech field. The following resources will help you teach your students the basics of coding and will provide tips on how to keep kids interested as you go. Tools to Use in Class Can you make coding fun for your students? Absolutely! Edutopia presents a list of six resources designed to help parents get their kids interested in coding.

Learn To Code, Learn To Think : 13.7: Cosmos And Culture. Is learning to code software a valuable skill? 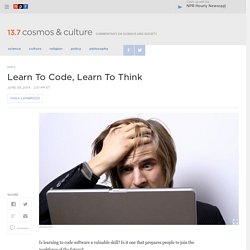 Is it one that prepares people to join the workforce of the future? On the one hand, the popularity of computer science as a college major and the proliferation of coding bootcamps suggest the answer is decidedly "yes. " Code.org, a non-profit that encourages education and diversity in computer science, currently invites visitors to its homepage to join over a million others in agreeing with the following statement: Google partners with Udacity to offer Nanodegree in Android development.

Google has launched a new effort, in partnership with online learning service Udacity, to help developers become more skilled and capable at developing for the Android platform. 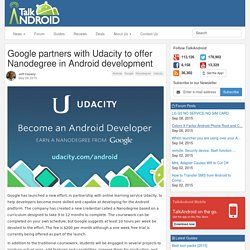 The company has created a new credential called a Nanodegree based on a curriculum designed to take 9 to 12 months to complete. The coursework can be completed on your own schedule, but Google suggests at least 10 hours per week be devoted to the effort. The fee is $200 per month although a one week free trial is currently being offered as part of the launch. In addition to the traditional coursework, students will be engaged in several projects to produce actual apps, add features and capabilities, prepare them for production, and implement Material design concepts. Skills in these areas will be developed using several sample apps that students will build during the course. Typing Practice for Programmers. Learn to Code for Free While Building Apps for Nonprofits. Startup Has a Clever Tool to Get Non-Techies to Code: Excel.

Paul Katsen worked at a consulting firm, and he was in charge of analytics. 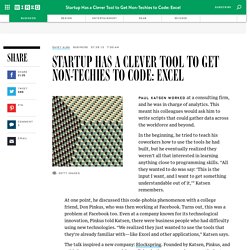 This meant his colleagues would ask him to write scripts that could gather data across the workforce and beyond. In the beginning, he tried to teach his coworkers how to use the tools he had built, but he eventually realized they weren’t all that interested in learning anything close to programming skills. “All they wanted to do was say: ‘This is the input I want, and I want to get something understandable out of it,'” Katsen remembers.

At one point, he discussed this code-phobia phenomenon with a college friend, Don Pinkus, who was then working at Facebook. Turns out, this was a problem at Facebook too. The talk inspired a new company: Blockspring. Essentially, the product is a series of coding tools, or APIs, that can be used from inside a spreadsheet. Here's the one thing everyone learning to code should do, no matter what. When learning a new programming language (maybe even your first!) , you’re going to have feelings of dread and despair. At some point, you won’t understand what’s going on with anything, and everything will make you want to flip your desk over and quit. You can make it easier on yourself by doing one key thing: take notes. Lots of notes. Find Opportunities to Learn Computer Science at Google's New Portal.

So You Want to Learn How to Code. So You Want to Learn How to Code Who knew one simple Medium post could ignite such a profound movement? #iLookLikeAnEngineer is now being spread globally in over 50 countries. It has received over 170,000 tweets and has been covered in countless news outlets. Omer Shapira on Twitter: "teaching artists C++ like... Dear Developer. Love, Designer. – The Humaan Blog. By Kylie Timpani Last month, a tweet by Yesenia Perez-Cruz, Senior Designer at Vox Media, caught my eye. Her tweet asked what seemed like a simple question: Usually, when these sorts of questions are asked on Twitter, there is an overwhelming variety of answers. While the answers varied, the majority of those who tackled the question proposed that the reason behind the lack of articles was due to the nature of the design/development process being sequential — work moves forwards not backwards. Pointing out that the process from designer to developer is a linear process does a great job of answering Yesenia’s question… if the question was asked 10 years ago.

Agile Software Development Process - 90 Months of Evolution. Three years ago I wrote an article that describes the changes in our Agile software development processes from 2008 to 2012. Three more years have passed by and our processes were not set in stone. Here I want to provide you with 90 months of changes in our product development practices, company culture, structure and engineering practices. Hope you will find it interesting and learn from our mistakes. We are still working on the Agile project management software Targetprocess. While we started three small side products last year, 90% of the company is focusing on Targetprocess. How to write great code (or maybe not) A Salute To Solo Programmers. Photo: Dominic Alves, Flickr. Python and Machine Learning. Facebook's New Spam-Killer Hints at the Future of Coding.

IF-hemingway-wrote-javascript. The following article was written by my good friend and colleague, [Angus Croll](//twitter.com/angustweets). Angus works on the web core team at twitter, talks at conferences around the world, and runs an amazing [blog](//javascriptweblog.wordpress.com) on javascript. Which Programming Language Should I Learn First? How hip hop can teach you to code.

Paul Ford: What is Code? A computer is a clock with benefits. Coding in the Common Core. There's been significant talk about "coding" lately -- from the second annual "Hour of Code" event hosted in December by Code.org, to countries like Denmark and England incorporating computer programming into their curriculum. Here in the U.S., there are several ways in which computer programming activities support the Common Core State Standards. Omer Shapira sur Twitter : "teaching artists C++ like... Coding Camp for Minority Boys Where Mentors Make a Big Difference. On the second floor of Morgan State University’s engineering building, Jacob Walker, 12, is putting the finishing touches on a ruler he’s just created.

Google for Education: Howww.to. Made With Code. Anybody can learn.