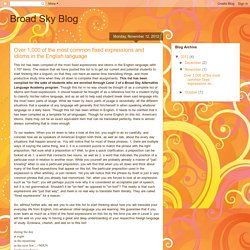 The reason that we have posted this list is to get our current and potential students to start thinking like a linguist, so that they can have an easier time translating things, and more productive study time when they sit down to complete their assignments. . Though this list in no way should be thought of as a complete list of idioms and fixed expressions, it however be thought of as a reference tool for a student trying to classify his/her native language, and as an aid to help said student break down said language into the most basic parts of usage. What we mean by language will generally find him/herself in when speaking whatever language on a daily basis. Though this list has been written in English, it needs to be clarified that it has been compiled as a template for languages.

During the day at night in the meantime in the next few…+NOUN for the time being. Time Traveler by Merriam-Webster: Search Words by First Known Use Date. 20+ Clever Illustrations Of ‘Same’ Words That You Probably Confuse Way Too Often. What happens when a frog's car breaks down? 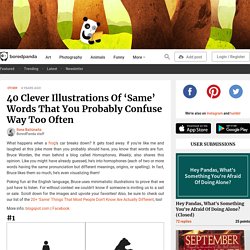 It gets toad away. If you're like me and laughed at this joke more than you probably should have, you know that words are fun. Bruce Worden, the man behind a blog called Homophones, Weakly, also shares this opinion. Like you might have already guessed, he's into homophones (each of two or more words having the same pronunciation but different meanings, origins, or spelling). In fact, Bruce likes them so much, he's even visualizing them! Poking fun at the English language, Bruce uses minimalistic illustrations to prove that we just have to listen.

Cambridge English: Advanced (CAE) Word Root Of The Day: ject. Unless anyone raises serious objections, today we are going to talk about the Latin root word ject which means ‘throw.’ 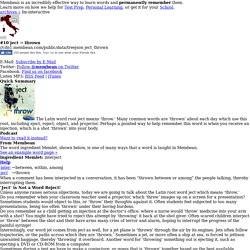 Do you remember when your classroom teacher used a projector, which ‘threw’ images up on a screen for a presentation? Sometimes students would object to this, or ‘throw’ their thoughts against it. Often students feel subjected to too many presentations, being too often ‘thrown’ under their boring burdens. Do you remember as a child getting an injection at the doctor’s office, where a nurse would ‘throw’ medicine into your arm with a shot?

You might have tried to reject this attempt by ‘throwing’ it back at the shot giver. Interestingly, our word jet comes from ject as well, for a jet plane is ‘thrown’ through the air by its engines. Sometimes during a test we have to make a conjecture, or guess that is ‘thrown’ together based on the best available evidence. Finnish comedian ISMO thinks "ass" is... - Conan O'Brien Presents: Team Coco. 50 Word Roots from Latin. The most common, everyday words in English have Germanic word roots (from the Anglo-Saxon that became Old English). 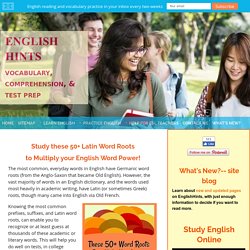 However, the vast majority of words in an English dictionary, and the words used most heavily in academic writing, have Latin (or sometimes Greek) roots, though many came into English via Old French. 4Save Knowing the most common prefixes, suffixes, and Latin word roots, can enable you to recognize or at least guess at thousands of these academic or literary words. This will help you do well on tests, in college courses, and in business. You will also find English reading more enjoyable. The list below includes 50 Latin word roots, each with a few examples of the English words made from it. A number of negative forms have also been included.

The list begins with a demonstration of how prefixes can be added to a root to change the meaning, using the root 'mittere,' since it takes so many prefixes.. Z250 - Word Roots L - N. (from: Bailey, B. 1999. 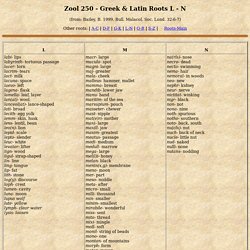 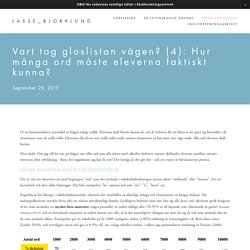