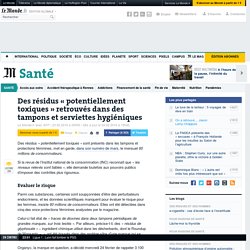 Hillary Clinton's Support for GMOs Confirmed by Gates Foundation. On Friday it was revealed that the global GMO promoters Cornell Alliance for Science, funded by the Bill and Melinda Gates Foundation, are giving Hillary Clinton as an example of one of the ‘powerful people‘ who supports GMOs and the Biotech industry worldwide. 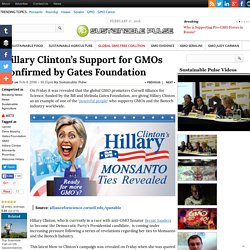 Source: allianceforscience.cornell.edu/quotable Hillary Clinton, who is currently in a race with anti-GMO Senator Bernie Sanders to become the Democratic Party’s Presidential candidate, is coming under increasing pressure following a series of revelations regarding her ties to Monsanto and the Biotech Industry. This latest blow to Clinton’s campaign was revealed on Friday when she was quoted on the Cornell Alliance for Science website as saying: “I stand in favor of using seeds and products that have a proven track record. There is a big gap between what the facts are and what the perceptions are.” More Hillary Clinton Biotech revelations. Portuguese Medical Association President Calls for Global Ban on Glyphosate. The President of the Portuguese Medical Association, José Manuel Silva, has called for a Global ban on the World’s most used herbicide, Glyphosate, over the many health concerns surrounding the chemical. 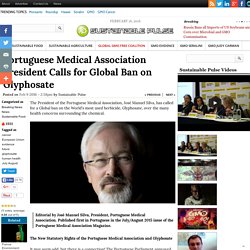 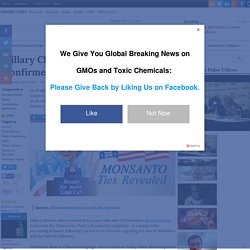 Source: allianceforscience.cornell.edu/quotable Hillary Clinton, who is currently in a race with anti-GMO Senator Bernie Sanders to become the Democratic Party’s Presidential candidate, is coming under increasing pressure following a series of revelations regarding her ties to Monsanto and the Biotech Industry. This latest blow to Clinton’s campaign was revealed on Friday when she was quoted on the Cornell Alliance for Science website as saying: “I stand in favor of using seeds and products that have a proven track record.

There is a big gap between what the facts are and what the perceptions are.” 7 Need-To-Know Facts About Genetically Modified Foods (GMOs) AnonHQ. Health by True Activist Even if you make responsible food choices, there’s a lot you likely don’t know about the food you’re consuming… By Dr. 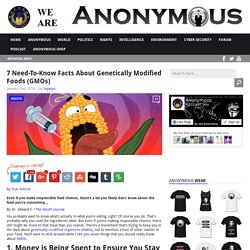 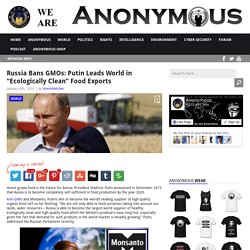 President Vladimir Putin announced in December 2015 that Russia is to become completely self-sufficient in food production by the year 2020. A Meeting of the Monsanto Masterminds. Dear Organic Consumer, In 2001, the biotech industry named Tom Vilsack (now USDA Secretary of Agriculture) “Governor of the Year,” thanks to his loyal support of Monsanto and all things GMO. 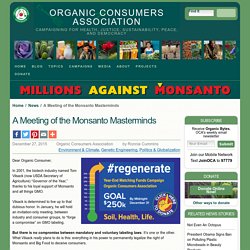 Vilsack is determined to live up to that dubious honor. In January, he will hold an invitation-only meeting, between industry and consumer groups, to “forge a compromise” on GMO labeling. Documents Reveal Canadian Teenager Target of GMO Lobby. At the time, Rachel Parent was 14 years old and had a growing social media following. 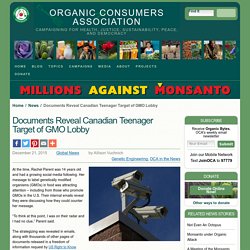 Her message to label genetically modified organisms (GMOs) in food was attracting attention – including from those who promote GMOs in the U.S. ANALYSIS: Chipotle Is a Victim of Corporate Sabotage... Biotech Industry Food Terrorists Are Planting e.coli in Retaliation for Restaurant's Anti-GMO Menu. After observing recent events involving Chipotle and e.coli, here's my analysis of the situation: Chipotle's e.coli outbreaks are not random chance. 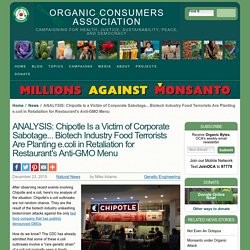 They are the result of the biotech industry unleashing bioterrorism attacks against the only fast food company that has publicly denounced GMOs. How do we know? The CDC has already admitted that some of these e.coli outbreaks involve a "rare genetic strain" of e.coli not normally seen in foods. Furthermore, we also know the track record of the biotech industry engaging in the most criminal, dirty, sleazebag tactics imaginable against any person or company that speaks out against GMOs. Doctor Oz, for example, was maliciously targeted in a defamation campaign funded by the biotech industry earlier this year. 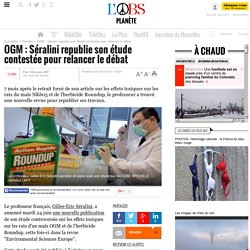 MIT Researcher’s New Warning: At Today’s Rate, Half Of All U.S. Children Will Be Autistic By 2025. Nick Meyer, althealthworks.com Research scientist Stephanie Seneff of the Massachusetts Institute of Technology (MIT), a widely published author on topics ranging from Azlheimer’s Disease to autism and cardiovascular disease, raised plenty of eyebrows recently with a bold proclamation on autism at a special panel in Massachusetts about genetically modified organisms and other topics. “At today’s rate, by 2025, one in two children will be autistic,” Seneff said last Thursday in Groton, MA at an event sponsored by the holistic-focused Groton Wellness organization. Seneff presented slides showing a remarkably consistent correlation between the rising use of Roundup (with its active ingredient glyphosate) on crops and the rising rates of autism; while it doesn’t show a direct correlation it does give researchers plenty to think about, especially considering Seneff’s research into the side effects of autism that mimic glyphosate toxicity and deficiencies.

Dr. Dr. TAKE ACTION: Tell Your Representative: Don’t Support Big Food’s Bill to Kill GMO Labeling Laws! Facebook. Pesticides néonicotinoïdes : Équiterre demande à Québec d’emboîter le pas à l’Ontario. Why the Use of Glyphosate in Wheat Has Increased Celiac Disease. For related articles and more information, please visit OCA's Health Issues page and our Millions Against Monsanto page. The use of glyphosate, the active ingredient in the broad-spectrum herbicide Roundup, has dramatically risen over the past 15 years, right in step with the use of GE crops. According to Dr. Stephanie Seneff, a senior research scientist at the Massachusetts Institute of Technology (MIT), glyphosate appears to be strongly correlated with the rise in celiac disease.

Dr. Anthony Samsel and Dr. She believes that glyphosate may in fact act as a transporter for aluminum (a common vaccine adjuvant) into the brain. Trecia Osadchuk Neal wants to Tell the USDA to Stop Dow Chemical’s "Agent Orange" Crops. OGM, l'heure de vérité ! MesOpinions TV. OGM, l'heure de vérité ! A petition to Whole Foods Market · Get GMOs Out of Whole Foods Market! We are encouraged by Whole Foods Markets' plan to support consumers' right to know by requiring labeling of all foods containing genetically modified organisms (GMOs) in its stores by 2018.

However, we are calling on Whole Foods to move up its labeling deadline to July 2015, and to take the lead in the organic industry to end deceptive labeling practices by requiring all the stores' products that include the word "natural" in their labeling or packaging to be GMO-free. We are pleased that Whole Foods has finally recognized consumers' right to know about GMOs.

This is a major victory for U.S. consumers who have for far too long been denied basic information which would enable them to make safe, healthy food choices. This also represents a major defeat for Monsanto and the rest of the biotech industry who have been deceiving consumers since they first conspired more than 20 years ago with the U.S. But the Whole Foods plan does not go far enough. Did the Anti-GMO Movement Really Lose in Washington?

For related articles and more information, please visit OCA's Millions Against Monsanto page . “But the ground we gained in Washington, in the form of votes, is nothing compared with the ground—in the form of soil and farms and fields—we plan to take back from Monsanto in the months and years ahead. Watch out, Monsanto. We have plans. And those plans include taking back our seeds, our food, our farms, our rights. Our health. Santé : Monsanto en Argentine, un bilan accablant. L'incendiaire se fait pompier : Monsanto modifie génétiquement les abeilles pour les sauver ! Santé : Monsanto en Argentine, un bilan accablant. (1) Dana Zimmerman - Photos du journal. Ask others to take the pledge with you. La stratégie diabolique des futures plantes OGM.

For related articles and more information, please visit OCA's Genetic Engineering page and our Millions Against Monsanto page. The so-called "Monsanto Protection Act" has been removed from a Senate spending bill to the delight of those opposed to the controversial provision. The provision would have stayed on the books under a continuing resolution passed by the House of Representatives last week, but U.S. Sens. Barbara Mikulski, D-Md., and Jeff Merkley, D-Ore., led a successful charge to have the language removed from the Senate version of the bill.