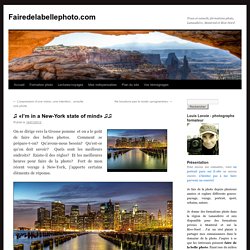 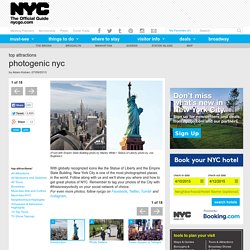 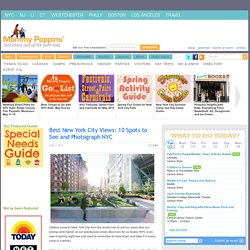 But even for us locals, NYC is an awe-inspiring sight (we just need to remember to slow down and take it in every once in a while). While tourists routinely flock to the Empire State Building or the Top of the Rock to literally look down on the city, there are less well known vantage points that also offer incredible views of NYC, including parks, promenades, museums and a tram.

So grab your camera and get ready to fall in love with New York City for the first time—or all over again. Fort Tryon Park and Fort Washington Park Riverside Drive to Broadway, 192nd Street to Dyckman Street; Riverside Drive to the Hudson River between 155 and 179th Streets FREE These large flower-filled parks in Upper Manhattan overlook the Hudson River. Hoboken, New Jersey $4 round-trip via PATH What's the only thing you can't get in Manhattan? 12 Best Places to Take Pictures in NYC. 7. 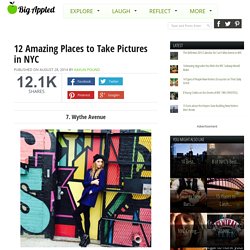 Wythe Avenue [itsgeorgiasumner | Intagram] For a background that really speaks volumes trek over to Wythe Avenue in Brooklyn and strike a pose in front the former bus grange that boasts a loud, letter-filled graffiti backdrop. 8. West Village [kpoundx3 | Instagram] For a nighttime photo op that gives off a truly magical feel make your way to the West Village. 9. [jasminenicole_smith | Instagram] If you’re looking for some cool colors to complete your background, make your way over to Bushwick where you can capture a vibrant, thought provoking picture by posting up along the mathematically influenced, modular mural created by Billy Mode and Chris Stain. 10.

12 Best Places to Take Pictures in NYC. Searching for the perfect spot to snap a selfie in NYC? 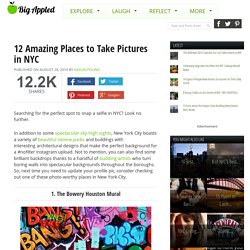 Look no further. In addition to some spectacular sky-high sights, New York City boasts a variety of beautiful serene parks and buildings with interesting architectural designs that make the perfect background for a #nofilter Instagram upload. Not to mention, you can also find some brilliant backdrops thanks to a handful of budding artists who turn boring walls into spectacular backgrounds throughout the boroughs. New York City, New York - Top Photo Spots. From the proud standing Statue of Liberty to the beautiful seasonal colors in Central Park to the would famous skyline, New York City is full beautiful places, things and people to photograph. 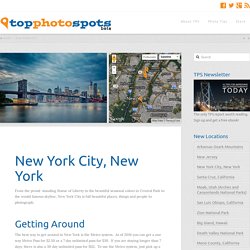 Getting Around The best way to get around in New York is the Metro system. As of 2014 you can get a one way Metro Pass for $2.50 or a 7 day unlimited pass for $30. If you are staying longer than 7 days, there is also a 30 day unlimited pass for $112. To use the Metro system, just pick up a map with your pass or, if you have a smart phone, load directions via Google Maps and then head down into the largely subterranean system that ties Manhattan and the surrounding Burroughs together. Photography Tips Many of the museums, historical buildings and even some of the area outside of the buildings, but still owned by companies such as Rocker Feller Plaza do not allow tripods.

Top 10 photo locations in New York City. I was lucky enough to visit NYC in early 2012, but unlucky enough to not have ShotHotspot to help me plan my trip. 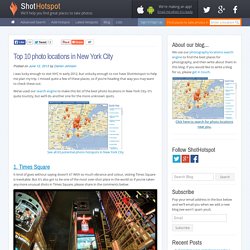 I missed quite a few of these places, so if you’re heading that way you may want to check these out. We’ve used our search engine to make this list of the best photo locations in New York City. It’s quite touristy, but we’ll do another one for the more unknown spots. Photogenic NYC: Where to Take the Best Photos of New York City. 10 Spots in NYC for the Ultimate Skyline Views - April 9, 2014 - NewYork.com. It’s a New York truism that for the best views of Manhattan, you need to rise above the island or leave it entirely. 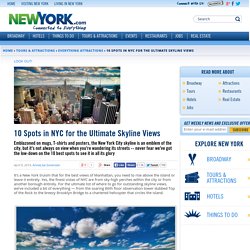 Yes, the finest vistas of NYC are from sky-high perches within the city or from another borough entirely. For the ultimate list of where to go for outstanding skyline views, we’ve included a bit of everything — from the soaring 86th floor observation tower dubbed Top of the Rock to the breezy Brooklyn Bridge to a chartered helicopter that circles the island. The view from Top of the Rock (Photo: Courtesy of Top of the Rock)