Past Tense Irregular Verbs English Grammar Game. Adverbs vs Adjectives Difference Grammar Game - Juego de la diferencia entre Adverbios y Adjetivos en Inglés. The past simple – regular verbs. The past simple is the most common way of talking about past events or states which have finished. 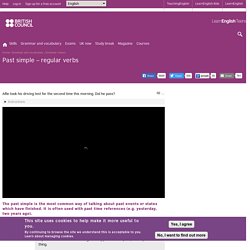 It is often used with past time references (e.g. yesterday, two years ago). Please explain past events or states! A past event could be one thing that happened in the past, or a repeated thing. I stopped at a zebra crossing. We carried on with the test. A state is a situation without an action happening. We stayed at my grandparents' house last summer. How do you form the past simple? Regular past simple forms are formed by adding -ed to the infinitive of the verb. start → startedkill → killedjump → jumped Yes, but there are some spelling rules. Agree → agreed like → liked escape → escaped If a verb ends in a vowel and a consonant, the consonant is usually doubled before -ed. stop → stopped plan → planned If a verb ends in consonant and -y, you take off the y and add -ied. try → tried carry → carried But if the word ends in a vowel and -y, you add -ed. play → played enjoy → enjoyed Aaagh! 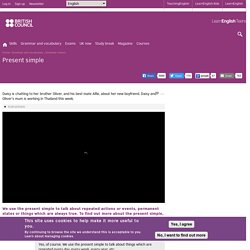 To find out more about the present simple, read and listen to the conversation below. Can you give me some examples? Yes, of course. We use the present simple to talk about things which are repeated every day, every week, every year, etc. I usually get up at 7 o'clock. I see. Yes, we often use adverbs of frequency sometimes, often, usually or other time expressions like on Mondays, twice a week or in the summer. What about permanent states? Permanent states are situations or feelings which are not temporary. I like him a lot.

We also use the present simple for general facts, for example when talking about science or geography. Thailand is really hot at this time of year. So what do I need to know about forming the present simple? The main thing is that the third person singular forms end in -s or -es. He watches black and white films at his cinema club on Wednesdays. Exactly! Personal pronouns and possessives. Oliver: Hey, Alfie. 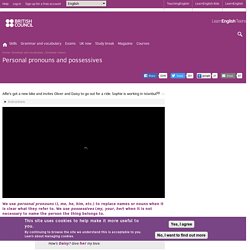 How's things? Alfie: Cool, great. You? What are you up to? Oliver: Me? Prepositions of Time AT ON IN English Grammar Game - Juego de las Preposiciones de Tiempo en inglés. There is / There are and It. We often use there + to be and It…as a subject but they do not refer to any object. 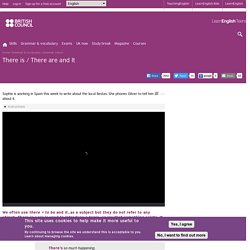 There is / are is used to introduce a topic, or say that something exists. It … is often used for the weather, time and distance. Can I have some examples of there is / there are, please? There's so much happening.Is there anything much going on at the moment? There are two new students in our class.There aren't any good football matches on TV this week. What about other tenses? No, you can change the tense. There were fire-breathing dragons in the streets.Were there any accidents? I'm a bit confused about when to use there is / there are and when to use it or they.

Have a look at these sentences. There's a good film on channel 2. So you can't use it or they as subjects in the first sentences? OK, but you can start some sentences with it, can't you?