Is Facebook Making Us Lonely? - Stephen Marche. Yvette Vickers, a former Playboy playmate and B-movie star, best known for her role in Attack of the 50 Foot Woman, would have been 83 last August, but nobody knows exactly how old she was when she died. 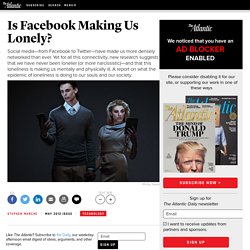 According to the Los Angeles coroner’s report, she lay dead for the better part of a year before a neighbor and fellow actress, a woman named Susan Savage, noticed cobwebs and yellowing letters in her mailbox, reached through a broken window to unlock the door, and pushed her way through the piles of junk mail and mounds of clothing that barricaded the house. Upstairs, she found Vickers’s body, mummified, near a heater that was still running. Her computer was on too, its glow permeating the empty space. The Los Angeles Times posted a story headlined “Mummified Body of Former Playboy Playmate Yvette Vickers Found in Her Benedict Canyon Home,” which quickly went viral. MCAT changes require additional courses of undergrads. Starting January 2015, the Medical College Admission Test will include a new section that will test pre-medicine students’ knowledge of psychology and sociology and incorporate biochemistry and statistics into previous sections of the exam. 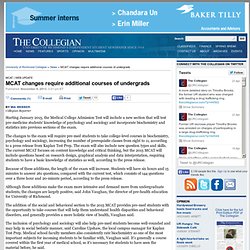 The changes to the exam will require pre-med students to take college-level courses in biochemistry, psychology and sociology, increasing the number of prerequisite classes from eight to 11, according to a press release from Kaplan Test Prep. The exam will also include new question types and skills. The current MCAT focuses on content knowledge and critical thinking, but the 2015 MCAT will include questions based on research design, graphical analysis and data interpretation, requiring students to have a basic knowledge of statistics as well, according to the press release. 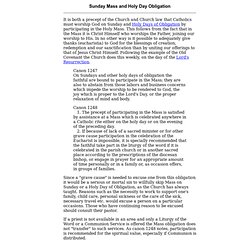 This follows from the fact that in the Mass it is Christ Himself who worships the Father, joining our worship to His. In no other way is it possible to adequately give thanks (eucharistia) to God for the blessings of creation, redemption and our sanctification than by uniting our offerings to that of Jesus Christ Himself. Connective Tissue Disorder: How Scoliosis, TMJ, Fibromyalgia, and Muscular Issues Relate to High Sensitivity. Article. Why aren’t vegetarians and pro-lifers more closely aligned? 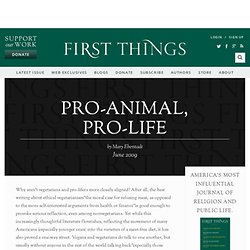 After all, the best writing about ethical vegetarianism”the moral case for refusing meat, as opposed to the more self-interested arguments from health or finance”is good enough to provoke serious reflection, even among nonvegetarians. Yet while this increasingly thoughtful literature flourishes, reflecting the movement of many Americans (especially younger ones) into the varieties of a meat-free diet, it has also proved a one-way street. Vegans and vegetarians do talk to one another, but usually without anyone in the rest of the world talking back”especially those committed to defending human life. A question for pro-lifers on the Feast of St. Francis: Should we rethink eating animals? Born Jorge Bergolgio, he took the papal name of Francis, in honor of St. 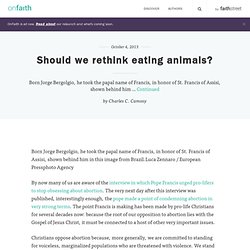 Francis of Assisi, shown behind him in this image from Brazil.Luca Zennaro / European Pressphoto Agency By now many of us are aware of the interview in which Pope Francis urged pro-lifers to stop obsessing about abortion. The very next day after this interview was published, interestingly enough, the pope made a point of condemning abortion in very strong terms. It's NOT my fault that I missed the chance to become a mother. Modern women are often blamed for leaving motherhood too late. 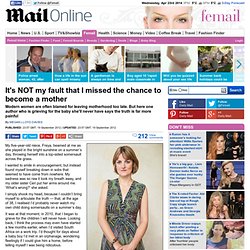 But here one author who is grieving for the baby she'll never have says the truth is far more painful By Megan Lloyd Davies Published: 23:57 GMT, 19 September 2012 | Updated: 23:57 GMT, 19 September 2012 Unlucky in love: Megan hasn't met the right man to have a child with. Nobody Cares About Cares About Your Big Gender Reveal. A couple of years ago, a good friend of mine was pregnant and having a hard time deciding whether to find out the gender of her child, or wait until he or she was born. 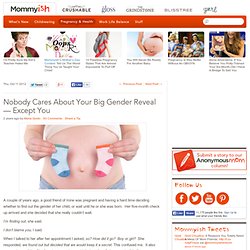 Her five-month check up arrived and she decided that she really couldn’t wait. I’m Thinking. Please. Be Quiet. How Technology Wrecks the Middle Class. Bill Pugliano/Getty ImagesRobot arms welded a vehicle on the assembly line at a General Motors plant in Lansing, Mich., in 2010. 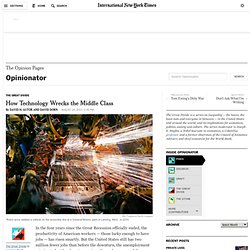 In the four years since the Great Recession officially ended, the productivity of American workers — those lucky enough to have jobs — has risen smartly. But the United States still has two million fewer jobs than before the downturn, the unemployment rate is stuck at levels not seen since the early 1990s and the proportion of adults who are working is four percentage points off its peak in 2000. This job drought has spurred pundits to wonder whether a profound employment sickness has overtaken us. And from there, it’s only a short leap to ask whether that illness isn’t productivity itself.