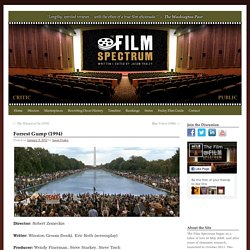 Is Forrest Gump a profound commentary like Kane, or an effects-driven romp like Roger Rabbit? As Entertainment Weekly wrote in 2004, “Nearly a decade after it earned gazillions and swept the Oscars, Robert Zemeckis’ ode to 20th-century America still represents one of cinema’s most clearly drawn lines in the sand. Plot Summary After breaking those chains, Forrest continues to defy the odds. Screenplay Premise. Tone. Structure. Dialogue. Lt. Career Roles. The Presidents that Forrest Gump Met - Steve Weber. Since 1971, the Presidents Day holiday has been observed on the 3rd Monday of February. 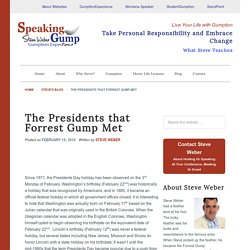 Washington’s birthday (February 22nd) was historically a holiday that was recognized by Americans, and in 1885, it became an official federal holiday in which all government offices closed. It is interesting to note that Washington was actually born on February 11th based on the Julian calendar that was originally used in the British Colonies.

When the Gregorian calendar was adopted in the English Colonies, Washington himself opted to begin observing his birthdate on the equivalent date of February 22nd . Lincoln’s birthday (February 12th) was never a federal holiday, but several states including New Jersey, Missouri and Illinois do honor Lincoln with a state holiday on his birthdate. It wasn’t until the mid-1980s that the term Presidents Day became popular due to a push from advertisers, but is still not a universal term as many states have different official designations for the day. The Adaptation of Forrest Gump. Symbolism Feather:Was a main object that linked through with many scenes through the movie. 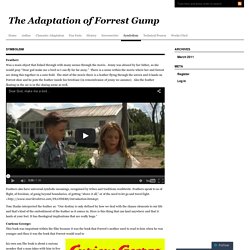 Jenny was abused by her father, so she would pray “Dear god make me a bird so I can fly far far away.” There is a scene within the movie where her and forrest are doing this together in a corn field. The start of the movie there is a feather flying through the screen and it lands on Forrest shoe and he puts the feather inside his briefcase (in remembrance of jenny we assume). Also the feather floating in the air is in the closing scene as well. Tom Hanks interpreted the feather as: “Our destiny is only defined by how we deal with the chance elements to our life and that’s kind of the embodiment of the feather as it comes in. Movie Teaching Process. Movie Teaching Process The Movie Teaching Process Curriculum was written by REEP teacher Ben Dunbar (while he was a Peace Corps Volunteer in Turkmenistan) and posted to the web with some changes by J.J. 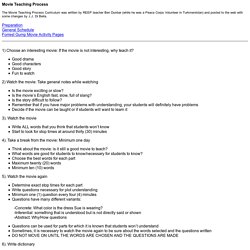 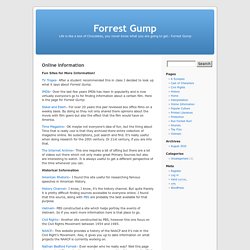 TV Tropes- After a student recommended this in class I decided to look up what it says about Forrest Gump. IMDb– Over the last few years IMDb has risen in popularity and is now virtually everyone’s go to for finding information about a certain film. Here is the page for Forrest Gump. Siskel and Ebert– For over 20 years this pair reviewed box office films on a weekly basis. By doing so they not only shared there opinions about the movie with film goers but also the effect that the film would have on America. Time Magazine– OK maybe not everyone’s idea of fun, but the thing about Time that is really cool is that they archived there entire collection of magazine online.

The Internet Archive– This one requires a bit of sifting but there are a lot of videos out there which not only make great Primary Sources but also are interesting to watch. Webquest Forrest Gump. A Webquest for grade 11/12 English Prepared by U. 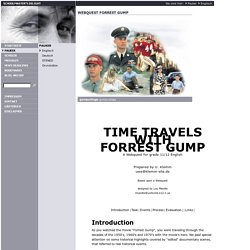 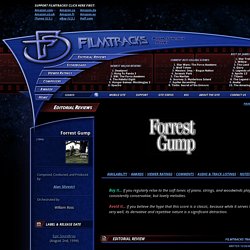 There could exist no two films more different in tone and style, one wholesome and tender, the other profane and disgusting. Ultimately, Forrest Gump prevailed and took home statues for six of its thirteen Oscar nominations, including the top four awards. It was also remarkable in both its ability to win over critics and audiences, not only receiving top marks from even the most cynical writers but also grossing a stunning $330 million domestically, a sum that easily placed it in the top ten films of all time. The film's story was one of honesty and redemption, using Tom Hanks' mentally impaired title character to offer perspectives on life and love that audiences found appealing. 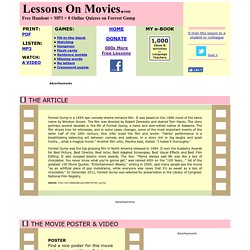 SIX WORDS: Look at the poster and write down six words (more if you like) that you think of as you look at it. Share the words with your partner(s). Why did you choose them? 2. STORY: Talk about what you think the story of the movie is – the start, beginning, end, etc. Forrest%20Gump. Forrest Gump At School - by Roland Schürmann. With your help.... always under construction Forrest Gump, ein Mensch mit einem eher "schlichten" Gemüt, sitzt an einer Bushaltestelle und erzählt den mit ihm Wartenden die Geschichte seines bisherigen Lebens Forrest schafft es rein zufällig, an nahezu allen bedeutenden geschichtlichen Ereignissen der amerikanischen Geschichte zwischen den 50er und 80er Jahren teilzunehmen und manche von ihnen sogar zu beeinflussen. 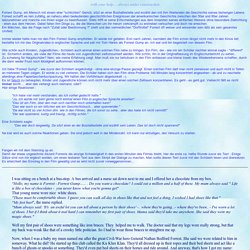 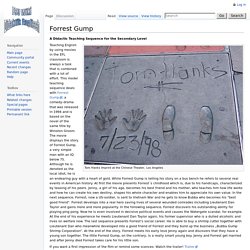 This model teaching sequence deals with Forrest Gump, a comedy-drama that was released in 1994 and is based on the novel of the same title by Winston Groom. The movie displays the story of Forrest Gump, a very simple man with an IQ below 75. Although he is denoted as the local idiot, he is an endearing guy with a heart of gold. If you want a first impression of the film or remind some scences: Watch the trailer!